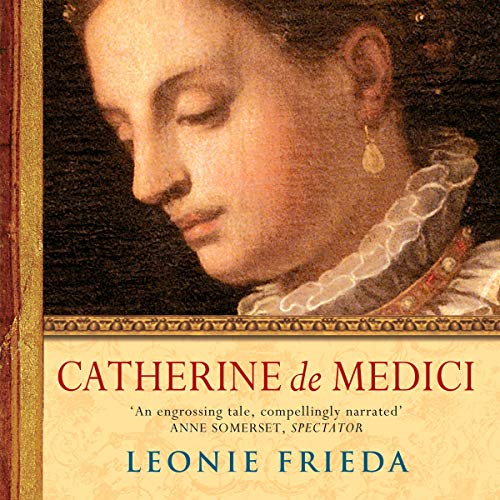 By: Leonie Frieda
Narrated by: Sarah Le Fevre
Try for £0.00

The best-selling revisionist biography of one of the great women of the 16th century.

Orphaned in infancy, Catherine de Medici was the sole legitimate heiress to the Medici family fortune. Married at 14 to the future Henri II of France, she was constantly humiliated by his influential mistress, Diane de Poitiers. When her husband died as a result of a duelling accident in Paris, Catherine was made queen regent during the short reign of her eldest son (married to Mary Queen of Scots, and like many of her children he died young). When her second son became king, she was the power behind the throne.

She nursed dynastic ambitions but was continually drawn into political and religious intrigues between Catholics and Protestants that plagued France for much of the later part of her life. It had always been said that she was implicated in the notorious Saint Bartholomew's Day Massacre, together with the king and her third son, who succeeded to the throne in 1574 but was murdered. Her political influence waned, but she survived long enough to ensure the succession of her son-in-law who had married her daughter Margaret.

Enjoyed crispness of book and its narration, funny person with French sounding surname but very anglais with the French prononcé. Very tightly coupled events to dates, people etc... Loved it... don't actually recall refs to Clarissa.. but I might be misremembering.
Would buy more by same author+narrator.. Bourbons maybe Ms Frieda?

Read a few books about women in the middle ages I'm not surprised at the brutality of some of them who managed to achieve and retain positions of power. Brilliant book about a strong woman, one of many. The narration coulda been better.

A fascinating insight into the life of this mythic and misunderstood matriarch. I'm so pleased an audible version has been recorded. 100% recommend!

Only for Non French Speakers

If you speak or know French at all, this might not be for you. I don't understand how they could choose a narrator with no knowledge of the French language or why she wasn't told how to pronounce pretty much any of the French names and expression and let her make such a horrible hash of them. How did she not even know how to pronounce the name Jeanne?! She pronounced it as if to rhyme with "rien" instead of rhyming with "Anne" and duchesse was duchée! It is so bad that it very nearly ruined the book for me, it really was excruciating!
Having said that, the story is interesting and kept me going and I dare say with a different narrator I would have given it a much higher score.

My first ever audio book

I'm not an eloquent reviewer like others here, I can only say that I thoroughly enjoyed my first audio book. I have read a lot about Catherine de Medici and I find her a fascinating woman. It's not that easy to respect someone you don't like very much, but she was a force of nature. I would have liked the author to delve deeper into the interpersonal relationships with and between Catherine's children, but realise she had a lot of ground to cover on the political and religious fronts. I do hope that Leonie Frieda next tackles Catherine's daughters, especially Marguerite.

The narrator, Sarah Le Fevre, is brilliant. She has a lovely soothing voice and articulates extremely well. I could listen to her for hours (wait, I did).

As with any detailed review of kings or queens the underbelly has the stench of avarice, conceit, and sorrow. Someone please show me a truly great king or queen. Perhaps Henry of Navarre? Catherine brought the Italian culture of charm, lies, spoiled sons, and clandestine murder to the french court. But she also understood the importance of protecting her reputation, something her children failed to follow. Watching her obsession with promoting her children and ignoring their detestable characters is disheartening. Watching the family squander exhoribitant sums on trivialities and ignore the act of governing is tough. No amount of charm and taste can make up for the misery the Valois wrought in this period. The book is well balanced and well read, though the french pronunciation is a little rough. An enjoyable but disheartening read.

Absolutely enthralling and informative book. A wonderful historical listen. As a bonus, the narrator has a lovely, soothing tone.

Firstly, the book is narrated absolutely brilliantly. The book is one of the best historical biographies I ever read, it offers a balanced assessment on Catherine de Medici life, not only her ruthless side but also her attempts at compromise. A portrait of a strong woman, of a survivor.