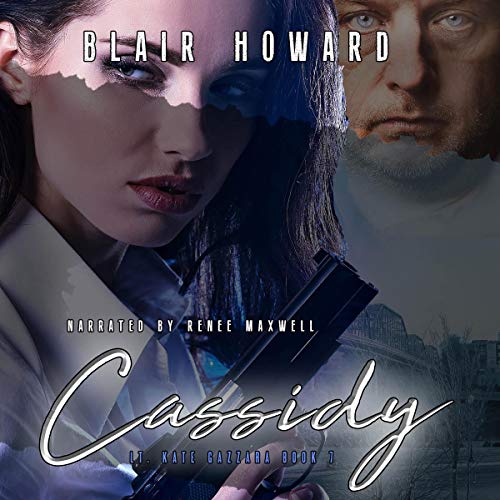 By: Blair Howard
Narrated by: Renée Maxwell
Try for £0.00

A string of murders. A killer on the hunt. A detective who can’t let go.

When a farmer discovers a man’s in the passenger seat of his car, Captain Kate Gazzara is called in to lead the murder investigation. A simple carjacking gone wrong? That’s what it looks like but, as we all know, looks can be deceiving.

So, Kate probes deeper and quickly discovers that her victim isn't the first, but only the latest in a string of murders going back over five years.

A pause-resister you won’t be able to stop listening to!

What listeners say about Cassidy

Couldn’t put it down

Cassidy (Lt. Kate Gazzara #6), my twelfth read from author Blair Howard and the seventh in the Lt. Kate Gazzara series. Well-written and enjoyable detective fiction, each book in the series better than the last. If I can find any fault it's that this book is somewhat shorter than the last 2, I enjoyed the extra length and the space for story development it offers. I was been given an Audible copy of this book & am voluntarily reading & reviewing it. Renée Maxwell's narration again adds to the book's enjoyment. I look forward to the next book in this series when it's published. (RIP Marley January 20, 2014 - July 24, 2018).

Wow Kate has a different kind of case in this book, and it was so interesting trying to come up with who could be guilty. I love that Kate is standing on her own in this story without Harry and hope that it will continue like this although a visit from Harry is nice once and a while. I am really starting to think that Janet may be the youngest and newest to Kate's team but she brings in sunshine. Although neither her or Kate are wearing sunglasses this story for the sunshine! I need to get on my computer and see what the next book is and whether it's available yet. I'm really enjoying this whole series!
I received a free download of this book from Audiobooks Unleashed. This review is my own honest opinion.

Captain Kate before leaving, the Chief tells her he knew the victim Jack Logan. Died from gun shot wounds, question why was he in the passenger seat. Remembers a case few years back Cappy Mallard similar markings. Wondered if other in the state had unsolved cases like these two or was she opening a.can of worms.
I like the way the author words flow, one doesn’t have to stop and figure out the meaning or persons. Great series, I like Kate,she is down to earth, thinks of her team and what they need. Given audio For my voluntary review and my honest opinion, the narration by Renee was great.