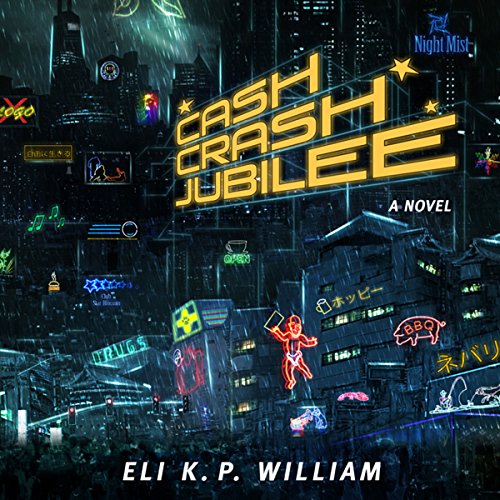 A cyber-dystopian thriller unlike any other. In a near-future Tokyo, every action - from blinking to sexual intercourse - is intellectual property owned by corporations that charge licensing fees. A BodyBank computer system implanted in each citizen records their movements from moment to moment and connects them to the audio-visual overlay of the ImmaNet so that every inch of this cyber-dystopian metropolis crawls with information and shifting cinematic promotainment. Amon Kenzaki works as a liquidator for the Global Action Transaction Authority. His job is to capture bankrupt citizens, remove their BodyBanks, and banish them to BankDeath Camps where they are forever cut off from the action-transaction economy. Amon always plays by the rules and is steadily climbing the Liquidation Ministry ladder.

With his savings accumulating and another promotion coming, everything seems to be going well until he is asked to cash crash a charismatic politician and model citizen and soon after is charged for an incredibly expensive action called "jubilee" that he is sure he never performed. To restore balance to his account, Amon must unravel the secret of jubilee but quickly finds himself asking dangerous questions about the system to which he's devoted his life, and the costly investigation only drags him closer and closer to the pit of bankruptcy. In book 1 of the Jubilee Cycle, Cash Crash Jubilee, debut novelist Eli K. P. William wields the incisive power of speculative fiction to show how, in a world of corporate finance run amok, one man will do everything for the sake of truth and justice.

Amazing first time author. Great idea on cyberpunk and corporations owning bodily actions and functions. Main characters well developed and the book moved on at a great pace. there's Only one problem: I've now got to wait a hear for the next part of the triology.

The idea that you are charged for every single action you do in life, is a little absurd and bothered me throughout the book. Once you move on from this though, the story does progress well and was interesting. At times it was a little too descriptive. Narration was very good.

I baught this book on a whim. There were no reviews, and i didn't see any other work from the author on Audible, but man what a great choice. I was drawn in almost immediately, and the story and characters were both entertaining and believable. That's also the damn problem! By the time the book is over, you're so damn invested, you're left ripping out your hair screaming for the second book! >_< Noooooooooo Amon Kenzakiiiiiiiii!!!!!!

The premise of this book was really interesting and I was excited to delve in. The thought of navigating a life where every action had a price was crazy to imagine and I was looking forward to how that process was laid out. This book paints a very nice picture of a post-cyberpunk world and for being set in Tokyo, the author does well with keeping the reader aware of the location.

However, he seems to love describing everything in extravagant detail, and while I think it is very important to lay a good visual foundation for a world so different from reality, sometimes it was too much. I have the physical copy of this book as well and descriptions of advertisements (advertainments?) often went on for a page and a half, sometimes two. When listening, I found myself zoning out for minutes at a time and missing almost nothing relating to the story. That, or the long descriptions made it difficult to even know what was going on. At first I was thinking that because one of the characters in the book speaks in purple prose, the extension to the general world was intended but I quickly began to doubt that because it just didn't make sense...

Speaking of, thanks to the gratuitous detail, the story doesnt actually kickstart until almost halfway through the book... By the halfway point, only three events of note had happened, and they weren't exactly groundbreaking. They were basically mundane events that offered some characterization, and one significant plot point.

Thankfully, after the turn of the plot, the descriptions got more bearable and the actual story sucked me in. Even so, when Amon had a long moment alone on a walk or something, once he looked up at the sky, I dreaded the next 3 or 4 minutes of non-stop purple prose.

If you can make it through all the "verbose verbiage" the narration was really good and the story IS interesting, if a bit of a slow burn. I will be tuning into the other two books in this trilogy because I really do want to know how everything pans out.

i cannot wait for the next novel :) this was such a great read! Thank you