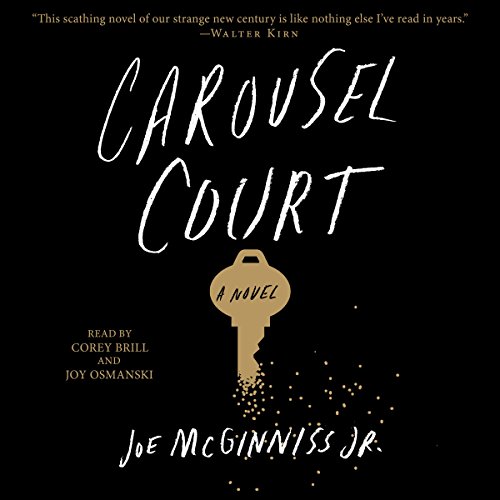 Here is one of the most engrossing, unnerving, and exhilarating novels in recent memory. It comes to us from Joe McGinniss, Jr., whose first book,The Delivery Man, was a national best seller that critics hailed as "searing" (The New York Times Book Review), "compelling" (The Washington Post), and "reminiscent of Joan Didion" (Janet Fitch). Now, after spending the better part of a decade at work, McGinniss returns with another viscerally absorbing look at the seductive - and destructive - cutting edge of modern life, this time through the lens of marriage.

Carousel Court is the story of Nick and Phoebe Maguire, a young couple who move cross-country to Southern California in search of a fresh start for themselves and their infant son following a trauma. But they arrive at the worst possible economic time. Instead of landing in a beachside property, Nick and Phoebe find themselves cemented into the dark heart of foreclosure alley, surrounded by neighbors being drowned by their underwater homes, who set fire to their belongings, flee in the dead of night, and eye one another with suspicion while keeping shotguns by their beds. Trapped, broke, and increasingly desperate, Nick and Phoebe each devise their own plan to claw their way back into the middle class and beyond. Hatched under one roof, their two separate secret agendas will inevitably collide.

Combining the excruciating honesty of Richard Yates's Revolutionary Roadwith the social urgency of George Packer's The Unwinding, Carousel Court is a blistering and unforgettable vision of contemporary life. It has the ambition of our most serious literary work and the soul of a thriller, managing to be simultaneously sexy, scary, and powerfully moving. Most of all it offers an unflinching portrait of modern marriage in a nation scarred by vanished jobs, abandoned homes, psychotropic cure-alls, infidelity via iPhone, and ruthless choices. No matter what kind of relationship you are in, it will leave you simultaneously gutted and grateful for your own good fortune - if perhaps curious about what your partner is really up to on that electronic device across the living room.

The wife Phoebe Maguire is a great character, one of my favorites in a long time. Anyone with addiction issues will totally get the focus of her life around her prescription pills. She's loopy on anxiety meds but still trying to be a good mom. She's totally dependent on their superstar Vietnamese nanny which is why they keep her even though they can't afford it's like the only thing she knows she can do right. Like many moms, Phoebe is struggling to do it all but she actually ends up doing really, really terribly - you can tell throughout that  someone is going to lose.


In the marriage though, Phoebe has all the power. For all her faults, she's strong, beautiful, trying to do it all, failing and trying again, and coming up with big (albeit farfetched) plans to save team Maguire. Meanwhile, her husband Nick has always looked up to her, even when she had an affair with a wealthy guy who keeps rearing his head on their marriage. I laughed when Phoebe sends Nick an email and he asks why she doesn't cc the other guy. The book is darkly funny. Nothing puts more pressure on a couple then money and house problems and McGinniss captures in brilliant prose the impact of the Great recession on the Maguires. We also meet the neighbors on carousel court who have their problems. A crazy guy across the street from them has started living in an orange tent in the front lawn as a self proclaimed, armed, neighborhood watch. Russian neighbors Kostya and Marina have a funny relationship and a tough as nails attitude about all the fear and worry everyone has.


The overall reading and accents were really well done. If you want to read about a complex, failing, yet trying hard wife in Phoebe Maguire then get this book. Phoebe is a character that stays with you. It reads a bit like a thriller but more like the story of a messy marriage.

Before I polish my thoughts...who slipped me the hallucinogenic? [Listening to] This book feels like coming out of a drugged dream state, running barefoot over crushed glass just a half step ahead of snarling demons. Reality is a hazy scene on the other side of a veil of graffiti, smoke and flames. Is this reality somewhere? Have I just been sitting with Alex and his droogs at the Korova Milkbar ?

Carousel Court reads like a dystopian action film more than the story of a young couple trying to make it through the financial crisis of 2000/2001. Lucky Nick and Phoebe got the last ticket on the final boat to Pleasure Island, took their dreams and bet high on their sudden good fortune and the phenomenal rise of the financial climate. When the bottom falls out and the jobs dissolve, the couple is sucked down, financially trapped in the lavish dream home they built to flip.

The neighborhood is riddled with similar dreamers, foreclosure signs and looters, swimming pools choked with green slime. An armed neighbor sleeps in a tent in his yard to ward off the bank-sanctioned home invasions, keeping a raging bonfire fueled with furniture and electronic equipment; aggressive coyotes prowl the half-vacant cul-de-sacs silhouetted by the blazing California canyon fires; mothers pack loaded pink pistols; swarms of cicadas seem to have crawled out of their hibernation to witness the urban apocalypse. Helicopters flying low overhead, the whirring and chirp of cicadas, the crackling of fires, gun shots and coyote howls...the soundtrack of Carousel Court. Inside their breathless home, Phoebe spirals into a self-medicating routine of fistfuls of Klonopin gulped down with bottles of booze. It's Escape from LA -- or at least some part of the Southern California dreamscape turned nightmare. It's Eurydice and Orpheus descending into Hell.

McGinniss Jr. keeps it on a low-burn for a good portion of the book taking you through this wreckage of the American Dream at a rubbernecker's pace. The stress poisons the marriage, as you would expect. Arguments between the couple are as frequent as collection calls, escalating in toxicity and actions. But tangled in the degradation, drugs and adultery, McGinniss Jr. gives us moments of tenderness that hover just below the tension. The moments are like a life-saving breath of fresh oxygen in a toxic cloud.

Almost battered by the abuse and depravity, and the slow build up created by the author, I wondered if I could finish the book. [I've been known to toss aside a read 400 pages in with only 25 pgs. to go.] I had to go on. One of the author's father's [Joe McGinniss Sr.] students was Bret Easton Ellis, an author whose style several critics mention when reviewing McGinniss Jr. Carousel Court had that same dark surreal sense as Less Than Zero, a book I loved, but it was a painful read. You almost surrender yourself to finish -- that's the power contained in this novel. If I see 1 * reviews, I'll understand as well as I do the 5* reviews. A rough but intriguing and very original novel superbly written. I'd recommend...to a limited audience.

...down to the husband named "Nick". Really wanted to like this but it was so slow-moving and so obviously attempting to be the next "Gone Girl".

I did not enjoy the book!

struggled to finish. the story was boring and too strange for my taste. the audio was done nicely though

Overall tone just so depressing. Kind of a Gone Girl light. Cared nothing about these characters.

This book is awful and boring masquerading as literature. I listened for a couple of hours, but had to give up when another female character, of course beautiful and athletic, was also described in conjunction with her panties. And then the male narrator - who is doing "Nick" as a Jack Nicholson imitation - starts doing a woman's voice in a high pitched baby squeak. This is one of those books where there's all this unnecessary and unrealistic high-minded drama, and it's supposed to be so deep. But really it's just a one note sex fantasy from a guy who attended a writer's workshop. This is just as formulaic as Stephen King circa Pet Semetery, just nothing fun happens. Well, there's angry sex, or pre-meditated power sex too. Do pharmaceutical reps really have to let doctors molest and proposition them in order to be successful? Men are more than their salaries and women are more than their reproductive organs. Let's retire this tired theme. If you want an excellent story about realistic people and their struggles, check out The Children by Ann Leary. Now, that's well-written.