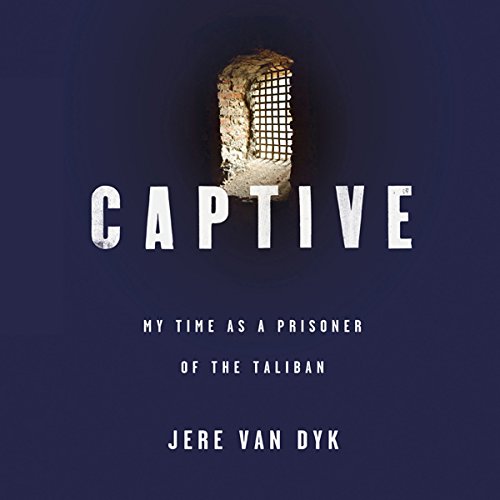 My Time as a Prisoner of the Taliban
By: Jere Van Dyk
Narrated by: Jere Van Dyk
Length: 9 hrs and 12 mins
Categories: Biographies & Memoirs, Art & Literature
4.8 out of 5 stars 4.8 (4 ratings)

An American reporter's chilling account of being kidnapped and imprisoned by the Taliban, in the no-man's-land between Afghanistan and Pakistan

Jere Van Dyk was on the wrong side of the border. He and three Afghan guides had crossed into the tribal areas of Pakistan, where no Westerner had ventured for years, hoping to reach the home of a local chieftain by nightfall. But then a dozen armed men in black turbans appeared over the crest of a hill. Captive is Van Dyk's searing account of his 45 days in a Taliban prison, and it is gripping and terrifying in the tradition of the best prison literature.

The main action takes place in a single room, cut off from the outside world, where Van Dyk feels he can trust nobody - not his jailers, not his guides (who he fears may have betrayed him), and certainly not the charismatic Taliban leader whose fleeting appearances carry the hope of redemption as well as the prospect of immediate, violent death. Van Dyk went to the tribal areas to investigate the challenges facing America there. His story is of a deeper, more personal challenge, an unforgettable tale of human endurance.

"Van Dyk's claustrophobic narrative jettisons journalistic detachment and views his ordeal through the distorting emotions of fear, shame, and self-pity. But in telling his story this way, he brings us viscerally into the mental universe of the Taliban, where paranoia and fanaticism reign, and survival requires currying favor with powerful men. The result is a gripping tale of endurance and a vivid evocation of Afghanistan's grim realities." (Publishers Weekly)

What listeners say about Captive

It was well worth the time. And particularly good for having been read by the author.

I appreciated this book as a interesting 1st hand look into the minds and ways of the Taliban.