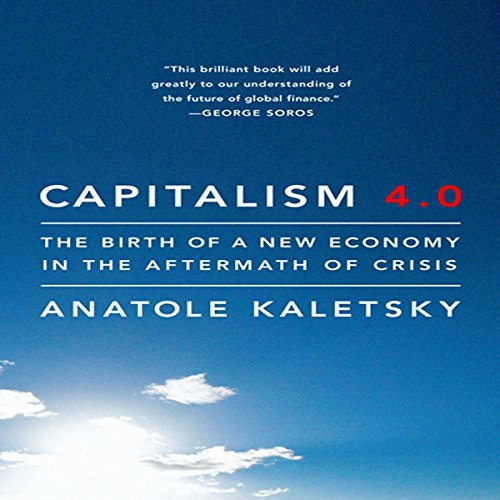 By: Anatole Kaletsky
Narrated by: Scott Peterson
Try for £0.00

Capitalism was not destroyed by the crisis, but it was irrevocably changed. This provocative audiobook shows how the forces that precipitated the financial meltdown of 2007-2009 are now creating a new and stronger version of the global capitalist system. This system will continue to be led and shaped by the U.S. if its businesses and politicians play their cards well.

The crisis that followed the collapse of Lehman Brothers marked the fourth systemic transformation of capitalism since the late 18th century. The first of these great transitions launched the century of classical capitalism from the Napoleonic Wars to the Great Depression. The second version of capitalism emerged in the 1930s with the New Deal and government-led Keynesian economics, but blew up in the great inflation of the 1970s. That crisis launched the third age of capitalism starting with the elections of Margaret Thatcher and Ronald Reagan in 1979-1980. This business-led period culminated in the “market fundamentalist” excesses of George W. Bush, Alan Greenspan, and Henry Paulson.

Market fundamentalism collapsed in 2008, but the crash has brought into play capitalism’s unerring instinct for self-preservation. As a result, the next version of the capitalist system is now evolving: Capitalism 4.0. But as the global economy is reinvented, will American-led democratic capitalism or Chinese-style state capitalism prevail?

In this wide-ranging and controversial audiobook, Anatole Kaletsky puts the upheavals of 2007-2009 in historical and ideological perspective. He describes the emerging features of the new capitalist model, explains how it will differ from previous versions, and suggests how the rise of Capitalism 4.0 could change politics, finance, international relations, and economic thinking in the coming decades.

“This brilliant book will add greatly to our understanding of the future of the world economy.” (George Soros)
"Hugely ambitious…. The overall impression is startlingly original. Kaletsky offers a genuinely new take on the credit crunch." ( Literary Review)
"His book is a major contribution to the debate on the nature of the market economy that needs to follow the practical failures of market fundamentalism." ( Financial Times)

What listeners say about Capitalism 4.0

The best book on finance

For a complete cohesive understanding of the credit crunch and its implications, listen to this book.
I've listened to over 20 different audio books on finance and nothing else comes close. You won't find emotional hogwash blurring the authors perceptions which is so prevalent in many other financial books. Just accurate and detailed analysis putting forward both sides of the argument.
The book also has to be commended on its reserved use of complex language, something that other books particularly George Soros Alchemy of Finance fall foul of. With language no more complex than it is necessary, this truly is a masterpiece.

Hard to listen to content because of voice over

The content of this book is actually quite interesting, but the voice over honestly sounds as if Siri is reading it. It ruined my experience of the book.

Slightly betrayed by Will Hutton

So Will Hutton has written this brilliant book "Them and Us" essentially about post-2008 Britain, and how things could be changed to create a fairer society. He appeared with Kaletsky on an "intelligence Squared" debate about capitalism. This piqued my interest in Kalentsky.

It's not a good book. His thesis is that there has been three previous iterations of capitalism, all of them valid, and we are now on to our fourth. It just doesn't hold up to even a casual analysis.

I have read other literary reviews of this book and likwise they knowledge that Kaletsky is a dreamer. I might better characterize it as blind optimism. Of course this guy is from England; England hasn't been a major world power for almost 100 years. It is this liberal government can fix everything mentality that so permeates much of European thinking. Of course George Soros wrote an excellent review of the book, Kaletsky drools all over himself in the book with praise of Soros. No doubt that capitalistic greed by investment bankers and brokerage firms was partly at fault for the 2008 economic collapse but Kaletsky wrongly believes that more government intervention and regulation can solve all of these problems. He is not only wrong, his unsupportable beliefs that government can fix and right all wrongs is comical.