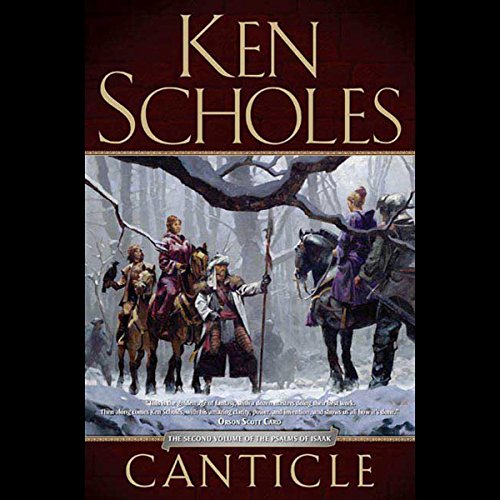 It is nine months after the end of Lamentation. Many noble allies have come to the Ninefold Forest for a Feast in honor of General Rudolfo's first-born child. Jin Li Tam, his wife and mother of his heir, lies in childbed. As the feast begins, the doors of the hall fly open and invisible assassins begin attacking. All of Rudolfo's noble guests are slain, including Hanric, the Marsh Queen's Shadow. And on the Keeper's Gate, which guards the Named Lands from the Churning Waste, a strange figure appears with a message for Petronus, the Hidden Pope.

Thus begins the second movement of The Psalms of Isaak, Canticle.

What listeners say about Canticle

I almost didn't read the first book in the Isaak series. Reviews were all over the map, from 2 to 5. But I'm glad I did. I enjoyed the intrigue and plotting and found the mix of technology and sorcery intriguing. Canticle is a much better written book, in my opinion. It does not have a lot of sword and sorcery, but it has a tightly woven plot, suspense, well developed characters and a slowly revealing story line. The book's two chapters of climax are superb. Narration is magnificent. I await the third book, Antiphon, which was just published. Audible, won't you order it? Scholes is a rising talent, one whose work is on par with other rising stars such as Brandon Sanderson.

I loved the first book, which was full of original characters, fascinating plot lines and a richly developed world, but this book is tedious in the extreme. The plot lurches forwards in scenes of blood and gore, followed by endless repetitive ruminations of the characters about their situation (he was filled with dread, he wondered how the world had changed ad nauseam) and minutely detailed descriptions of the most minor actions - rather as if instead of writing "he had breakfast", you would write, "and he regarded the fork considering its aspect. He lifted his arm and reached towards the fork. He felt its solid weight in his hand....and so on for another 10 pages. As in the previous book, the writing is beautifully detailed and the similes are brilliant, but there are far too many repetitions of "it was Wymer maze", "he pondered this Rufelo box". I realized I was forcing myself to listen to it and finally gave up at a scene of explicit torture. Where was the editor of this book? Bound and gagged in the basement? Mesmerized by a Rufelo box?

You will not be disappointed!

Excellent narration and excellent production bring the characters to life

Sci-fi of this caliber doesn't come along often. Scholes introduces us to a world where technology, in the wrong hands, in the distant past, has devastated much of the planet. A religious order, the Androfrancines, have total power over the careful, controlled release of technology recovered from this distant past. But who is really in control? The Androfrancines, the powerful Li Tam dynasty or is it those who have recovered knowledge of the forbidden Blood Magic?I stumbled on "Lamentation", the first book in the series and anxiously awaited release of the next two and have not been disappointed.

It has been a while since I listened to this but I felt I had to come to the aid of Canticle. I seriously enjoyed both the book and the narration. The book is original, something hard to find in the fantasy genre. The world it is set in is unique (in my experience). I love the steam-punk elements.

I can't say enough for the narrators. I usually don't enjoy a cast of voice actors but it is done very well here. This was a great follow up to Lamentation and I just picked up Antiphon in hardcover and will be starting and finishing it inside of a few days!!

Too much thinking going on!

I enjoyed the first book immensely, so looked forward to listening to the second.
The same characters are there with a few new ones. The narrations are interesting and relevant. The plots thickens. And yet... I found myself fast forwarding through passages as characters - well - just thought too much.
There was too much introspection to my taste and especially when some of the characters started thinking the same things!
I may go for the abridged version for the next one, which is normally not something I do.

The narrator at the start is tedious with his church like recitation of every line. Right away, I found the vocal quality to have a very painful resonance in the mid range that the sound engineer should have removed with some EQ. I loved the first book, and I think this would have been great if they hired a narrator who "got it." Do the publishers actually listen to the final product before releasing good books with bad and painful narration?

- boring
- uneventful
- mediocre language
- cheap effects
- good reading but does not save it...
- PAINFUL - sorry to have spent the money