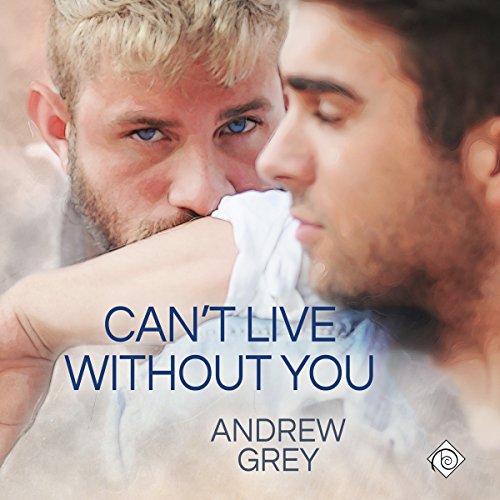 Can't Live Without You

By: Andrew Grey
Narrated by: Jeff Gelder
Try for £0.00

Justin Hawthorne worked hard to realize his silver-screen dreams, making his way from small-town Pennsylvania to Hollywood and success. But it hasn't come without sacrifice. When Justin's father kicked him out for being gay, George Miller's family offered to take him in, but circumstances prevented it. Now Justin is back in town and has come face to face with George, the man he left without so much as a good-bye...and the man he's never stopped loving.

Justin's disappearance hit George hard, but he's made a life for himself as a home nurse and finds fulfillment in helping others. When he sees Justin again, George realizes the hole in his heart never mended, and he isn't the only one in need of healing. Justin needs time out of the public eye to find himself again, and George and his mother cannot turn him away. As they stay together in George's home, old feelings are rekindled. Is a second chance possible when everything George cares about is in Pennsylvania and Justin must return to his career in California? First, they'll have to deal with the reason for Justin's abrupt departure all those years ago.

What listeners say about Can't Live Without You

The story is much better than the narration.

Although the story started out slowly for me, it turned out to be excellent. I just wish the narration had been better. It wasn't fluent and there were unnatural pauses that were irritating. The narrator seemed bored with the exception of the intimate scenes. He liked those and that made me laugh.

This was a sweet, sappy story with a good dose of reality that provided the angst and kept the men apart before the happily ever after.

I'll be honest, if I had read this book instead of listening to the audiobook, I probably would have given it 5 stars. I liked the characters, loved the supporting characters, the plot was good, pace was good, development was fantastic. I think it would've been hard not to give it 5 stars. However, the audiobook also had its strengths.

The narrator, Jeff Gelder, had a deep and smooth voice, but with some words he sounded a little nasally and I had a difficult time listening to this book for more than 45-60 minutes without having to take a break. Overall though, the narration was good. Jeff spoke clearly and did a great job of separating the characters from each other without tweaking his voice too much. I would recommend listening to the audio sample. You'll probably hear what I mean a lot better than I can describe it in words and it'll give you a good idea of whether or not you want to listen to his voice for another few hours. Just to be clear, I would definitely listen to this audiobook again and I wouldn't hesitate to buy a book with Jeff Gelder as the narrator, I just know I'll have to break it up so that I'm not listening to too much at one time.

Moving on, lets talk about Justin. Justin was the guy who packed his bags and got the hell out of his little home town as soon as he was able. He worked his ass off and made it big in Hollywood. Justin was under some crazy pressure to the best of the best at all times. He was stressed and spread so thin he was on the verge of snapping (and I don't blame him). But Justin was also honest and straightforward. He came by his success by working his ass off and taking all of the crappy long hours that nobody else wanted. And despite all of his success, he still feels lonely and he knows that something is missing in his life.I was drawn to Justin as a character immediately.

I kept listening to this book because, more than anything, I wanted to know why he left. What had impacted him so much that he would leave George behind with no "sorry," no note, no phone call, nothing. He just up and vanished like nothing had ever happened between them. When a character that is otherwise portrayed as a straighforward and honest guy does something like that, it becomes a hook that pulls you through the pages and lets you get lost in the story.

And when Justin's father dies, he is forced to go back to the town he swore he'd never return to, where he reunites with George, his old flame. This entire chapter was awkward at most. I almost died of embarassment for Justin. But despite how much Justin just wanted to get in and get back out, he just couldn't stay away. All of the old feelings he had for George resurfaced and Justin was left with a choice: do nothing and live the rest of his life chasing something he'll never have or see where things go with George, the only man he's ever had this kind of a connection to.

They both know that it can't go far, but they get so caught up in eachother and the time they do have that they don't really care. I loved Justin and George as a couple because they built eachother up, complemented eachother's strengths, and did their best to build on that. The chemistry and love that they have is all there right from the minute they see eachother again and neither one of them wants to let it go.

I would 100% recommend this book. If you like audiobooks, go get the audiobook, if you want to read it digitally or physically, you can do that too, but this was a fantastic second chance love story that you have to read!!!

What more is there to say:
Predictable romance novel read by the best in the business!

Can't Live Without You

Successful Hollywood star Justin has returned to the small town he lived in when his father is on his deathbed, and wishes to say goodbye. Justin hasn't heard from his father in years and hasn't forgiven him for kicking him out of the family so showing up at the hospital is not what he wants to do. Justin does his part and is ready to move on with his life, but still has to deal with his father's estate. While back in his hometown, he runs into George. George was his best friend and the man he loved as a teenager, but Justin left him and just disappeared without a word to George. Being around each other makes both George and Justin realize that they both still love the other, but they live completely different lives. Justin has to return to Hollywood and George is a nurse, and has his mom to care for. Both men have to deal with their past and figure out how they're going to have a future together.

I liked both Justin and George and really enjoyed the story. It was heartbreaking learning Justin's story, and what happened to make him leave everything behind and I was happy that both men were able to deal with what happened, and worked to have a life together.

The narrator of this book was Jeff Gelder. He had an easy to listen to voice, but his storytelling felt stilted. I wasn't able to just immerse myself in the story, it truly was just someone reading the book. I found the narrator gave weird pauses, and the flow and pace made the book hard to listen to.

I'd definitely recommend this book, whether in audio or book format is your choice. I think this story is another beautiful, complex story with two strong men working to find a happily ever after by the author. I think this is what the author does so wonderfully, taking non-perfect men and creating a perfect story for them. He creates a family and home, characters that you'd like to get to know better and hope they get everything they want.

2.5 stars- Promising storyline that ended up being

Can’t Live Without You has a pretty interesting premise within the second chance romance frame. Though I wouldn’t term it unique, it definitely captured my attention right away. Unfortunately, it didn’t hold my attention. I’m not entirely sure if it was an author or narrator issue, or maybe a combination of the two, but the story never took off for me.

The characters in this romance are high school sweethearts who reconnect after 7 years apart when Justin is summoned to his hometown by his dying father. It was appealing to see that despite the sudden unexplained departure, George and Justin still have a strong bond and instantly reconnect even though they live very different lives on opposite ends of the country. There wasn’t drawn out angst, denied or fighting feelings, and I anticipated a low drama romance that left me smiling. I liked both men instantly. Justin is a rising star in Hollywood, and it continually struck me how humble he remained especially when returning home and with George. The men fit so well together that even without much palpable chemistry, it seemed natural. I also liked that even with loving each other and acknowledging their unwavering connection, neither felt compelled to give up their lives to force a relationship to work. It was a bit different path than the typical romance, and I had high hopes.

This was my first book by this author and only experience with the narrator, so I’m not sure where things went wrong for me, but I struggled to connect. I hesitate to point to the narrator as the sole cause, but I do think he did a disservice to this book in terms of flow and pacing. Even when I was interested in the story, liked the characters, and wondered how things would progress, the narrator’s rhythm and pauses were awkward and stiff. I felt like I was being read to versus listening to a performance.

With as sweet a romance as this one was, with minimal conflicts that resolve rather smoothly and easy-going characters, I needed a narrator who embodied that uncomplicated tone so I fully appreciated the natural fit and chemistry. I wanted the audio to be as seamless as their love, and it wasn’t. The dialogue ended up feeling overly simplistic and choppy, the exchanges clumsy, and Justin and George’s passion never translated. I did think the plot and characters made sense and the book had a good story arc. Considering that and many of the reviews praising this as a sweet, low drama romance, I’m going to assume this was simply a narrator/story mismatch. I think if the blurb captures your attention, I’d lean toward the book versus the audiobook.

All we need is love

Beautiful! Loved this book so much. Amazing and heartwarming. Loved every second of this story!!