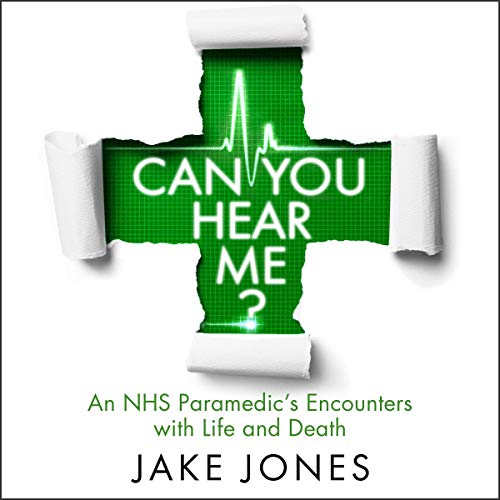 Can You Hear Me?

By: Jake Jones
Narrated by: Elliot Fitzpatrick
Try for £0.00

A young man has stopped breathing in a supermarket toilet. A pedestrian with a nasty head injury won't let the crew near him on a busy road. A newborn baby is worryingly silent. An addict urinates on the ambulance floor when denied a fix. This is the life of an ambulance paramedic.

Jake Jones has worked in the UK ambulance service for 10 years: every day, he sees a dozen of the scenes we hope to see only once in a lifetime. Can You Hear Me? - the first thing he says when he arrives on the scene - is a memoir of the chaos, intensity and occasional beauty of life on the front lines of medicine in the UK.

As well as a look into dozens of extraordinary scenes - the hoarder who won't move his collection to let his ailing father leave the house, the blood-soaked man who tries to escape from the ambulance, the life saved by a lucky crew who had been called to see someone else entirely - Can You Hear Me? is an honest examination of the strains and challenges of one of the most demanding and important jobs anyone can do.

What listeners say about Can You Hear Me?

I really enjoyed this book. What I did not enjoy was learning just what paramedics go through on a daily basis. It was a eye opener and It made me respect them. The narration was excellent and the book was very well written. The everyday events were interesting without being personal. I liked hearing the writer’s thoughts and experiences which broke up the chapters. It was frustrating, happy, sad and worrying. Still a great read though.

Written and read with humility and sensitivity, I really enjoyed this book and narration not just for the insight but for Jake's reflective comments on society's wider issues.

My best friend is a paramedic ( I myself a Community First Responder)
From beginning to end you get to see the human side of everything we in the Ambulance Service go through but not just how the crews see a situation Jake also invites you to be empathetic with the patient . A brilliant read Thank you Jake .

Great for stressed out paramedic students!...

As a student paramedic it was very amusing and comforting to hear some of these experiences, very enjoyable, funny and honest book! Would recommend it even if you're not a medical professional, great insight into the highs and lows of the job :)

Half way through, and here are my thoughts....

I was reluctant to buy this book as it had not been reviewed before. What a good job I did!
I'm only half way through but I wanted to thoroughly recommend this book. Its beautifully written, and very honest. It feels a privilege to read, as the depictions of incidents bring you right to that moment in time.
God's bless Ambulance crews, and all Emergency Service crews everywhere, as for such little pay, and sometimes none, they are the Angels that walk amongst us.

great book and amazing sharing of experiences. thanks for making me appreciate life even more

The stories gave an insight into the types of interactions and encounters the ambulance service face and range of calls that they respond to. It gives a mature and reasonable attitude towards different pressures and uses and misuses of the ambulance service. I highly recommend this audiobook.