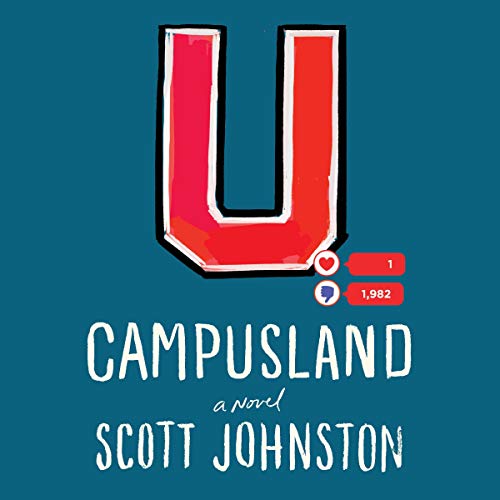 Joyous, fast and funny, Scott Johnston’s Campusland is a satiric howl at today’s elite educational institutions - from safe spaces to tribal infighting to the sheer sanctimony. A wickedly delightful audiobook that may remind you of Tom Wolfe and David Lodge.

Her room sucks. Her closet isn’t big enough for two weeks’-worth of outfits, much less her new Rag & Bone for fall. And there’s nothing worth posting. Cruel. To Lulu Harris - It Girl-in-the-Making - her first year at the ultra-competitive Ivy-like Devon University is a dreary impediment. If she’s fabulous and no one sees it, what’s the point?

To Eph Russell, who looks and sounds like an avatar of privilege (shh! - he’s anything but) Devon is heaven. All day to think and read and linger over a Welsh rarebit at The Faculty Club, not to mention teach English 240 where he gets to discuss all his 19th-century favorites, like Mark Twain. If Eph could just get tenure, he could stay forever, but there are landmines everywhere.

In his seventh year at Devon, Red Wheeler is the alpha dog on top of Devon’s progressive hierarchy, the most woke guy on campus. But when his position is challenged, Red is forced to take measures.

Before first term is halfway finished, Lulu bungles her social cache with her clubbable upperclass peers, and is forced to reinvent herself. Shedding her designer clothes, she puts on flannel and a brand-new persona: campus victim. For Lulu to claw her way back to the top, she’ll build a pyre and roast anyone in her way.

All paths converge as privileged, marginalized, and radical students form identity alliances, sacrifice education for outrage, and push varied agendas of political correctness that drags every free thought of higher learning into the lower depths of an entitled underclass.

"This high-spirited, richly imagined, and brave novel is a delight to read...Smart and hilarious." (Kirkus Reviews)

Shows how our University system will likely fail.<br />

if you spent any time in the University setting, you will totally get this slightly apocalyptic tale. The story shows what could happen if some of the politically correct narratives reached a fairly logical conclusion. it definitely pulls you in and is an interesting story and you begin to care about the characters. This book is for mature audiences.

Too close to truth to be funny....great tale.

Great satire. Well written. Didn’t want to put it down. The people I know who SHOULD read this book are too “smart “ to do so. The one criticism I have is your choice for reader. For a good part of the book every sentence sounds like a question or the recitation of a list. It’s more annoying than you can imagine. Thanks, Sidney Dicson

The Absurbaties of Current Campus Life

The author does a wonderful job of pinpointing the pettiness and absurdity of current day life on campus. The dialogue is well constructed and completely « real ». The story, I think, could be compressed a bit.

Couldn’t listen to it!!! Hated the narrator!!!!

Terrible narrator!!! Couldn’t even get through the 1st chapter! Totally too weird...needed a male voice & not this female!! Doesn’t connect to content!! Sadly couldn’t take it

What happens when political correctness runs amok... Started slow but continued to pick up steam - I looked for any excuse to keep listening.

Boy Did This Book Ever Need To Be Written!

SJW's the world over are probably bemoaning Campusland but I found it to be a breath of Springtime air. For one thing America is losing its sense of humor, which is tragic. Laughter is the single best thing for the soul. This book was full of laughs and irony, as it tore apart the ridiculousness of "woke" culture. I want to personally thank the author for writing it.

Just one thing, I removed a few stars for performance because I wasnt too fond of the narrators habit of ending each sentence on an up tone. But the book is so good I wasnt going to let that stop me from reading it.

Each sentence is read ending on a low note. The stress on the punctuation is strong enough to signify a chapter end. It's distracting.

The story line is wickedly good. It points out what a mess the system is in for all the wrong reasons. Status is everything.

This hilarious novel is one of a kind! The characters and various story lines are entertaining and endearing. I can’t recommend it enough.

I thought the subject would be interesting. I tried listening to the book but the narrator is the worst narrator I have ever heard ... the worst by far. I could not get past the horrible narration. End of story.

Casey Turner's amazingly annoying reading of this otherwise well done book, was so excruciating that a point, I just couldn't listen to her any longer. Speaking in an extremely boring monotone, she ended nearly every sentence on an up tone, as if each sentence was a question rather than a statement. Listening became maddening in very short order.

I bought a hard copy of book to get through it.

Having attended a liberal arts college during the late sixties and early seventies, I found the storyline, hilarious. The book itself is a very well written satirical look at life on an elite liberal arts university campus, today.

I'd encourage anyone who wants a glimpse at how outlandishly angry, pampered and intolerant college students have been molded today, to read this book. It is interesting, thought provoking and entertaining, all at once.

Just buy the book and READ it, rather than listening to this annoying Performance!