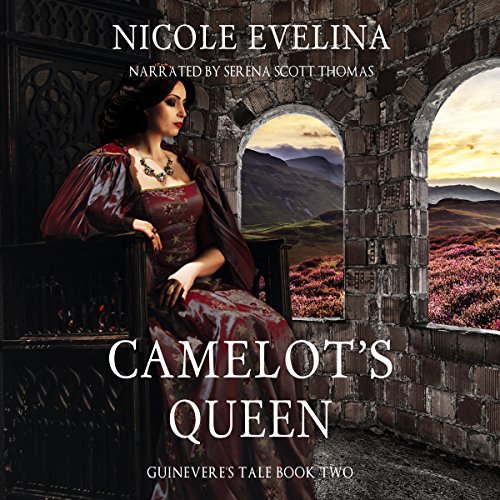 History remembers Guinevere's sin, but it was Arthur who transgressed first.

Forced into a marriage she neither anticipated nor desired, Guinevere finds herself High Queen, ruling and fighting alongside Arthur as they try to subdue the Saxons, Irish, and Picts who threaten Britain from every direction. Though her heart still longs for her lost love, Guinevere slowly grows to care for her husband as they join together to defeat their enemies.

Meanwhile, within the walls of Camelot their closest allies plot against them. One schemes to make Guinevere his own, another seeks revenge for past transgressions, while a third fixes her eyes on the throne. When the unthinkable happens and Guinevere is feared dead, Arthur installs a new woman in her place, one who will poison his affections toward her, threatening Guinevere's fragile sanity and eventually driving her into the arms of her champion.

Amid this tension a new challenge arises for the king and queen of Camelot: finding the Holy Grail, a sacred relic that promises lasting unity. But peace, as they will soon learn, can be just as dangerous as war. As the court begins to turn on itself, it becomes clear that the quest that was to be Arthur's lasting legacy may end in the burning fires of condemnation.

This highly anticipated sequel to Daughter of Destiny proves there is much more to Guinevere's story than her marriage and an affair. See the legend you think you know through her eyes and live the adventure of Camelot's golden days yourself - but prepared to suffer its downfall as well.

What listeners say about Camelot's Queen

what an amazing book. Unputdownable! As a huge Camalot fan I was really impressed. Can't wait to read the third book.

I was voluntarily provided this book via audiobook boom. The story of Camelot came alive for me through this book. It reminded me so much of the movie with Sean Connley as Arthur. I have read many stories and accounts about these characters but this one was very well done. The narrator was the perfect choice for this book. If you thought you knew the story of Camelot get prepared to have a fresh look.

I'm fairly certain I enjoyed this book even better than the first one and I believe I gave that one five out of five stars. I was really happy to have it deal in PTSD and the other difficult topics because I hadn't experienced that reading Arthurian fiction much.
A lot more sympathy for Guinevere than with other stories of her and Lancelot.

I was voluntarily provided this free review copy audiobook by the
author, narrator, or publisher.

the narration was great and it provided a new outlook on the Camelot stories..with some nice twists

This book is fantastic!

What made the experience of listening to Camelot's Queen the most enjoyable?

This is the first story I've found that tells this story/history from the perspective of Guinevere, this makes it both unique and interesting.

Which character – as performed by Serena Scott Thomas – was your favorite?

Serena makes all the characters come alive but my favorites have to be Guinevere and Lancelot.

I love the narration of this book, it's just fantastic!

Goodness yes, I'm not sure it's possible to make it through this book without at least feeling moved. There are so many different scenes that evoke emotions, I felt the whole range of emotions throughout the telling of this book.

This is the second book in the series, I recommend that you listen to the first book 'Daughter of Destiny' before you listen to this one. You can probably get away with listening to this book as a stand alone, but you'll miss out on the back story and it does help for some sections of this book.

I just loved this book, I've missed out on about 3 hours of sleep because I couldn't bear to stop listening.

The final chapter of the book covers the history that is used in creating this book and is a wonderful addition to the story.

I received this book free from ebalst, and this is my unbiased opion. the Camelot story has been retold so many time, and this book puts a few new twists to it. if you like the Author legends it is worth a listen.

The Sad Tale of Guinevere!

Yes, I would recommend this Audiobook to anyone. It is an interesting take on Guinevere's life. I would have wanted something better for Guinevere though. The Author does a great job of expressing Guinevere as a really good person that went through a terrible life.

What other book might you compare Camelot's Queen to and why?

This reminds me of Lady fortune by Anne Stuart or Daughter of the Forrest by Juliet Marillier. The life and love of a famous lady. I really wanted to go and save Guinevere myself.

Have you listened to any of Serena Scott Thomas’s other performances before? How does this one compare?

She did a great job. She really brings the listener into the story.

The utter betrayal when she was to be burned alive. That moved me. I felt for her situation. She did not deserve that.

I really enjoyed listening to this audiobook. I received this Audiobook for free from Audiobook Boom in exchange for an unbiased review.
Thank you!


There's a phrase that I will use to describe this sequel.. " Better Than The First ".

Gwen is not as she seemed in book one and there is a shocking Twist in the story line.

The Author created a Unique Twist on the Arthurian and Merlin era.

Overall, this book was a Good Read that was very difficult to put down.

Serena Scott Thomas did well with the narration.

BEST TALE ABOUT GUINEVERE BY FAR!

BOOK 2 and just as good if not better than book one. The tale continued, I couldn't put it down and when I did it was only for a moment because I couldn't think of anything else but Guinevere. Now I'm going through withdrawals and really need book 3. This book is beautifully written just like the first. I love the way Nicole Evelina's story of Guinevere! "I was voluntarily provided this free review copy audiobook by the author, narrator, or publisher."