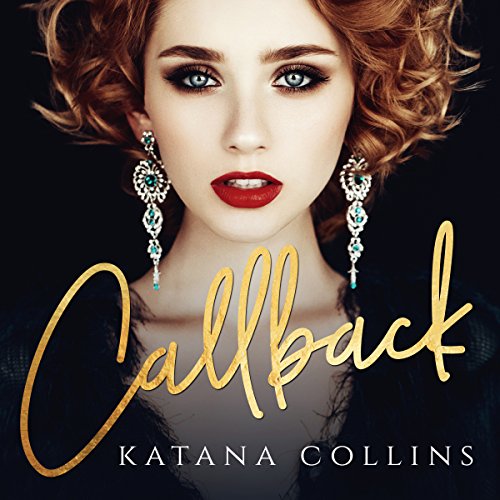 By: Katana Collins
Narrated by: Maxine Mitchell,Joe Arden
Try for £0.00

I had a reputation and he had the solution.

I thought I was done with Hollywood.
Done with acting.
Done with scandal.
Done with all the lies this industry thrives on.
Then I met him....
Jude Fisher.
A man who knows what he wants. A man who doesn’t accept no and demands more from me than I know how to give.

It started out as a way to prepare for the role of a lifetime. But as it gets closer and closer to the audition, I don’t want our scenes to end.

What listeners say about Callback

Jude Fisher has been cast as the male lead in the upcoming film, but he's been burned by his ex-wife, who used him to get more notable acting jobs. Marly does well enough in her audition to get a call back, but so does Jude's ex-wife. Marly is woefully unprepared for the role, and Jude decides to help her prepare by teaching her a bit about the lifestyle. He is actually a participant in the lifestyle, and makes himself vulnerable to Marly by sharing this information. He moves her into his 'club' for a week of exposure to the lifestyle and for lessons in trust.

The narrators do a fantastic job of bringing these two characters to life. The pacing is lively and engaging, and the conflicts for each protagonist are clear. The story may even be responsible for a bit of sleep loss...It was definitely difficult to put down. The production quality is first-rate, and there aren't extraneous noises in the background, or mouth noises as the words are spoken by each narrator.

A different kind of meet-sub...

The concept of the book leads you to believe that we’re gonna have a story about an actress who discovers Burritos Doritos Snickers and M&Ms while method acting with a superstar. Alas, there is so much more than just going to a sex club.

Here’s the thing, there’s a lot of dialogue between Jude and Marlena. It is that dialogue that is really why I enjoyed this book a lot. Sure there were some steamy parts, but to hear their conversations really added a great element. Maxine Mitchell and Joe Arden really knocked it out of the park.

I found a few of the B and C stories to be a little weak, but the main story was strong. I cheered for this couple. Very good read.

I have loved every single minute of this well written, totally engrossing, hot and fascinating story, fantastically performed by Maxine Mitchell and Joe Arden. Maxine Mitchell truly captured my complete attention with the depth and versatility of her narration. She breathed life and conviction into Marlena and each character she portrayed. Brilliant!

Great writing and something different!

I loved this story! It’s so different than anything I’m read before. The plot itself is intriguing but then the writing just pushed it up several notches. That paired with Maxine Mitchell and Joe Arden and you have a 5 star audiobook! I absolutely loved it!!!

I really enjoyed listening to both narrators. They did an amazing job. They are the perfect Marlena and Jude. I already read and reviewed the e-book bit this narration was spot on.

why I waited this long to listen to this. I dont know. So so good. and just the book I needed.
I Guess I have a new auther to look more into.

This book was so good, hot, sexy and funny. I loved it!thanks for writing something new and entertaining with sex appeal.

There's NEVER enough of the male narrators!! I wish there were more chapters with Joe Arden. Good story, but if you think you are getting Joe.....you ARE NOT. Sorry.....next book narrated SOLELY by Mr. Arden for me.

Maybe this book gets better but I can't put up with the female lead one minute longer. She wants to learn so she can portray the acting role better that she wants but she is so infuriating and not in a good way.