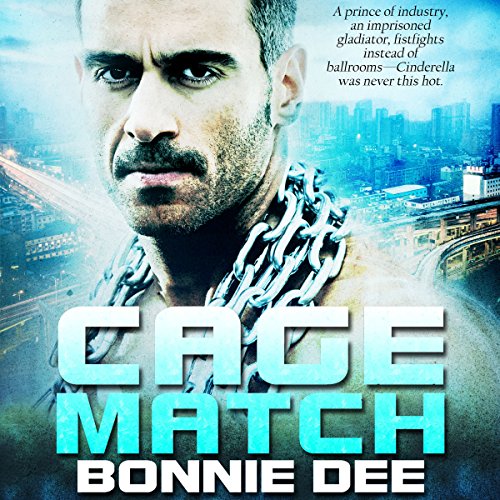 By: Bonnie Dee
Narrated by: Noah Michael Levine
Try for £0.00

A prince of industry, an imprisoned gladiator, fistfights instead of ballrooms - Cinderella was never this hot.

A master in the arena but a slave when combat is over, Jabez is a cage fighter raised on the streets. When two friends bet on a match, wealthy socialite Andreas wins time with the champion. He feels an instant sizzling connection with the battered warrior and buys out the man's contract, offering Jabez a chance for a better life.

Uneasy in sudden luxury, Jabez resists attraction to his handsome employer. The two men's struggle against desire explodes in passionate fighting, but eventually they surrender to lust, which slowly evolves into something more. When Andreas discovers his family's corporation hides dark, dangerous secrets, he faces a fight for his life. Meanwhile, Jabez learns what it means to care for someone and puts his body and soul on the line to rescue the man he's grown to love.

What listeners say about Cage Match

The best thing about this audiobook is Noah's narrating.
The story was typical. Fighter to bodyguard. Some hot sex.
A problem occurs and drama ensues. Then a HEA.
A short story. It's ok. Good filler for doing chores..
😯

Enjoyed this except that the timeline was really rushed. It would have rung more true to me if each new day we see actually happened weeks apart. But if you want a fighter with a heart of gold meets rich boy story, that is what you’ll get here. It’s relatively low angst for a book that has brutal deathmatch fights and betrayal. One knows a betrayal is coming, but it’s a doozy. Still, one expects & gets an HEA, and it even comes with a dog.

Steam: Medium. M/M sexytimes on page veer into slight domination kink toward the end but quantity is not excessive. Scenes didn’t always resonate with me emotionally, which combined with the rushed timeline is what knocked it from 5 to 4 stars.

Worldbuilding: not bad. Did not annoy me, seemed consistent & well integrated. Set in post-apocalyptic Boston, the focus is more on relatable “billionaires vs serfs” type social problems than about the fancy flying cars. But there are flying cars and better band aids, for all they aren’t the focus.

Narration: Pretty good. Accent for one main character sounds mildly Indian-American so it was easy to differentiate characters. Narrator’s dialect drops the /ng/ in “strength” & “length” and I’d never realized how many times one might use the word /lenth/ in a gay novel but every one stood out for me here. Another pet peeve is pronouncing “clamber” like “clamor” & both words were used. But this is me being picky & rude, despite otherwise quality narration.

There are many better things to listen to

The story and plot line was predictable. The ending was exactly how you'd expect it to be. I hoped for imaginative description of the futuristic setting, I was disappointed.

One of the best Books - great story

This book kept me on the edge of my seat, unfolding a twist of plots with excitement, danger and rescue.

It’s funny, I kept getting “Oh My Venus” vibes from this. They are not similar in tone at all and has a ton more gay sex in it. However, the basic beats are: ‘two people bond and learn to understand each other’s different worlds. A romantic bond that grows through exercise and physicality, where in turn they save each other from their own struggles.’

I can’t help but like this little story. The main guys were both grounded characters, whose actions and reactions made sense. It was paced well with little fat to trim in the story. I was not expecting it to be so sexual, there is a absolute ton of gay sex scenes in this, which were not poorly written.

A few of the comments talked about the world building not being as explored as it could have been. While I do agree in some places, we were given just enough to understand circumstances and and reasons for actions. This story is all about the two men’s bond and the forces that pushed them towards each other. There really is no need to add more bulk to a trim-line point.

I think that is the thing I like most about this story. It had a simple point it wanted to get across and did so. There is nothing more to it then what it provides. Good connections (and sex) between two guys trying to understand each other’s world, simple and direct.

The narrator took a second for me to get used to. I initially thought he was very robotic. However the more I listened, the more comfortable I got with his style of reading. He has that naturally gravelly voice that always works well with these sorts of stories.

Overall, a perfectly fine story that does its job and allows you to move on from it.
Oh, Did I mention this has gay sex, cause it has a ton of gay sex. You have been warned if it bothers you.

This story had good bones. Jabez is rescued from a miserable life that is spent fighting and surviving. Its all he has, all he knows. When Andreas watches one of his matches and is gifted a meeting with Jabez by one of his friends he knows that Jabez belongs with him and buys out his contract. The two quickly start developing feelings for one another and Jabez opens Andreas eyes to what the world is really like. Things do not go smoothly at all. Nothing is easy and when you have the kind of friends that Andreas has who needs enemies?

I liked both characters a lot. Andreas is a little rich and spoiled and a whole lot innocent. Once his eyes are opened to the realities of the world though he is very much a man of action. Jabez was a little harder to read but that is because of the life he has lived I think. I wish that there had been more world building in the story. Things were a bit confusing at times and the story was hard to stay interested in for long stretches. The sex was very hot though.

Noah does a great job with Narration as always. I tend to like his voices for gritty characters a bit more than rich uptight type though. I could listen to the man do that little chuckle all day though!

I had to stop listening in less than 6 minutes. The narrator sounds like a robot; it's as though it's being read by an automated voice ("you have 2 new messages"... kudos to you if you understand that reference!) And it isn't any better when he attempts to do different accents.

Unfortunately, I can't say much about the story. From reading the description (and listening to the first 5 minutes) it sounds interesting, but no way on earth could I handle listening to that narrator for hours on end. There are thousands of other books available that won't make me want to jab out my eardrums.

I enjoyed the way this story played out and I'm really glad of the HEA. The narration was good as well.

I wanted to stop reading it pretty much early on, but I thought it’s a different angle, give it a chance. It kind of grew on me, though again, not what I usually enjoy. As it was ending, I even started to think maybe not as bad as I thought...until the last chapter. So many things about that chapter that made me ask why these choices? For example, right after the comments about the dog licking the sheets they agree to name the dog after the sister????

There are SO many things I like about this book. Our heroes have infinite depth. The story isn’t just about two opposites attracting, but about two men whose mindsets slowly change over time. You can actually feel the care and concern that Andreas has as he chooses to become an active part of making his world a better place. Tons of action and interesting plot twists, sci-if futuristic without being too other-worldly, men behaving like men, and my favorite part- a refreshing absence of lovesick angst! Great narration, with fantastic accents, inflection, and character definition.