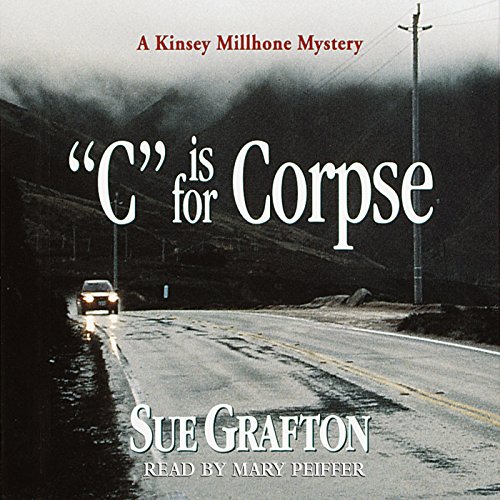 C is for Corpse

By: Sue Grafton
Narrated by: Mary Peiffer
Try for £0.00

Bobby Callahan was only 20 when an accident left him disfigured for life. The doctors patched up his body but they couldn't fix his mind.

Huge chunks of his memory were lost but he knew someone had tried to kill him and that the "accident" was deliberate. He knew he had the key to something that made him dangerous to the murderer but he didn't know what. No one believed him...so he hired Kinsey Millhone.

Three days later Bobby was dead. But Kinsey never welched on a deal. She'd been hired to stop a killing, now she'd find the killer instead.

What listeners say about C is for Corpse

excellent book. Great to listen to and onto 'D' is for. .. getting to know Kinsey Milhone

I like Sue Grafton because her books are interesting but you don't have to think too hard to follow the story. Each book stands alone, but they're better in alphabet order because the main character, Kinsey Milhone, develops over time.

I've listened to the first three books now and Mary Peiffer's narration is the one down side of the book. There are pauses in the narration for no reason and at times she sounds like the robot voice on answering machines or voice prompts when you call a company. Emotionless and precise is the best way to describe it. Luckily, the story is engaging enough to get past the narration.

What did you love best about C is for Corpse?

I really enjoyed the plot of this one. It was somewhat predictable, but still very griping I very much want to listen to the other books in this series.

I thought that the story was very fluid and believable which I find refreshing. Many of the books I listen to are not this easy to get involved in. I really wanted to know what was going to happen next.

Which character – as performed by Mary Peiffer – was your favorite?

Kinsey is hands down my favorite. She has the perfect voice to go with the character. I can't imagine a better reader for this book.

If I had the time I would have listened to it from start to finish.

This is a good read, just as I expect from Sue Grafton!

It's Sue Grafton after all!

When all is said and done(or narrated as the case may be) it's Sue Grafton, and Kinsey that keep me moving through Sue's narrated alphabet books. Certainly not the narrator. She's not terrible, but she's not that good either. Luckily I've read all the books and in my mind I already have Kinsey's voice and inflections firmly set. I feel for the listener who hasn't had the luxury and has to muddle through Mary Peiffer's flat performance and style. It makes me grit my teeth to hear her mispronounce words like bougainvillea and Camarillo - if you're from Southern California you will know what I mean. I love Kinsey and I love Sue (God rest her soul) so I'll continue to push on and tolerate Mary Pfeiffer. I know there's another narrator out there but I don't want to listen to the abridged versions. Who knows, maybe she'll improve by the time I get to L is for Liar.

Would you consider the audio edition of C is for Corpse to be better than the print version?

The easy to follow the story when doing manual tasks

Intreging, great storyline and hard to put up

What did you love best about C is for Corpse?

Kinsey tells it like it is, you can relate to her

Which character – as performed by Mary Peiffer – was your favorite?

I still enjoy Kinsey the best

Kinsey can be very forthcoming in a very interesting way

I like this series of books and the reader is good. Unabridged and it is the whole story.

Better than her later work.

I think this Grafton book is better than most of the later books. I like this narrator better too.

one of my favorite kinsey million books