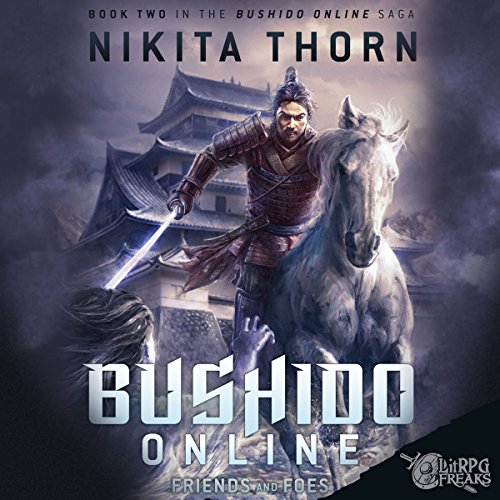 By: Nikita Thorn
Narrated by: Christian Rummel
Try for £0.00

Now a Level 10 ronin, Seiki is slowly coming to terms with the death of Master Tsujihara and his new life in Shinshioka.

Spending his days in the Wilderness, he’s venting his remaining frustrations while staying away from the city drama and those griefers, like the Rogami Clan, who had made his in-game experience so challenging thus far. He has even taken up a trade skill.

But when he’s presented with an offer he can’t refuse and accepts a simple mission to deliver a message to Kano Castle, he quickly finds his troubles are only just beginning. Caught in an imbroglio that will only get worse the more he tries to do well, Seiki will set off a series of events that will lead to chaos, death, and the eventual destruction of an entire territory.

Surrounded by betrayal, hidden agendas, and people looking to take advantage of him, who can Seiki really trust?

When everything is not what it seems, it can be impossible to differentiate between friends and foes.

What listeners say about Bushido Online

got hooked to this story, and now I want more, please do another book to this!

this story is garbage.

the mc keeps getting griefed and harrassed ingame which is the plot of the story. meanwhile he's only like level 10 and can reroll his character or create a second account whenever he wants. there isn't even an end game to this story its literally just him getting harrassed the entire book. The first one was ok so I bought this one but I wouldnt recommend this at all.

absolutely wonderful book and narrator does an excellent job keeping you engaged and wanting more!! can't wait for the next book!!!

It's really a shame how little I liked these two books, and while I could write an essay saying why, I just don't think it's worth my time.

The main issue is one of stakes. There are none. Bushido online is a gamey ass game. Uninspired save for the Japanese setting, but largely uninteresting.

The story tries to tell a tale of a young man in crisis, but nothing is ever at stake. The only thing that matters is his ability to play, and that is never at risk. When viewed through this lens, the entire story is hilariously ludicrous. It's basically like any other mmo guild drama, except it's played serious and i don't understand how anyone can enjoy it or take it seriously.

Oh no, Guild X attacked Guild Y... oh wait, it's just a game and no one lost anything.

Then the main character just inexplicably inserts himself into others' business for no reason. Any drama you try to drum up is pointless, he can literally log off, make a new character, walk v away, whatever. He has no personal stake with what happens in book 2 yet he keeps inserting himself in the plot because... reasons?

The mechanics also make for a terrible LitRPG but I won't get into that.

I was glad when it was over. I'm done with this series.

I enjoyed it. Parts were a bit over the top. You get hints at a bit of obsessiveness in the mc. There isn't much of his real-life poping through to push his growth outside the "game". This one was not as slow as the first book, just different I enjoyed it. I will be getting book 3.

A one star book could be a very dry topic, story,crude or someone preaching down to the reader. I generally don't have 1 star books. I will just return them and go my own way. My last 3 were from the same series, I had hit a very dry spot in my listening.

A 2 star story, would be something that was phoned in by a writer that typically has done much better work. I have a couple of reviews from authors that just seemed to phone it in, one most recently from an author that decided to mix current politics into his novel. If I wanted that, I would just watch the news.

A 3 star review is where I really start. It means I enjoyed the book. That I did not have a hard time following it (I have lost alot of my conversational hearing). That the story kept to a plot, the characters were not static, and the world built was plausable.

A 4 star review is something that I really enjoyed. It puts the author on my map to keep an eye out for. I go through 12-15 books a month. (audible is my primary source of entertainment. ) I will search for the author's works regularly, and seek out their stories for future purchases.

A 5 star review, These are not as rare as one would think. These are the books where the characters grow, learn, act according to their nature. Where the world is not only plausible but believable. Where there are economic systems, businesses, rules of law that make sense. Where the story is woven is progressed and told with caring and dedication. These are books, series, authors and narrators that bring it all in a package.

So, when reading my reviews, if anyone does, that is how I judge the books.

Just as great as the first book

I like how they made the mystery solvable but not obvious, and I really like the the growth of Seki as a character. Only complaint is that there isnt a third book yet but that’s just me being impatient.

Enjoyed this book from start to finish. I would absolutely recommend it to fans of the lit RPG genre!

So the good and bad. The tldr version: loved the game mechanics, some of the complexity of plot and heavy action of the book. Did not like the heavy-handed approach to plot development. Also, the narrator did a great job.

I loved the world. Well developed and kept in theme with its intrigue and shadow plots as well as a fair amount of decent people. But way more shady people (in terms of NPC’s). The combat system was well described as well and progressed with each addition of growth in a fully “game mechanic” sort of way. Meaning, the present encounter is difficult, but mainly because of his level and need to master a new skill, but as he better grasps it, the encounter becomes more manageable. Also, the MC’s friends have a lot more potential but they were kind of glossed over.

And the bad... for me, personally, there were a lot of situations that were “forced”. Everything from making the MC not be able to figure anything out even after getting force feed all previous points just so he can ask a question and the author can fully explain some point or other. Ignorance is normal, every MC is ignorant of something’s, but don’t make them ignorant just because of sloppy plot progression. Also, most of the issues the MC is in is because of sloppy-plot-progression decisions and actions forced into place. Like, the MC could have gotten away, but instead just stands there through an entire dialogue swoop then gets scared when they point him out. Forcing a story where Everyone is after one low-level toon... they are so forced it breaks the immersion. This point is one of the reasons why I’m beginning to despise PVP heavy stories.

The narrator did a great job bring everything together, really put a better spin on a decent story.

Sake is so annoying. Sake is a CRYBABY with a hero complex. Sake Just does not make any sense as a character. Now you would think that someone who likes to play captain save a hoe as much as sake would be trying to get as strong as he could. so that he can do said saving but no. He literally goes into the game just to mope around and feel sorry for himself. Oh and when he's not moping he is being played for a fool by any woman that passes by. Who in the world wants to read a book about a weak cry baby pawn. The way he acts about killing you would swear they are going to die for real. They don't even lose EXP so dying is not bad at all. You would never know that by how he acts try to save every girl in the game like its a mission. Oh and is Bushido Japaneses for Thief i hope it is Because that seem to be the only thing the players of this game care to do. Not to explore, not to beat so hard boss, not even to find new weapons well unless it's owned by someone else currently. No wonder their all at such low levels all they do in the game is scheme about how that are going to steal something from someone who only got what they have because they had to actually fight a monster on the way to stealing someone elses stuff. Every event in the book seemed forced. The writer would spend a lot of time building up a problem which was then resolved so fast I kept having to rewind to hear the two sentence solution. I wanted this book to be good but it failed.
The one part where I knew I was through with this book is when he help the woman who has played he for a fool. While she is playing him for a fool after she admits that she is playing he for a fool. To top that off she then gets impatient with him and tells him to hurry while he is going out of his way to help her knowing that when he is done she is just going to grab the prize and leave him to die. Knowing all that he still helps her. I'm sorry but I Call B.S. on that. Who would do that even in a game.

MC is just playing a game & not doing WORLD making / breaking things: it's good, but NOT a cliff hanger / WOW fest. Sad parts: a bit much, but push the MC & are a BIG reason why it's a 3 star book. Real life: VERY small & NECESSARY, to set up MC's motivations. Character interplay can be VERY dark or light & funny: these bring the mood more DOWN then up. Sex / romance: none. Story pace: constant & only slow at times. Character progression & powers are basic, & YOU or RL skills / knowledge come into play: martial artists fight better, maintenance / repair men craft / repair better, ect. This is an interesting & rare twist, in LITRPG books. Non-standard class names: it's HARD to tell what they can do / there's NO warriors, mages, archers, ect.

Didn’t expect anything like what happened. So many incredible things occurred. The whole level moniker didn’t even matter much this time. Found myself laughing often with the unexpected reveals and I could really feel for Seki-San. Starting the next one immediately.