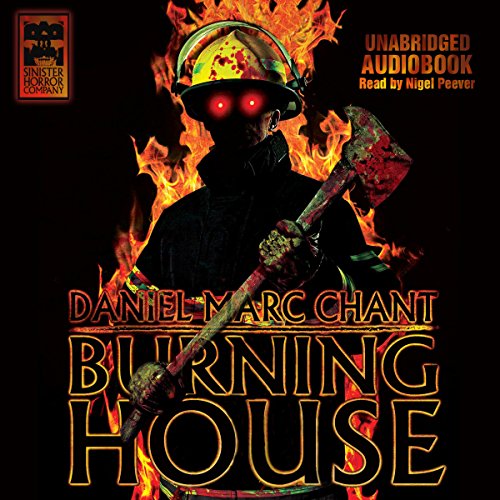 By: Daniel Marc Chant
Narrated by: Nigel Peever
Try for £0.00

They're trained to fight fires. Now they have to fight for their lives.

In a run-down part of Newstead Haven, an apartment building is burning. The fire is unlike anything anyone has ever seen. With one poor soul still trapped inside, a group of fire fighters suit up and head into the flames on a rescue mission. But they are not alone in the inferno. An ancient evil has awoken. As the walls burn around them, the crew soon find themselves trapped and prey to a shape-shifting force with a taste for slaughter. With oxygen running low and the body count rising, the team's only hope for survival is to trust each other. But who can you trust when the enemy could be anyone? A deft homage to classic slashers, with nods to the horror of H.P. Lovecraft, Burning House is a frenetic, brilliantly-paced rat-run and a true test of the listener's nerve. Take a deep breath and step inside.

What listeners say about Burning House

I'd suggest setting 3 hours and 42 minutes aside for this book because you won't want to put it down!

Disclaimer: I was provided a copy of this book free of charge in exchange for an honest review.

Fire is a scary thing. Having been trapped in a burning building as a child and having to be rescued by firefighters, I can honestly say that few things haunt my nightmares as much as seeing parts of the floor around me collapsing into the floors below and my absolute appreciation for the work those brave men and women did to save me and my partner.

It was therefore with a personal grudge that I witnessed the death of so many of these brave characters throughout this book, and yet it was done is such a brilliantly written, and fabulously portrayed manner as to still get a big thumbs up from me.

What starts as a simple fire in an apartment block quickly turns into a fight for survival as a team of firefighters find themselves trapped in the building and being hunted by an unstoppable killer, the manner of many of the deaths is both shocking and graphic which will satisfy any gore-hounds out there.

One thing I was a little disappointed by was the description of the book stating, “with nods to the horror of H.P. Lovecraft” and yet I found nothing even slight mythos-like in the tale, although this doesn’t detract from the otherwise excellent, well-contained horror tale.

Additionally, special mention is due to Nigel Peever for a stellar production with sound, music and a whole plethora of voices. It took a little while to realise the voice of little Emma in chapter 1 was Nigel! The range that he has is tremendous and I quickly stopped thinking of this as a one-man gig and was sold on all the female characters thanks to his fantastic work on the narration.

Definitely a book I would suggest to lovers of gore and suspense and, at just under 4 hours it was the perfect length and neither dragged nor overstay its welcome.

This was good! A woman is heard screaming in a fire,but no one can find her.When the firemen go back in they meet something much worse.Nigel Peever is an excellent narrator.I was given this book by the narrator,author or publisher free for an honest review.

This book has a vibe like an old time radio show such a suspense with the story going on as the narrator now rates from time to time. I loved it I thought it was great the storyline was great just think of your words beer and then have that happen in the middle of a nightmare. It doesn’t get much worse than that I recommend this to anyone who likes orange you’ll love it!

I received this book for free for a honest review. This book was well written and the storyline held together. a good suspenseful book. The narrator did an excellent job of bringing the characters to life. reccomend

Burning House is one of the most horrific books I have ever read/ heard. The book is definitely descriptive, creative and very imaginative. I would truly hate to get in this author's bad side. The storyline is strong and stays in point. The narration of Nigel Peever is phenomenal with a capital P. I love the voice he does for the little girl. I highly recommend this book if you like twisted supernatural thrillers with intrigue. I received this audio book at my request. I am leaving my honest review of my own volition.

The writing and narration are both equally excellent in this creepy tale. I'm sure you'll enjoy it immensely.