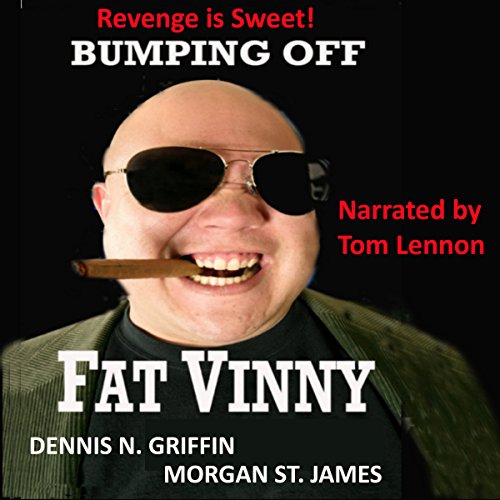 Bumping Off Fat Vinny is a lighthearted look at the attempts of authors Margaret Stanton, Danny Garrett, and Maria Mancuso make to do away with a scoundrel who seemingly has more lives than a cat. It confirms the old adage that the best laid plans of mice and men sometimes do, in fact, go astray.

The authors were contracted to write the true story of Maria Mancuso, widow of murdered Mob boss Tony "The Nose"; they knew they had produced the ultimate true crime story - one that would receive an avalanche of literary awards and mountains of praise from their publisher, Fat Vinny Vitali. In fact their agent had already pitched the story to a movie studio, and a contract was pending. How could it get any better?

Then the bad news. Fat Vinny refused to accept the manuscript as written, instead demanding the authors actually solve the murder of Tony "The Nose". He threatened to hold the project in limbo until they gave into his demands. After several tense meetings with Fat Vinny and consultation with an attorney, the authors realized the only way out of their publishing contract was if Fat Vinny died. The more obnoxious he became in his demands, the more convinced they were they might have to help Vinny's untimely demise.

The fun begins when the three writers become murder conspirators in what they believe will be a foolproof effort to save their book and the movie deal.

What listeners say about Bumping Off Fat Vinny: Revenge Is Sweet

The mob, a hit, a widow, a true crime memoir, a publisher, a falling out and some drastic measures taken.

Not the best book I've ever read, but one I did find amusing. Two co-writers and their client, a mob widow try to bump off Fat Vinny after an insurmountable disagreement finds him standing in the way of riches in the form of a film deal, for the book they've written but which he won't agree to publish or relinquish the rights to.

I quite liked the frustrated attempts to hasten Vinny's departure to the afterlife, and it wasn't like he didn't deserve it. That said, further down the road, Vinny does something out of character which has me slightly reassessing his douche bag credentials.

There's a slight suspension of disbelief required to stay on-board with the scheming. At one time, one plan involves the assistance of two individuals Danny crossed paths with during his time in law enforcement. The next plan involves interviewing three hitmen for the job, and during subsequent discussions the conspirators worry about keeping their plans on the down low and maintaining secrecy. Duh... you've involved outsiders and now you're worried about exposure.

I liked the three main conspirators though and the way they backed each other and got along. I quite liked the idea of Danny and the glamourous widow, Maria getting together, but that never transpired. I liked the mounting frustration as the efforts to outsmart Vinny failed, before the pursuit of a more permanent resolution.

There's a decent clip to the prose and a not entirely unpredictable twist near the end of the book. You could kind of see it coming from quite early on. There's a second twist which wasn't exactly telegraphed but wasn't a shocker either. In my view the book would have been better either ending after the first non-shocking shock, or with another alternative outcome.

More to like than dislike and I wouldn't be averse to checking out anything else the co-authors may write either singly or collaboratively in the future.

OK, so the plot is barely above a Stooges movie sometimes, but the dialogue is good, the characters, especially Vinny, have real personalities and there are more than enough laughs for the money. The big surprise ending is icing on the cake.

Fun to listen to, great ending

If you could sum up Bumping Off Fat Vinny: Revenge Is Sweet in three words, what would they be?

Would you recommend Bumping Off Fat Vinny: Revenge Is Sweet to your friends? Why or why not?

Probably not too strongly. I almost returned it, but the ending made it all worth while.

What does Tom Lennon bring to the story that you wouldn’t experience if you just read the book?

Without his narration I don't think the book would hold much interest for me. The plot is weak and only his characters bring out what little humor there really is. He actually made me like the bad guy more than the good guys.

Well, yes. It is a pleasant harmless way to spend some time. No suspense, but an easy book to listen to.

There are a few laughs here and the twist at the end is really a good one, but the basic plot of the book is not very believable.

Good funny story, entertaining with good characters, Tom Lennon does a fine job of narrating. I received this audiobook for free in a promo, and am voluntarily writing this.