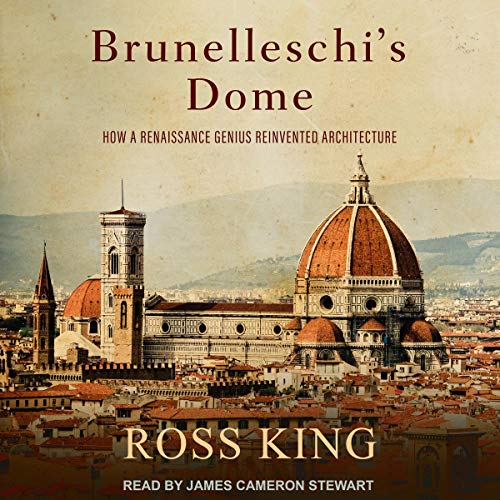 By: Ross King
Narrated by: James Cameron Stewart
Try for £0.00

On August 19, 1418, a competition concerning Florence's magnificent new cathedral, Santa Maria del Fiore was announced: "Whoever desires to make any model or design for the vaulting of the main Dome...shall do so before the end of the month of September." The proposed dome was regarded far and wide as all but impossible to build. The dome would literally need to be erected over thin air.

Of the many plans submitted, one stood out. It was offered not by a master mason or carpenter, but by a goldsmith and clockmaker named Filippo Brunelleschi, who would dedicate the next 28 years to solving the puzzles of the dome's construction. In the process, he did nothing less than reinvent the field of architecture.

Brunelleschi's Dome is the story of how a Renaissance genius bent men, materials, and the very forces of nature to build an architectural wonder we continue to marvel at today. Denounced at first as a madman, Brunelleschi was celebrated at the end as a genius. He engineered the perfect placement of brick and stone, built ingenious hoists and cranes to carry an estimated 70 million pounds hundreds of feet into the air, and designed the workers' platforms and routines so carefully that only one man died during the decades of construction.

What listeners say about Brunelleschi's Dome

I know this book well. Studied it, studied the subject matter, read the book several times. Thought I'd use a credit in buying the audible version so I could enjoy the book whilst driving. Truly wish I hadn't bothered. Whilst I don't doubt Ross King's work - I've seen him lecture, have read his other books about Leonardo, The Last Supper; all of his work in this particular book was completely spoiled by the narrator. It was like listening to a computerised version of someone reading out the words. Disjointed, badly emphasised in the wrong places, dull, uninteresting. I mean like SERIOUSLY. This is a lesson in how to read a book badly. I'm sorry for Ross King that his brilliant work has been butchered.

Architect during the Italian Renaissance

This is a terrific book that recounts the backstory behind the construction of the dome of Santa Maria del Fiore in Florence, Italy, by Fillipo Brunelleschi. The dome still remains the largest dome in the world without any flying buttresses or center support. A history of the construction and all the internal problems is well-covered.

This book is a little confusing to follow because the author is not always clear about who he is talking about. He also uses key architectural terms but never explains their meaning making the average listener confused. The narrator is not my favorite- no emotion and the way he reads reminds me of a robot. Just my preference.
Again, I do appreciate that the writing is based on facts and research.

The author spends a lot of time on the actual mechanics of building the dome and the machinery created/used by Brunelleschi. It gives you an amazing perspective of how brilliant and ahead of his time Filipo was. The narrator has the potential to be great, but he adds these weird inflections that are really unnecessary. He’s kind of hard to swallow sometimes, but not to a point where you can’t listen. I’d give him a 3.5 rating, if that was an option. Overall, worth the listen.

This was both entertaining and educational. I highly recommend this book to anyone fascinated by genius and creativity and for Italophiles.