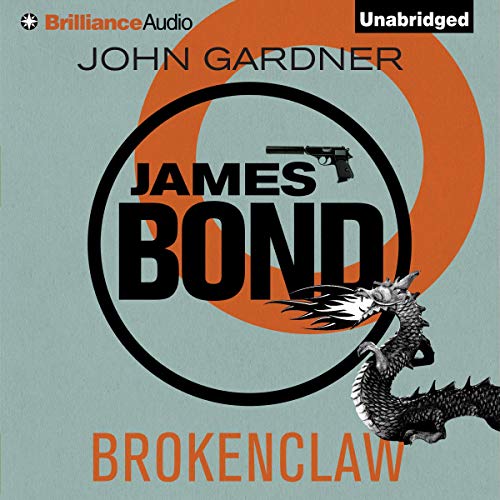 On holiday in Victoria, British Columbia, Bond becomes by intrigued Lee Fu-Chu, a half-Blackfoot, half-Chinese philanthropist who is known as "Brokenclaw" because of a deformed hand.

On his return to the UK Bond is tasked to investigate the kidnapping of several scientists who have been working on a new submarine detection system. It becomes clear that Brokenclaw is behind the kidnapping and worse, he has a devastating plan to cause economic meltdown through the collapse of the dollar.

Bond has no choice but to enter his lair....

What listeners say about Brokenclaw

Too much chat little action.

One of Gardiner's poorer bond novels. I think Gardiner hoped that at least one of his bond books would get picked up as a film script. Brokenclaw is a cod Dr. No and rambles along from Briefing to Briefing with M playing a central role. Gardiner depicts M as a crumbly old Bank Manager and it never convinces. The book is a slow read and only gets going in the second half of the novel. That's five hours of chat in this audio book. Gardiner is at his best when describing kit or weapons but hopeless with his female characters. Women in a Gardiner Bond novel are cardboard stereotypes and all could be called Babe #1 followed by Babe #2 etc. Gardiner deserves credit for taking James Bond in a different direction from Ian Fleming but most of his Bond cannon reads and listens like a 'B' movie script. Brokenclaw is for the truly fanatical Bond fan who wants to collect all the written material there is. A as casual thriller it's mediocre.

An interesting premise for a Bond novel, and some truly well written scenes. The final / third act though... Definitely not what I would call a Bond novel. Simon Vance gives an amazing performance, as always.

Ok but not great

Brilliant book and keeps you hooked right to the end. Better than watching a film.

I bought this novel because the geographic locations in the story were of personal interest to me. Unfortunately, Gardner did not live up to the travelogue standards of Ian Fleming. In this book, we have an alternate-universe continuation tale where a WW2 veteran, James Bond, seems to be three decades younger than he should be (I think this is set in 1989), and his WW1 officer boss, "M," who should be about one-hundred years old, is now also a globetrotter, flying around the world to act as James Bond's onsite supervisor, bail bondsman, and annoying old uncle. However, true to life, Simon Vance/Robert Whitfield, the narrator, does sound older than in the original audio books he narrated decades ago. (Sorry, Amazon, but I'm not quite convinced that "audio book" is one word, although you have single-handedly changed the English language to make it so, through sheer dominance.) One of the most irritating aspects of this book is Vance's heavy-handed thick Chinese accents for second and third generation Chinese people born and raised in America. People usually have little to no foreign accent under these conditions. Chinese people fresh off the plane do not have the stilted accents that an American born naval officer has in his narration. This adds to the overall "corniness" of a pretty silly book. (I saw an interview online where Vance describes Ian Fleming's writing as racist and misogynistic, and therefore offensive. In the oppressive atmosphere of 2019, perhaps people should save digital copies of these novels before the paper versions are burned, along with the hardcopy owners of these.) The titular villain is a combination of Fleming's Mr. Big from "Live and Let Die," and Dr. No. The similarities are too numerous to list here, and that is particularly true of Dr. No. Do not, under any circumstance, read or listen to "Dr. No" immediately before listening to this audio book. I have been subjecting my wife to the Fleming audio books, and by accident this is what I did. This makes Brokenclaw's obvious clone-job particularly nauseating. This book has even less action than "Casino Royale," the novel. There was a small amount of action in the beginning, then Bond sits aboard a USN ship for about eight or nine chapters, doing absolutely nothing other than engaging with the overblown dialogs of superfluous characters. For the bulk of this book, nothing happens. During Bond's stay on the ship, a Bond-less side story takes place, but not much happens in that, either. When things finally pick up again for the final few chapters, weird and illogical things take place. This book was one of the weakest action novels I've ever read. I don't always consume fiction for its face value, but I do hope for better than this, even when my interest isn't obvious. I have only read (or listened to) a few non-Fleming Bond books. Having read all of the Fleming 007 novels in the 5th and 6th grades (the first time; in the mid-nineteen seventies), I would say one redeeming facet of this paperback novel was that it did not dwell on sexual descriptions of Bond's carefree amoral behavior. Fleming's creepy attempts at eroticism were extraordinarily cringeworthy. However, in "Brokenclaw," there was a bizarre moment when the villain thoroughly rubbed Bond's "loins" with grease so that pet wolves would devour his genitals. No, I am not making this up. I'm not sure what part of the author's psychology projected this onto paper, nor why this passed an editor's "smell test," but this would get my vote as the strangest episode in 007 history, if I counted this displeasing book as cannon, which I certainly do not. I cannot recommend this book. The only other redeeming facets of this story is that James Bond has significantly curbed his alcoholism (I imagine his aged and highly abused liver can't handle more than a few sips of the product placed Californian vino) and he has quit smoking (tobacco). Good for you, Mr. Bond! Oh, and he has also inexplicably given up coffee for tea (again, I suspect his elderly digestive system has revolted), despite his office outburst about tea vs. coffee in an original Fleming novel. Perhaps it was even herbal tea. An elderly gentleman stretching himself to the limits of human physical function must make occasional concessions, even if it he is the notorious, I mean legendary, James Bond.

What did you love best about Brokenclaw?

Simon Vance's crisp, smart, and enthusiastic reading helped put this one over the top.

If you’ve listened to books by John Gardner before, how does this one compare?

Gardner's Bond stories are always worth the trip, though "Brokenclaw" I found to be only a little bit better than "okay", storywise.

Have you listened to any of Simon Vance’s other performances before? How does this one compare?

I've listened to many of Mr. Vance's performances before, most notably his readings of Ian Fleming's and John Gardner's Bond novels. He does his usual polished job here.

No, this was an okay Bond story, but I was fine listening to it over the course of about a week in my car. Other Bond stories by Gardner I listened to faster to see how they would turn out.

This one was mainly enjoyable due to the reliably entertaining Simon Vance performance. The story was engaging, but not much more than that.