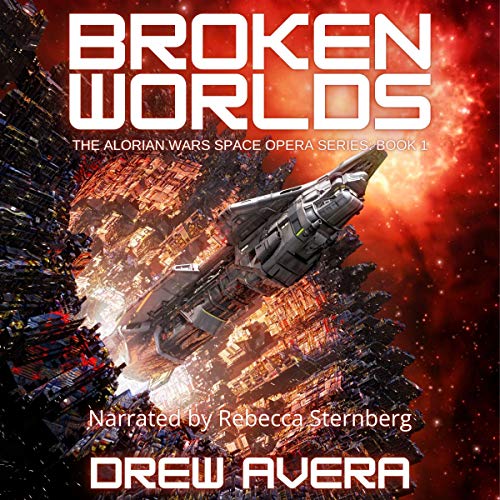 The Greshian Empire has reached across the Alorian Galaxy, using its naval might to bring its enemies to their knees. Dead planets float in their wake as the empire fights to assert themselves as the supreme race. Ensign Brendle Quinn has spent five years loyally serving the Greshian Empire in their relentless quest to dominate the Alorian Galaxy. But as his ship decimates planet after planet, he finds his sympathies swinging towards their defeated enemies.

Sergeant Anki Paro, a Luthian Marine, has been anxiously awaiting the call to deploy. As the last line of defense against the crushing Greshian forces, she hopes the time has finally come where her world can stand against tyranny and protect the rest of the worlds in her sector of the Alorian Galaxy. As her path towards war draws near, Anki begins to notice a shift in balance as her society prepares itself for imminent destruction. Questions of misplaced loyalties lead her to wonder if the world she is trying to save has any real intentions of surviving. As Brendle and Anki's worlds collide, they find themselves in an unlikely alliance to try to stop the full might of the Greshian Empire before there's nothing left to fight for.

What listeners say about Broken Worlds

I found the story very difficult to get into. It took until about chapter 10 for me to settle into it. Quite frankly it was not to my taste though it did vastly improve during the last third of the story which I did enjoy. That is not to say other readers might really enjoy it. I think they probably will if they are more in tune with this sort of story.

Quite good but didn't catch my imagination all the way through that i thought it would.
Characters are quite appealing but i feel that there is something missing in the overall story or that perhaps we just haven't got there yet.
Narrator is quite good although i must admit i do usually prefer a male voice.
Overall the story is quite well written and works well if you like more of a story without lots of space battles. For me it didnt click but know that these stories can work quite well for a lot of people.

This book was provided to me in exchange for an honest review and as such is my own opinion.

not my cup of tea

I just could not get past the first chapter. the story started too slow for me and the narration just killed it - for me.
Liking or disliking a narrator's voice, tone and delivery is subjective and I will only say that this one is just not to my liking. What is objectively Tru though is that the audio quality is pretty bad which is probably half of the reason I don't like the book. with so many great books out there there is just no reason to listen to one that I find painful to listen to.

When Anki, a Luthian Marine, and Brindle, a Greshian Ensign, worlds collide things in their worlds become very confusing from what they have grown up being told.  But can they change things and   will they save their people?
This is a wonderful military science fiction book/audio.  This is a highly entertaining book, I had the audio version with voice actor Rebecca Sternberg, who does a awesome job bringing this world alive for the listener and making you feel as though you are there and part of the crew family.  I really enjoyed this as a audio and can not wait for more.

This book had a slow start, but I enjoyed it overall. Reminiscent of Star Wars and numerous other sci-fi stories, it was an enjoyable read. The author is a good writer and his world-building and descriptions were very good.

The narrator spoke way too slowly for me, so I sped up my Kindle to 1.25x and enjoyed it much more. Since the book was written from 2 alternating perspectives, I think that the narration would have benefited from having two different people also.

I was given the opportunity to listen to this book through the author's newsletter and chose to review it.

A grand adventure on the high seas of space

Right from the beginning of the book, I was reminded of the high seas adventures books that I used to read with sailors sailing the seven seas, pirates and deserted islands. This book gave me the same feeling except the setting was in space. I love that feeling and it makes it easy to get lost in a book like this. it is a great start of a new series that I definitely want to keep reading to find out what happens to the characters. You become very invested and what is going to take place next.

I really enjoyed this book. The narration was excellent. Great military Sci-fi. I would have preferred alternating male and female narrators where appropriate though. The reaction between the characters is realistic. Thoroughly enjoyable.

A little bit of everything you want to read about in a space opera. A good read. I received this audiobook for free and voluntarily reviewed.

I haven't read space opera in a while, but received a free code from the author, so I figured I'd give this one a whirl.

I really liked the characters of Anki and Brendel. They were believable and I hope to read more about them. I did feel the story was a trifle short, that things, especially at the end, progressed too quickly. But I was overall satisfied with the story.

The narrator's presentation did underwhelm me, and at times, got in the way of my enjoyment of the story. Her way of speaking seemed somewhat forced and overly clipped and precise. Perhaps this was intentional due to the genre, and I'm more an urban fantasy reader and used to a more relaxed presentation in my audiobooks. 4 stars for story, 3 for performance, overall 3.5 stars.

Interesting story, glad to have heard it. Imagine a Disney movie in an original space opera setting. If that appeals, you would probably enjoy the book or audio version. I did. Story is complete. It does not end with a cliff hanger.
Reader does good job of projecting character's emotions, and reads very well. On the down side, and these are minor points, her voice does not change very much when conversing as either main character. One technical issue, you can sometimes hear reader's breathing between lines, which is mildly distracting.

Broken Worlds (The Alorian Wars #1) by Drew Avera was a free audio I won by responding to the author's newsletter on time. The first 20-25% was a bit slow but then it picked up. I liked the premise and the characters, the plot was good and it sounds like it might me a good series. The narrator spoke way too slow so I just upped the speed and it worked out perfect, so that wasn't a problem. Overall, it was an okay read considering the slow beginning and all. I am not going to give up on this author because I see great stories that can be had. I bought some stories and plan to give them a try. If it wasn't for the slow start I would have given this a star higher.

What other book might you compare Broken Worlds to and why?

speaks too slow, I had to speed it up

Did Broken Worlds inspire you to do anything?

I did buy more of his books, although this one was a 3 star book, I could see big potential