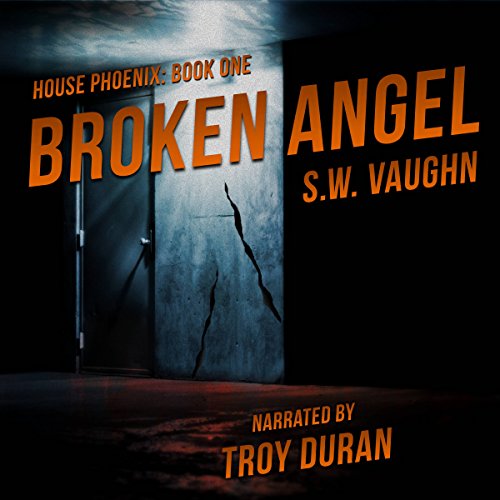 One man. Extraordinary odds. In this brutal underground world, there's only one rule...

Gabriel Morgan just wants to find his missing sister. All he has is his determination, and the knowledge that she's somewhere in New York City and may be involved with an underground street fighting ring known simply as the Organization.

Marcus Slade, one of the Organization's leaders, wants money - and the young, strong, hot-tempered Gabriel looks like a sure bet. To ensure cooperation, Slade kidnaps the girl, then grabs Gabriel from the streets and gives him a choice: Fight, or watch his sister die.

Gabriel knows he doesn't have a chance on the inside. But he won't let them hurt Lillith, so for now he'll play their game. In a world where he can't afford to trust anyone, he's about to learn that nothing is what it seems -- and his only hope for survival might lie with the one man who's most determined to break him.

What listeners say about Broken Angel

-groans- Why Can't I find more stories like this?!

I LOVE LOVE LOVE this brutal knock-em up then knock-em down, in your bloody and bruised faced underdog for the good tale. I read this stories a couple years ago. I enjoyed sharing those horrid's moments with Gabriel and just fell head over heels in love with him and the few who became his family.

This story is brutal and effing perfect! No stupid romance, just a fantastic plot of a broken Angel who finally beats the sh*t out of anyone who stepped in his way of becoming the dominate alpha he was always meant to be.

And, though I felt Troy Duran's voice was bit too old for Gabriel, it was absolutely pleasant to listen to his performance. Plus, he did a fine job of it.

I'm so desperate for the next books to come out. Hope they keep the same narrator!

I would definitely recommend this book to someone is a fan of noir thrillers such as those by Dashiell Hammett or Mickey Spillane. The action is intense and the story was very well written.

Troy Duran's narration was very engaging but not over the top. He brought depth to the characters & played to their strengths. Sometimes I wasn't sure if it was the same narrator! Accents were done tastefully & were not exaggerated or caricatured.

If you could sum up Broken Angel in three words, what would they be?

Jenner. He was really hard to like, but you kind of can't help it :)

Have you listened to any of Troy Duran’s other performances before? How does this one compare?

This is the first book I've heard by Troy Duran. He seems to give everything to this roles, and I like listening to the different voices he creates for the huge range of characters in the book.

Yes. And I could have, but alas, work and sleep had votes too!

Really good writers can make you feel like you're right there in the middle of the story, and Broken Angel definitely fit the bill. I'm anxious to read the next books in the House Phoenix series, and especially hear them, if Duran is the narrator ;) DEFINITELY worth a credit!

Wow! Not your average mystery!💜

This book was well written and riveting. I couldn’t put it down. This story was loaded with heart pounding moments, angst and despair, and at times I found myself holding my breath. The characters were fantastic, especially creepy Jenner who gave me chills. This book is an emotional roller coaster ride, complete with some twists and turns you may not see coming. The narration by Troy Duran was amazing. There were so many different characters as well as the emotions and personalities of each one, yet he performed their voices brilliantly.
IMO this book was very angsty and I loved every minute of it.
I highly recommend this book.

Gabriel
Wow, just Wow! I had no idea what I was getting into with this story. This is a great story with a lot of angst. A lost girl and a brother on the search until he gets caught himself. He must fight to save his sister. He has to be trained however and the training process is very grueling and painful. He has no choice but to keep on and to not lose any fights. I highly recommend this book and I absolutely loved the amazing narration.
Sisters Spotlight 💕

If you aren’t into MMA or similar fighting styles

First thoughts about the cover of Broken Angel? Well, that’s a bit scary. The wall looks cracked, the door looks like it is in shadow. Is it a basement? Is it a dungeon? Is that blood on the floor?! It had my brain asking several questions before I ever started the book. Good way to draw the reader/listener in.

This story is about Gabriel Morgan. He’s trying to find his sister. He feels he is responsible for her, he must take care of her, save her. In doing so, he unwillingly ends up getting tied in with underground fighting. He fights to protect his sister.

The main ‘bad guy’ for most of this book is Slade. Honestly, this guy is an A-Hole to the max. Cruel, angry, narcissistic, manipulative… He sure makes a great bad guy for sure! I wanted to punch.

Troy Duran is the narrator for this story. I loved his voice. Troy Duran has a sort of throaty growl in his voice that I found lovely. I loved the accents he gave to some of the characters in the book. This book is 9 hours, 1 minute, and 40 seconds. Well worth the time.

There are several descriptive bloody fight scenes. Kinda mixes boxing, mixed martial arts, free style, and flat out brawling. If you aren’t into MMA or similar fighting styles, this book is not for you. It has a great story line about the five houses that run the fighting ring as well.

The one mistake the narrator made that I caught was at the end of chapter six. It was a small one word oopsie, but it still brought me out of the story. The word bow. He read it as bow as in bow and arrow. It should have been said as one would bow a head. As in bend forward or curve downward. Same spelling, but different. Over all I greatly enjoyed this story and am looking forward to the others in this series. They are on my list for sure.

When I finished this book it left me with the feeling that sometimes people are not what they seem. Even the best person has their dark side. There will always be people in your life that you think you cannot live without, but you might have to cut ties and walk away. Sometimes letting go is the only way to move forward.