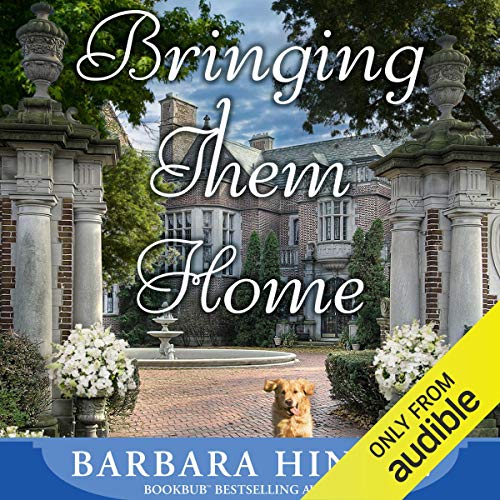 By: Barbara Hinske
Narrated by: Dina Pearlman
Try for £0.00

The state’s case against Chuck Delgado is foundering as things heat up and turn deadly in Westbury. Frank Haynes and Loretta Nash each possess the proof to put Delgado away for good, but coming forward could destroy their relationship. Will they put self-interest aside to do the right thing?

Susan Martin begins her new life as Mrs. Aaron Scanlon, only to find that more changes are on the horizon, and David Wheeler uncovers secrets about his friend’s and his father’s pasts that turn his world upside down.

As Maggie Martin rediscovers an old love, will she be able to overcome her past and venture into the life she truly desires?

Return to best-selling author Barbara Hinske’s world of Rosemont as the people of Westbury seek their happy ending.

Interview with the author

Q: Have you always wanted to be a writer?
A: I'm an attorney and have done a lot of technical writing, but knew I wanted to write novels. I thought I'd find time when I retired. Fate stepped in, as it often does, and put me on this path sooner. I broke my neck in an auto accident and suffered from double vision for months. I couldn't read or watch TV, so I conceived the plot for my Rosemont series.

Q: Why did you decide to write a series?
A: I prefer television series to movies. The longer format of television allows for deeper character development. The same holds true for series fiction. I like to fall in love with a character or hate a character (but root for them to change their ways). I feel like Mma. Ramotswe and Mma. Makutsi from Alexander McCall Smith's Ladies' Detective Agency series are old friends. I wanted to recreate that sort of connection in the Rosemont series.

Q: What other authors do you read or admire?
A: I'm a fan of women's fiction, women's sagas, and romance. I love Rosamunde Pilcher's later trilogy - The Shell Seekers, Coming Home, and September. Jan Karon's Mitford series creates an enchanting world, as does Debbie Macomber's Cedar Cove. My Rosemont series is set in the current day, but I've tried to capture a feeling of camaraderie and connection (among the good guys) that takes us back to a slightly simpler time and place.

Q: What are your favorite books?
A: In addition to the works I've already mentioned, I adored Major Pettigrew's Last Stand, The Guernsey Literary and Potato Peel Pie Society, and A Long Way from Chicago.

Q: Who has had the greatest influence on your author life?
A: My dad - without question. He told me or read me a bedtime story every night of my childhood, often adding his own twists and turns to the plots or dialogue. He had an incredible, gentle sense of humor. He also wrote novels - who-done-its - when he retired. I have 17 of his manuscripts and can feel his comforting presence in the room with me when I pick up his pages and read.

Q: What of your own interests have you written about in the Rosemont series?
A: I love my home and all things related to homemaking: cooking, gardening, decorating, and entertaining. I love celebrating all of the seasons and I change my decor for Easter, Fourth of July, fall, Halloween, Thanksgiving, Christmas, and spring. I'm also addicted to vintage silver and all sorts of china, with a special fondness for teapots.

What listeners say about Bringing Them Home

I have enjoyed this series so much! So well written and narrated. I love what Maggie has accomplished throughout this. I am only disappointed that the next two books in the series are not on audible yet!

just when you think...

Wow, The story keeps getting better. Definetly a page turner. love the characters and storyline. Absolutely draws you in. Book 5 here... keep them coming. absolutely attached to the characters.

I love the series also. I listen to books from audible each night when I go to bed. I can’t imagine have to read a book for the next 2 in this series. When I read holding a book I doze off and it hits me in the face. After that I’m wide awake. Hopefully the woman reading this series will be hired soon to read the next books. Even if you have to change readers it will still be good to have them in audible. I can say I truly enjoy audible. I listen when I clean my kitchen & other rooms. I put my phone against my ear turned while I’m at therapy while I get moist heat on my leg. I very happy there is such a thing as audible!!! I’ve never read so many books as fast. In the day I used to order books from DoubleDay Book Club. I read a lot every night but this is so much easier. I just set the sleep timer and relax.

I really enjoyed this series. But the end of the first book I was skeptical, but by the end of the last book, I was so glad I’d stayed committed to the story line. The series was very entertaining!

I really enjoyed this series the plot and character development were excellent even the redemption of the bad guy was believable. The narrator was also very good. The audio quality was not as good as I expect from Audible, there was a tin can quality to the recording. I still enjoyed the series very much even with the sound issue.

I really enjoyed this series. Would like to read more of this type of series.

I loved the storyline and all the characters and how they all fit together. The love and redemption made for a perfect story with enough twists to not making the conclusion obvious. Great performance by the reader.

and everyone lived happily ever after

Hinske provided an enjoyable finish, wrapping up loose ends, filling in blanks, with this 4th book in the Tisemont series.