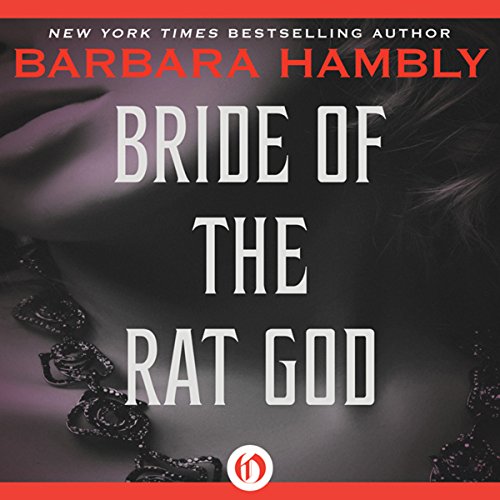 Bride of the Rat God

Bride of the Rat God

After donning a cursed necklace for the cameras, a silent screen starlet and her entourage are terrorized by an ancient demon.

It is 1923, and silent film reigns in Hollywood. Of all the starlets, none is more beloved than Chrysanda Flamande, a diva as brilliant as she is difficult to manage. Handling her falls to Norah, widow of Chrysanda’s dead brother. She has always done her job well, but she was never equipped to deal with murder.

When a violent killing shocks Chrysanda’s entourage, and other weird happenings swiftly follow, Norah begins to suspect that some strange power is stalking the star. In Chinatown she receives warning that a curse has been placed on the actress as vengeance for wearing a sacred amulet in one of her films - and this curse could mean death for all who surround her.

I love all of Barbara Hambly's books, but I have to admit to an extra soft spot for this stand-alone. Mixing ancient Chinese magic with 1920s Hollywood, a kind and brave English war widow who becomes a companion to her Hollywood vamp movie star sister in law, some Pekingese dogs and too many more details to mention here, Bride of the Rat God is funny, clever and an entertaining read for people who like fantasy or for those who don't normally read it.
The main characters are all really engaging, the system of magic is interesting and most importantly, (as with all her other books, mystery,fantasy, whatever) Hambly's writing is very detail-oriented and her fascination with the early history of Hollywood, silent films and the time and places she writes about shine through. The book is filled with historical research inserted so seamlessly into the story that it adds verisimilitude and charm to every section.

The narration and accents were very well done and did not disappoint for a book which I had read many times. This is a fun trip through old Hollywood, Chinatown with some magic and honestly scary bits along the way as well. I recommend it highly!

This is a wonderful story that calls to mind the stories of Agatha Christie for period and tone, mixing in restrained romance and a fantastical plot of Oriental demon gods, wizards in hiding, and the over the top world of movie studios between the world wars. Ms. Hambley crafts her tales with the greatest skill.

Would you consider the audio edition of Bride of the Rat God to be better than the print version?

I can't compare, as I have not read the print version.

Hmm. Nora, I suppose. She was an interesting blend of vulnerability/strength, skepticism/openness.

The narrator was excellent.

An excellent recording of a favorite book

This is one of my favorites, and it was a great experience for me to listen to as I worked. Highly recommend!