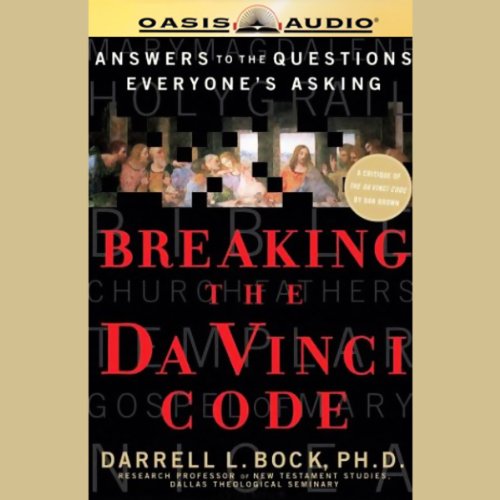 Many who have read the New York Times best seller The Da Vinci Code have questions that arise from seven codes, expressed or implied, in Dan Brown's book. In Breaking the Da Vinci Code, Darrell Bock, Ph.D., responds to the novelist's claims using central ancient texts and answers the following questions:

Darrell Bock's research uncovers the origins of these codes by focusing on the 325 years immediately following the birth of Christ, for the claims of The Da Vinci Code rise or fall on the basis of things emerging from this period. Breaking the Da Vinci Code distinguishes fictitious entertainment from historical elements of the Christian faith. For by seeing these differences, one can break the da Vinci code. Ultimately, though, there is another code lurking behind the pages of this novel. Most readers of the novel have no idea that this other code is there. In fact, Bock didn't notice it at first himself. Breaking the Da Vinci Code, though, will lead readers to discover why this novel has become something of a public phenomenon and why the issues it raises are worthy of careful study and reflection.

What listeners say about Breaking the Da Vinci Code

A poor attempt to disprove the Da Vinci Code

The Da Vinci Code is a good work of fiction. Like most works of fiction it is based on some part truths and the rest is made up.This author seems to think that it is all part of a great plot to take people away from Christianity (not that the church needs much help in that today). And he takes much of the book to build up to that - it is fairly easy to see the way the book is heading from early on. The last chapter is the advertisment for Christianity and has nothing whatsoever to do with the Da Vinci Code.
The arguments deployed are weak and could just as easily be argued the other way to prove the theory. If this is the best that the church can come up with to disprove the Da Vinci Code there must be more to the Code that I thought. I started listening to the book with an open mind, suspecting that there would be some elements of truth in Brown's book and much made up. I am now left thinking that I want to read more to learn more about the Code; but not by this author.
Not a book I would recommend!

some of the comments for this book basicly called the author a Roman Catholic and another said the facts were not as well researched as Dan Brown's. Darrell Bock teaches at Dallas Theological Seminary and is not a Roman Catholic. And the idea that Dan Brown did a better job with his research is truly funny. Dr. Bock has been teaching on these subjects for decades to masters and PhD students, he is a luke scholar and has written critical scholarly commentaries on the books of Luke and Acts! Bock's credentials are all there, scholarly books, articles, president of the Evangelical Theological Society, and the list could keep going on and on. I say all that to say Dr. Bock is an amazing teacher, speaker, and writer he is honest in his work, actually studying the documents like the Bible, the gospel of mary, Thomas, ect. an early Christian theology attest to this. If you are intrested in these topics then get this book, finding Dr. Bock's work is like winning the lottery because of his honesty an teaching abilities. He has stuff on YouTube, articles you can read online from scholarly journals on these topics, podcasts, ect. Conservative Orthodox Christian scholars are in the minority by far it's a intresting perspective to hear and is backed by reality and history. Textual criticism, and archeology attest to this. (i.e. new testament manuscripts, early church father writings, gnostic gospels) hope this helps with your decision, mostly was offended by the untrue an slanderous comments i refereed too above which is why I wrote this "review". -Jacob Dallas,TX

Interesting but not simple.

After finishing the Da Vinci Code, I was filled with curiosity about the many issues raised regarding the Catholic church, Jesus, etc. This is obviously in defense of what is written in the bible not a critical look at other theories surrounding the existing or, supposed missing gospels. It is interesting but having poor working knowledge of the Bible, I had to listen very closely.

Unfortunately, if you are going to postulate a debate on a subject you should do your homework. Brown did his homework but this Ph.D. didn't. There is a lot of other information that supports Brown's thesis and I was hoping to read/hear good contrary evidence in this book. The only arguments against The DaVinci Code seem to be faith-based so far. Brown's book only claimed to be a novel (with a single statement about fact in the introduction) but this rebuttal claims much more than it delivers. Disappointing.

Many books are out but Dr. Bock is one of the best writers I've read.

The code has been successfully broke.

An Extremely informative book,yet easy to follow and understand.
I personaly know Dr. Bock from attending the church where he taught about 15 years ago,and have always been impressed by his ability to explain deep subject matter in a way easy to comprehend.
I very much enjoyed this book and recomend it highly.

Wonderful. This writer is really knowledgeable and is truly inspired by the Divine.

This book is great!!!

While listening to this audio book, I found that it had a strange effect on my mind and came to the conclusion that one of the best uses of listening to this book was to cure insomnia. This book is guaranteed to put you into a deep sleep within a chapter. If sleeping is not an issue, another great use is to fix a table that has one leg shorter than the others. This book is also great to keep in the bathroom-it comes in handy if you run out of toilet paper.