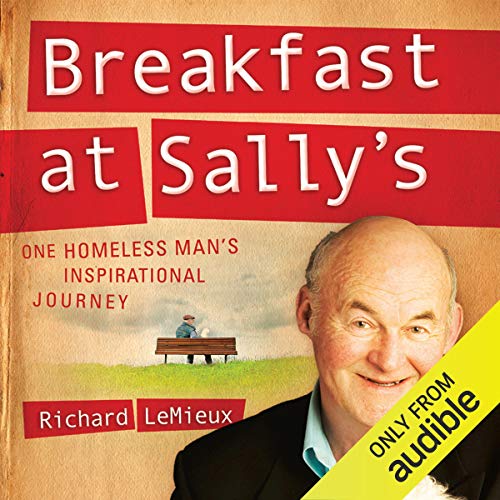 A happy husband and successful business owner, author Richard LeMieux suddenly loses it all: luxury cars and rounds of golf give way to homelessness and Salvation Army dinners in this real-life riches-to-rags tale of hardship and redemption. Smoky-tongued baritone Dick Hill performs here with humility and conviction, conjuring shades of the great folk storyteller Utah Phillips, himself no stranger to the rambling life. Living in a van with only his dog Willow for companionship, LeMieux is moved to the brink of suicide. Struggling with depression and unable to find medical help, LeMieux travels from one town to the next, finding a renewed sense of community and purpose amongst the similarly hard-up friends and acquaintances he meets along the way.

“The book reads like a novel... But it has the ring of truth, and an uplifting message that endures.” (The New York Times)

Once a happily married businessman, an avid golfer, and the proud owner of several luxury cars and three boats, conservative-minded Richard LeMieux saw his fortune change almost overnight. In this now classic memoir that has touched thousands of readers across the globe, LeMieux describes his descent into homelessness and his struggle to survive personal and economic disaster.

Evicted from his home in 2002 and living with his dog, Willow, in a beat-up old van, LeMieux finds himself penniless and estranged from his family and friends. He dines at the Salvation Army (Sally’s), attempts suicide, and is treated at a mental hospital, where he is diagnosed with depression.

Writing on a secondhand manual typewriter, first at a picnic table in a public park, and then wherever he can, LeMieux describes his odyssey and the quirky, diverse, and endearing cast of characters found among the homeless people of Bremerton, Washington, and by extension, everywhere else.

Breakfast at Sally’s is a rare inside look at how the other America lives, and how one man, beaten down and alone, was able to reconnect, to find good people, and, ultimately, with their help, to persevere. Updated with an all-new chapter, interviews with the author, a book club guide, and an obituary for Willow.

This book is a very engrossing look at homelessness, from the point of view of a man who had everything, lost it all, and somehow regained hope again. His depiction of life on the streets, the network of people - the chance encounters, the long-term relationships - was beautifully rendered. Some portions of this book made me laugh; others made me cry. With beauty, grace, humility, and grit, Richard LeMieux captured my heart and made me question my beliefs about the homeless in my own little slice of Canada.

Dick Hill did a wonderful job with this book, in my opinion. Based on many of the reviews I have read of his performances, this is a narrator many either love or strongly dislike; Breakfast at Sally's is a good book to introduce you to him.

This was not a book I could listen to all in one sitting - at points I was so moved or simply had to stop to digest what I was reading - but it is so well worth your time, money or credit.

I just didn't buy into the story. It seemed more fictional than non-fiction.

What could Richard LeMieux have done to make this a more enjoyable book for you?

This is an account of his experience so what happened, happened. However, having a similar experience (living out of my car for 9 months) I just don't believe a large portion of it.

Having been in a similar situation I just cannot buy into this story. It is more of a fictional tale and leaves me doubting the authenticity of it. But I have not been to that part of the country so it may be true. I found it hard to relate to the author and characters. Many people have liked this book but unfortunately I found myself wanting my money back.

I loved the story I want to know more about the other characters It was a lot of bad language but it was not inappropriate however I had to turn my device down so my neighbors didn't hear the language. I already listened twice and probably will again. I
loved the dog too I did recommend it to a friend with a warning about the language

I think Richard was. but I loved "C" and Willow

Yes but I went to sleep and had to restart

When is the follow up book coming out. and yes keep Dick Hill as the reader

This guy is very inspirational.

If you are at a low point in your life and need some inspiration, look no further.
The questions at the end of this audio pose some serious thought, I really enjoyed it.

If you could sum up Breakfast at Sally's in three words, what would they be?

Breakfast at Sally's opened my eyes to see the less fortunate, in a new light. I never really thought of myself as a judgmental person, though realized that culturally my mind was conditioned to be one. I love this story and did not want it to end. I now look for any opportunity to make a difference in a homeless persons life. Rather it's to give them few dollars when they ask or simply just treat them with love and kindness. It is not my place to judge there motives, just to treat them the way we all want to be treated, like a human being. I recommend this book to everyone.

Richard, clearly for his courage to tell his story. I also loved Cee, (if that is how you spell it) I love how he challenged the rules, laws and understanding of what "we" think we know of who Jesus is. His insight into God himself, helped me see Jesus's presence through out the entire story. Love that he looks out for everyone's well being. Yes he is a regular pot smoker, though honestly if that is his medication for coping, who really cares. His heart and the kindness he had for his homeless friends made that small detail so insignificant.

Not that I remember

Talk about a paradigm shift!!

High Schools should make this required reading coupled with community service. We all get in our comfy little bubbles and call anything we don't understand, "Bad." Thank you Mr. LeMieux for your perseverance to live out your most difficult struggles so you could help others.

What made the experience of listening to Breakfast at Sally's the most enjoyable?

While the story itself was captivating and held my interest, the narration by Dick Hill was outstanding, and made this book so enjoyable as an audible. The many different voices he gave to the many characters was delightful, and made me feel like I was really there.

I left this story with a whole different view of homelessness than I started with, and a much better understanding of homeless people and their many different situations. It made me both laugh and cry.

This book was so well done, I highly recommend it to anyone looking for a great read that will truly impact their lives.

Penetrating look into the lives of the homeless...

I wish he would have told the story of how he ended up on the streets, but the portraits that he paints here are vivid and touching.