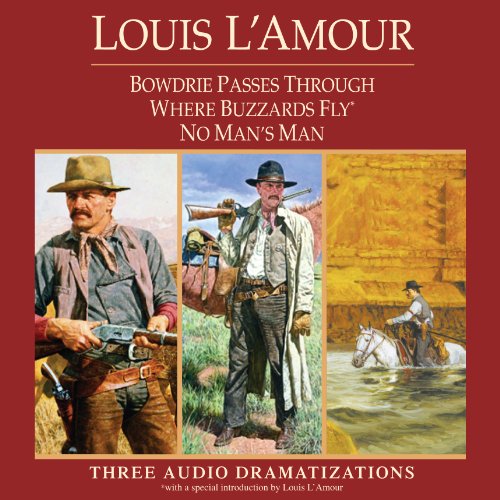 Bowdrie Passes Through - Where Buzzards Fly - No Man's Man (Dramatized)

Bowdrie Passes Through - Where Buzzards Fly - No Man's Man (Dramatized)

"Bowdrie Passes Through": Ride with the legendary Texas Ranger Chick Bowdrie as he takes up the cause of Josh Pettibone, a stubborn loner who faces the hangman's noose. Bugs Tatum wants Pettibone's land - and he's willing to do anything to get it. But Bowdrie can not rest until justice is served!

"Where Buzzards Fly": Texas Ranger Chick Bowdrie tracks the killers of an infamous Mexican outlaw, Zaparo, and 14 of his desperadoes. With only the slightest clues to the ruthless ambush, Bowdrie is led to the K-Bar Ranch, and the beautiful girlfriend of the last living member of Zaparo's gang - only to find his prime suspect is a man closer to the Texas Rangers than he ever dreamed.

"No Man's Man": Passion drives Lou Morgan to the town of Battle Basin - passion and the promise of $5,000. For in this dusty town lives the wildly irresistible Nana Maduro, the woman Morgan loved enough to kill for, the woman who walked away from him without a word. Now, bitter but still caught in her spell, Morgan hires on with one of Nana's suitors to eliminate that man's rival. But when Morgan finds himself the target of two brutal killers, he can't help but wonder what Nana's admirers are really after...or if he'll live to find out.

One of the best ever

I had a cassette tape of this very story back in the 1970s. I loved it then, and I love it now. One of the best Louis L’Amour western audio adaptations ever!