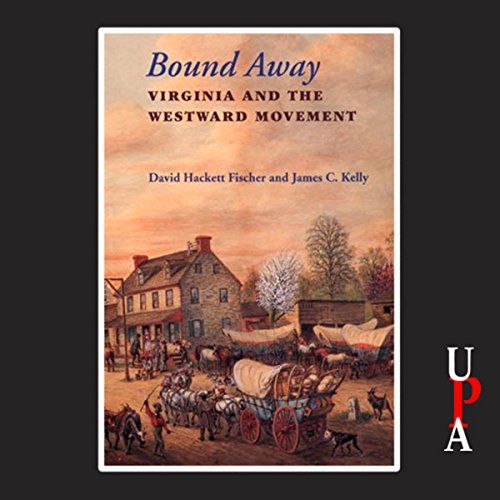 Bound Away offers a new understanding of the westward movement. After the Turner thesis, which celebrated the frontier as the source of American freedom and democracy, and the iconoclasm of the new western historians who dismissed the idea of the frontier as merely a mask for conquest and exploitation, David Hackett Fischer and James C. Kelly take a third approach to the subject. They share with Turner the idea of the westward movement as a creative process of high importance in American history, but they understand it in a different way.

Where Turner studied the westward movement in terms of its destination, Fischer and Kelly approach it in terms of its origins. Virginia's long history enables them to provide a rich portrait of migration and expansion as a dynamic process that preserved strong cultural continuities. They suggest that the oxymoron "bound away" - from the folk song "Shenandoah" - captures a vital truth about American history. As people moved west, they built new societies from old materials, in a double-acting process that made America what it is today.

Fischer and Kelly believe that the westward movement was a broad cultural process, which is best understood not only through the writings of intellectual elites, but also through the physical artifacts and folkways of ordinary people. The wealth of anecdotes in this volume offer a new way of looking at John Smith and William Byrd, George Washington and Thomas Jefferson, Daniel Boone, Dred Scott, and scores of lesser known gentry, yeomen, servants, and slaves who were all "bound away" to an old new world.

"An exciting and valuable book.... A must for all interested in the expansion of the American frontier." (Carol S. Ebel, Georgia Historical Quarterly)

What listeners say about Bound Away

Good mix of historiography and facts

Fisher offers a well-supported thesis on the effect of the westward movement on the development of an open society in America. The book mixes theory, historical social trends, and lots of interesting stories. It skips back and forth in time as it moves from topic to topic, but it never seems jarring. I learned a great deal about Virginia's influence on other, younger settlements. My only qualm is the narrator's incorrect pronunciations of some Virginia cities and counties, such as the City of Staunton, Botetourt County, and Loudoun County. Other than that, a first-rate reading of a first-class book.

This book will appeal to readers with a deep interest in American history and a curiosity about the roots of the unique cultural values and mores of each region of America. Excellent and revealing scholarship which has insughts for understanding even 21st Century life, politics, and religion.

If you have read Albion’s Seed, then you really don’t need this one. There are a few new facts but it’s mostly the same, just more focused on Virginia. The narration is excellent, except Miles doesn’t pause long enough after reading headings, so one can think they are an incomplete sentence. Like all audio books from University Press that I have listened to, the recording is jerky at the chapter markers. But all in all, you can’t beat Hackett as an historical author.