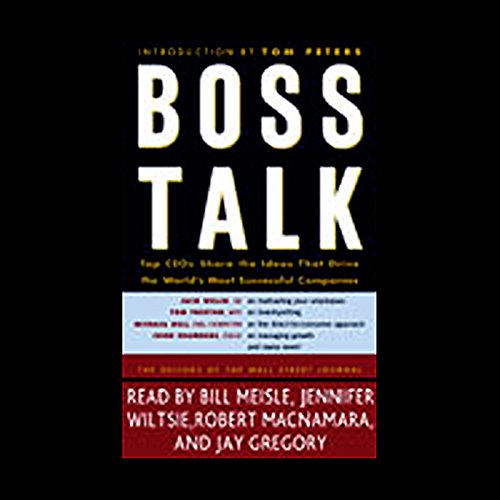 By: The Editors of the Wall Street Journal
Narrated by: Jay Gregory,Robert MacNamara,Bill Meisle,Jennifer Wiltsie
Try for £0.00

Timeless and effective business lessons from 21 top CEOs. Every business leader - from manager to entrepreneur - wants to know the ideas that motivate and inspire the world's most successful CEOs. Boss Talk presents expert advice on critical issues from a wide range of CEOs including Michael Dell, Jeff Bezos, Tina Brown, Ian Schrager, Steve Ballmer, and Sanford Weill. The topics they cover include:

What listeners say about Boss Talk


I was very excited about this book's topic. I thought the concept was great. However, almost all these "boss interviews" focus on topics like mergers and acquisitions, board talks, and other topics that won't help middle managers. There are a few good comments and insights about personal achievements and business success stories. However, unless you are a member of the "C-suite" (CEO, CFO, etc), you will find this book entertaining at best.

The Jack Welch interview was the best one - but I had already read "Straight from the Gut" and "Winning", two excellent books I highly recommend becuase they are eventually much more insightful and inspiring than "Boss Talk".