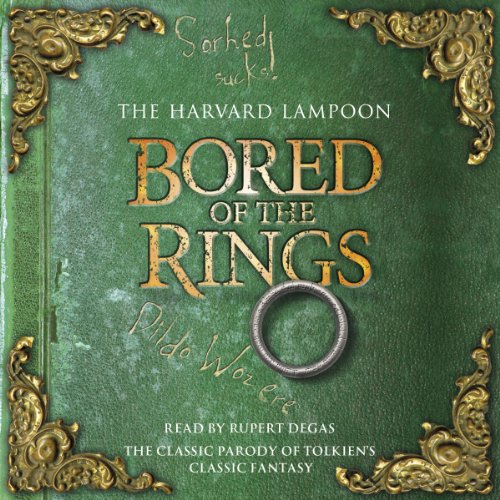 Bored of the Rings

By: Harvard Lampoon
Narrated by: Rupert Degas
Try for £0.00

Sometimes childish, sometimes rude, always clever and always very, very funny, this book has delighted most, and outraged a few, Tolkien fans in the US for more than 40 years. Pulling in references to popular culture and fantasy literature as a whole, this is a killingly effective parody of The Lord of the Rings. From the dreary Goddamn (Gollum) to the feckless Arrowroot (Aragorn), the bungling Goodgulf (Gandalf) to the timid, mean-minded boggies Frito (Frodo) and Dildo (Bilbo), no character is safe. Fleeing the Nozdrul, bored by acid-casualty Tim Benzedrine and harassed throughout by the minions of Sorhed, the fellowship move through a Middle Earth like no other. Short, sharp and very much to the point, even Tolkien would be hard-pressed to suppress a giggle at Bored of the Rings.

Read by Rupert Degas. Rupert Degas has narrated over 100 audiobooks. He has recorded a diverse range of authors, from Andy McNab, James Patterson, Wilbur Smith, and Chris Ryan to children's authors such as Derek Landy, Darren Shan, Jamie Rix, and Philip Pullman. He has narrated books by Patrick Rothfuss, Haruki Murakami, Mervyn Peake, Rose Tremain, and Cormac McCarthy as well as recording classics from Kafka, Conan Doyle, Lovecraft, and Wilde. Rupert has lent his voice to numerous cartoons, including Mr Bean, Robotboy, Gumball, Thomas & Friends,and Bob the Builder and has performed in over 50 radio productions for BBC Radio 4, including The Brightonomicon and The Hitchhiker's Guide to the Galaxy. He spent 18 months in the West End performing in Stones in his Pockets and was in the original London cast of the smash-hit comedy The 39 Steps. Produced by Peter Rinne.

What listeners say about Bored of the Rings

Worth a snigger or two.

Perhaps not as stirring as I'd already read it but still worth a few new chuckles produced by the delivery.
That said chunks of humor do rely on replacing words with brand names or chemical compounds... sometimes it works, sometimes it doesn't. Short, silly, worth a laugh. Much stronger in its earliest chapters. Later ones lose their punch and feel like a rush to wrap the story up.