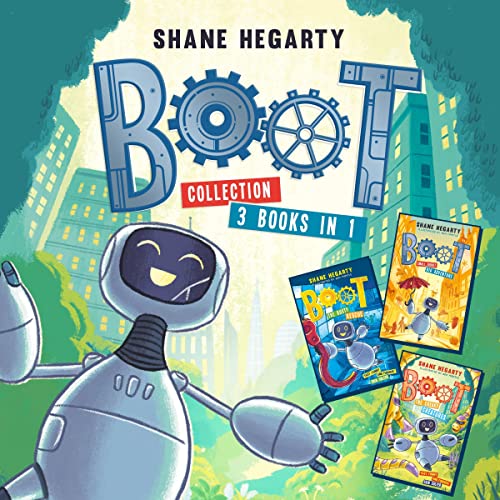 By: Shane Hegarty
Narrated by: Joanna Ruiz
Try for £0.00

Boot series - three audiobooks in one by Shane Hegarty:

When toy robot Boot wakes up at a scrapyard, it has no idea how it got there and why it isn't with its owner, Beth. It only has two and a half glitchy memories, but it knows it was loved, which means something important to humans. Boot soon realises its emotions make it different to other robots, who just function and don't think. Boot is scared but tries to be brave, which is hard when its screen keeps showing a wobbly, worried face. Luckily Boot meets Noke and Red - other 'advanced' robots who have learned to survive in secret.

Toy robot Boot has come a long way since it woke up in a scrapyard with only two and a half glitchy memories. It has a home with its robot pals in an abandoned amusement arcade and has discovered what true happiness is - although it's still not sure why humans are so leaky and weird.... But when Boot and the gang stumble upon Rusty, an old, broken robot, forgotten in the back of a testing lab, it's time to spring into action. Boot knows there's something special about Rusty - but can they free the old robot and help it find its purpose?

Boot was once a toy robot, but it has come a long way since it was scrapped and woke back up with only two and a half glitchy memories. When Boot catches sight of a robot pet it used to know - Mr Piggles - our hero and pals follow it to a beautiful green square in the city of skyscrapers. Here they find not just real nature, but also a haven for broken and rejected pets. They also meet the children who look after the pets, and for whom this green space is a sanctuary too. But Boot is distracted by its emotions, swinging from happy to sad....

What listeners say about Boot Collection