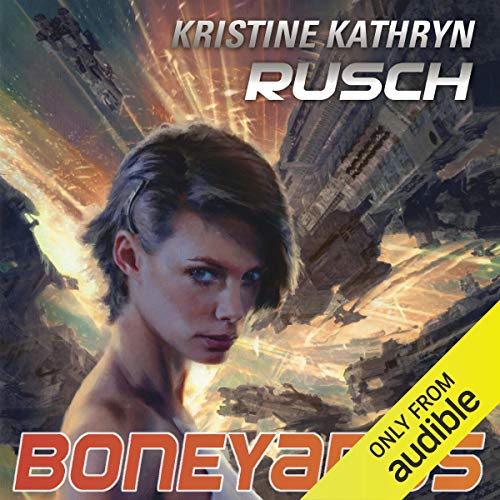 The novellas in the Diving universe have won three Asimov's Readers Choice Awards. When multiple Hugo Award-winner Kristine Kathryn Rusch decided to put her stamp on classic space opera, readers and listeners wanted more. Now Rusch's popular character Boss returns in a whole new adventure, one that takes her far outside her comfort zone, to a sector of space she's never seen before.

Searching for ancient technology to help her friends find answers to the mystery of their own past, Boss ventures into a place filled with evidence of an ancient space battle, one the Dignity Vessels lost. Meanwhile, the Enterran Empire keeps accidentally killing its scientists in a quest for ancient stealth tech. Boss's most difficult friend, Squishy, has had enough. She sneaks into the Empire and destroys its primary stealth-tech research base. But an old lover thwarts her escape, and now Squishy needs Boss's help. Boss, who is a fugitive in the Empire. Boss, who knows how to make a Dignity Vessel work. Boss, who knows that Dignity Vessels house the very technology that the Empire is searching for.

Should Boss take a Dignity Vessel to rescue Squishy and risk losing everything to the Empire? Or should Boss continue on her mission for her other friends and let Squishy suffer her own fate?

Filled with battles old and new, scientific dilemmas, and questions about the ethics of friendship, Boneyards looks at the influence of our past on our present and the risks we all take when we meddle in other people's lives. Boneyards is space opera the way it was meant to be: exciting, fast moving, and filled with passion.

Pay another visit to the Diving Universe.

What listeners say about Boneyards

3RD BOOK IN SERIES-YOU NEED TO READ/LISTEN TO 1ST TWO,EXCELLENT FOLLOW ON FAST PACED GREAT CHARACTERS,FULL OF MYSTERIES,LEAVES YOU WANTING THE NEXT INSTALMENT NOW.

At last a good book!

This is a much better book then the first two. Easy to listen to, well written and a good story. Their needs to be another book or several books!

Another great story as always! Loved it I'm hooked on these adventures. On to the next one.

What did you love best about Boneyards?

Would you recommend Boneyards to your friends? Why or why not?

Am not sure, the story jumps back in time a lot - each jump back is clearly indicated, the jumps back in time is not. This makes sections the book a bit frustrating to listen to, you are not told when it jumps forward in time so you just have to guess.

Have you listened to any of Jennifer Van Dyck’s other performances before? How does this one compare?

The performance: A bit fast in parts (as all her performances) but really well read. She is great at what she is doing

The book made me chrinch at times due to the non-existing telling of when a jump forward did occure. This made me go back several times to ensure I got the story right. Frustrating!

PLEASE let the listener know ALL times one jumps back and forward on a story, this book only let me know when the author jumps back.. It is really frustrating - and kill much of the joy of listening to the story

The first book of this series was okay.
The second book was pretty tedious.
Ten minutes into the third book, I determined it wasn't going to get better, and gave up.

Nice to be back

Maybe not as good a story as the previous two in the series, but it's always delightful to return to Boss's universe. Time well spent.

a good book if you've read the rest of the series, but it jumps around in time through the whole book... one page it's current time and the next it's twenty years ago.

Not as good as the first two

I agree with the other reviews that say this narrator isn't the best. She's growing on me (or maybe I'm just getting used to her), but she still isn't doing these books justice. They're first person, so they should be especially emotional, rather than be so monotone/flat. I will say though, that after some recent books, at least she can pronounce words correctly. Compared to the first two books, this book is less focused. There are two POVs this time: Boss and Squishy. Boss's sections are ponderous and slow. Boss builds her business. She and the captain try to figure out where the fleet might have gone. They visit a few worlds and find only a few clues. Finally, at the end, they get a better lead, but the book ends before they can explore it. Very little seems to get resolved, although it looks like the action might finally arrive in book 4. Squishy's timeline jumps back and forth with abandon, giving you moments in time ranging from present day to back when she was in college. It tells her whole history with stealth tech and explains her reactions to the empire's research of it. Squishy's part has some action, but I'm not sure her story even needed to be told. It didn't seem to advance Boss's story much, and I can't help but wish the author had gone in a different direction and stuck with Boss.I wanted to like this book, but it just didn't live up to my expectations.

What would have made Boneyards better?

A less harsh reader, I could not bring myself to finish the story. The reader was in my way.

What was most disappointing about Kristine Kathryn Rusch’s story?

Would you be willing to try another one of Jennifer Van Dyck’s performances?

Not quite what the synopsis promised.

I've read the other Diving Universe books and loved them, but this isn't quite up to the same caliber as the previous two. It's called