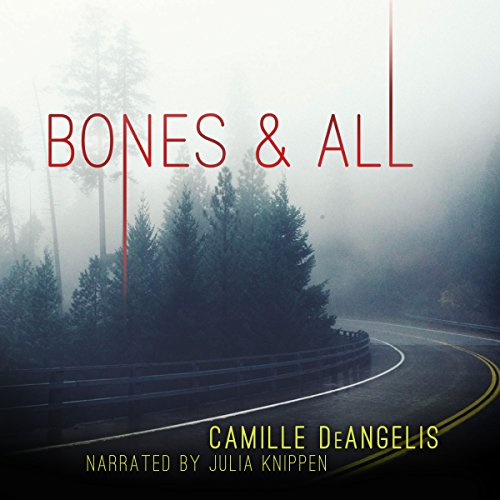 By: Camille DeAngelis
Narrated by: Julia Knippen
Try for £0.00

Maren Yearly is a young woman who wants the same things we all do. She wants to be someone people admire and respect. She wants to be loved. But her secret, shameful needs have forced her into exile. She hates herself for the bad thing she does, for what it's done to her family and her sense of identity; for how it dictates her place in the world and how people see her - how they judge her. She didn't choose to be this way.

Because Maren Yearly doesn't just break hearts, she devours them. Ever since her mother found Penny Wilson's eardrum in her mouth when Maren was just two years old, she knew life would never be normal for either of them. Love may come in many shapes and sizes, but for Maren, it always ends the same-with her hiding the evidence and her mother packing up the car.

But when her mother abandons her the day after her 16th birthday, Maren goes looking for the father she has never known, and finds much more than she bargained for along the way.

Faced with a world of fellow eaters, potential enemies, and the prospect of love, Maren realizes she isn't only looking for her father, she's looking for herself.

Camille DeAngelis' Bones & All is an astonishingly original coming-of-age tale that is at once a gorgeously written horror story as well as a mesmerizing meditation on female power and sexuality.

What listeners say about Bones & All

I have gotten books to read for review and decided it wasn't for me. Honestly the narrators were lacking or the writing was not believable or both and giving a review was painful not to mention the agony of listening! I understand this is their art after all.
This book changed the game. I couldn't wait to listen. Very different with a sweetness that reminded me of The Girl with Everything. Couldn't even begin to guess what was coming next. Loved loved loved it! Maybe not 5 stars but a solid 4.5 and how many of those do I find?

A TASTY TREAT or THE SOFTER SIDE OF CANNIBALISM

Maren has a secret.

This is an amazing coming of age story of a gentle,sensitive and insecure girl with a unique dilemma. She eats people. Abandoned at age 16, she sets off to find her father and hopefully the truth behind her actions. She discovers love and acceptance from others and within herself along the way.

Ms. DeAngelis' dialogue and descriptive writing is a pleasure to read. I was quickly drawn in to the story. The characters' personalities and emotional depths are fantastically developed and defined. I feel like I know Maren and hope to meet up with her again, soon!

This is not a fairy tale with a "they live happily ever after". In fact, I was somewhat disappointed with the surprise topsy-turvy ending. But life so on and so does Maren.

I am SO glad I had today off because once I started I did not put it down. Julia Knippen's narration was incredible. It was her soft-spoken rendition of Maren and her ability to make all the characters come through that made the book come to life. Bravo to Ms. DeAngelis and Ms. Knippen for a book well done.

This book was gifted to me by the author, narrator and/or publisher via AudioBlast in exchange for an unbiased review.

I truly enjoyed this book and will gladly pay for a sequel and the opportunity to visit with Maren again.

I really loved this book. I wasn't sure if I would when I started it, but I found Maren to be much more sympathetic than I would have thought. I think it was a wise choice to use the first-person perspective which made Maren a complex character. The dialogue was believable, but I had a bit of a hard time understanding how the Eaters work. However, I think it's better that we didn't learn the graphic details of the eating process as it would have made Maren less sympathetic and would have changed the tone of the book.

I think Julia Knippen really helped bring out Maren's personality. Her voice was demure and a bit shy and fit the writing style and situations perfectly.

**I received a copy of this book in exchange for an honest review.**

What did you love best about Bones & All?

It was an interesting and really weird story...Maren is a tough little cookie...good thing or she would have never survived this...

What was one of the most memorable moments of Bones & All?

The ending when she warns him....the ending line of this book was awesome!

I have listened to several of Julia's performances...she was actually the reason I gave this book a chance....and I am glad I did!

If you could take any character from Bones & All out to dinner, who would it be and why?

I dont think this is an appropriate question for this book..LMAO!!!!!

This is an interesting take of cannibalism in everyday society...Maren has been this way since birth, causing her mom to move around all the time to protect her child....well when Maren turns 16...her mom has had enough and leaves her to fend for herself...leaving a note saying she was sorry, and some cash with Maren's birth certificate....Maren goes in search of her mother, and her unknown father...meeting others like her along the way and learning there is more people out there like her than she had ever known..

IT WAS A GREAT BOOK AND THE NARRATION WAS SUPERB!!!! I RECOMMEND...AND I WOULD LIKE MORE!!!!

The only thing I could ask for is MORE!!!

I was provided this audiobook at no charge by the author, publisher and/or narrator in exchange for an unbiased review via Audiobook Blast.

firstly it starts off a little slow and maren is unsure of herself. she overcomes emotional, financial, and physical obstacles. she is only 16 but she is a monster.

the narrator did a great job and was believable. her voice changed with the characters. loved it! that last sentence was powerfully executed by narrator as the author I'm sure intended it. it literally sent goosebumps up spine. :)

the only thing I could ask for is MORE!!!!
I want a second book. I want a grown up version of her accepting herself for what she is, an eater.
I want more details. more blood, guts, and gore!

Would you consider the audio edition of Bones & All to be better than the print version?

I've never read the print version, but I do prefer audiobooks to the real thing since I can listen to them while I work, drive, or clean. It is like being a little kid again and being read to by a parent.

What was one of the most memorable moments of Bones & All?

One of my favorite scenes is when Maren meets her father and is reading his journal. You finally get some answers to questions.

What does Julia Knippen bring to the story that you wouldn’t experience if you just read the book?

She brought the characters to life by the voices she gave them. I loved how each character sounded different so i was easy to get to know the characters. When I read it, I don't tend to give them unique.

Most definitely. I was trying to figure out what she was and why. The story was really good and pulled you into it the more you listened.

I received a copy of this audiobook in exchange for an unbiased review.

A view through a curtain slit to a haunting world

It's a gentle terror, the fear of the unexplainable loss of people in your city, in your community, ...in your home.

This is a story that's hard to explain without giving away the juicy parts. But what I will tell you is that the author, Camille DeAngelis, taps into a subconscious fear we all have. I had an uneasy feeling through out the whole book, on the edge, fearing for the protagonist and fear of her.

Personally, cannibalism is a deep fear of mine and I'm honestly am surprised I was able to over look this aspect and focus on the characters and story, which I enjoyed but am sore at the ending (its not a bad ending in anyway I had just wished for different one.)

I loved it, but the ending could have been better. I hoped for more for it.

I've read a many of books in my time but this was such a romantic take on a subject so taboo in modern day culture that it made me shiver. This was an excellent book. PLEASE READ ITS WORTH EVERY PENNY.

I was surprised just how much I loved this book! Marren and her mom have always moved around because Marren did a 'bad thing'. It turns out that she is not alone.I was given this book free for an honest review.