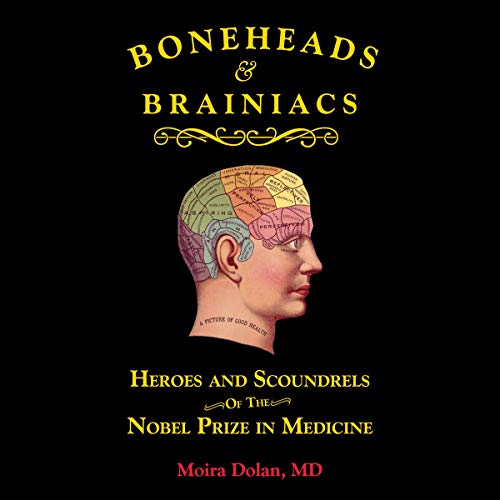 Boneheads and Brainiacs: Heroes and Scoundrels of the Nobel Prize in Medicine

Even the greatest minds in medicine have been terribly, terribly wrong.

The inventor of the lobotomy won a Nobel prize in medicine for destroying his patients' brains. Another Nobel laureate thought malaria cured syphilis. The discoverer of anaphylactic shock also researched the spirit world and ESP. A pioneer of organ transplants was an ardent eugenicist, while the founder of sports physiology heroically spoke out against Nazism.

Boneheads and Brainiacs profiles the winners of the Nobel Prize in Medicine from 1901 to 1950 - a surprisingly diverse group of racists, cranks, and opportunists, as well as heroes, geniuses, and selfless benefactors of humanity. Forget all the ivory tower stereotypes of white-coated doctors finding miracle cures. Boneheads and Brainiacs reveals the messy human reality behind medical progress, in a highly entertaining audiobook for the ordinary listener.

Some were bad scientists; others were great scientists and lousy human beings. But the majority of these researchers produced knowledge that now saves millions of lives - priceless discoveries like the role of vitamins in nutrition, the dangers of radiation, treatments for diabetes and deadly infectious diseases, and more. Boneheads and Brainiacs showcases the enthralling, all-too-human personal lives that made modern medicine possible.

What listeners say about Boneheads and Brainiacs: Heroes and Scoundrels of the Nobel Prize in Medicine

Either Good or Evil

There is some twisting of facts to show that some scientists are pure evil and others are angles. There is a good chance that a scientist is great, philanthropist and worthy of the prize if one is a jew or had helped a jew. Overall, it can be misleading if you want to listen to an unbiased history of medicine.

I had no idea the Nobel prize had such checkered past. I knew of Nobel and the munitions empire but never suspected that the winners were so tainted by greed and ignorance. And the judges, almost worse than the winners! quite amazing.

Extremely pleasant reading not only insightful and educational but highly entertaining, it was difficult to put down, only sorry it ended.

Fascinating dive into the history of medicine

Each chapter covers a year and who won the prize that year. It is meticulously researched, often funny, often horrifying. Will people in a hundred years think our current medicine is both barbarous and prescient? I think so. Great read!