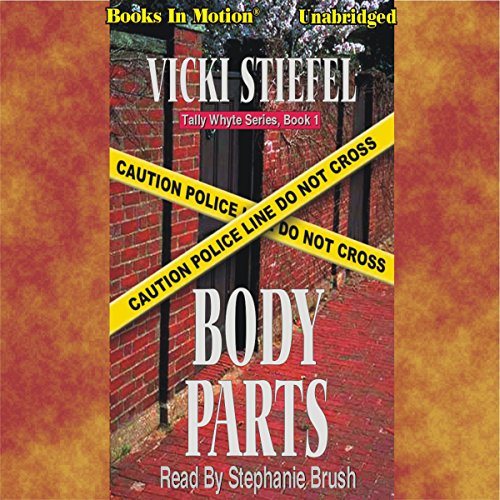 They call it the Grief Shop. It's the Office of the Chief Medical Examiner for Massachusetts, and Tally Whyte is the director of its Grief Assistance Program. She lives with death every day, counseling families of homicide victims. But now death is striking close to home. In fact, the next death Tally deals with may be her own. Boston is in the grip of a serial killer known as the Harvester, due to his fondness for keeping bloody souvenirs of his victims. But mny of those victims are people that Tally knew, through her work or as friends. Tally realizes there's a connection, a link that only she can find. But she'd better find it fast. The Harvester is getting closer.
©2004 Vicki Stiefel (P)2007 Books in Motion

What listeners say about Body Parts

I can't decide whether its the writing, the reader or both that makes this unlistenable. This was awful, the reader contantly shouts and as its written in the first person you have no empathy or like for the main character. I found Talia White to be self obsessed and annoying, there was nothing about her to like. I can't even listen until the end because the narrator is so awful, but nothing about the story makes me interested enough to want to get to the end anyway. The story has been told a thousand times, (there is no originality) and by much better writers. Please do not waste your money.

Body Parts is a grim novel with a spunky heroine that I liked. Vicky Stiefel doesn't cover any new territory in the first book of her series about Tally Whyte, a Massachusetts homicide counselor, but the familiar landscape is interesting.

The first-person narrative is almost pitch-perfect throughout, and Tally Whyte is a likeable character from the first page. She also has an interesting job, one that I wasn't familiar with, and I enjoyed the peek into the world of a homicide counselor. I figured that grief counselors generally came out of personal funding and didn't know that the state governments sometimes supplied those.

Body Parts introduces listeners to Tally's world, and the journey is a fun one. Tally knows lots of interesting people and has relationships with workers and her sometime lover that provide lots of friction. I enjoyed the semi-mother/daughter relationship with her boss, and the definite points of conflict she has with homicide detective Rob Kranak feel right and deepen both characters.

The mystery/suspense elements of the book aren't anything flashy or new. A serial killer is murdering beautiful women and chopping off body parts, hence the title of the novel. No one knows why the parts are being taken, other than as possible trophies or souvenirs. In fact, no one knew there were as many cases involved as there are until Tally starts her investigation. That's standard fare for many suspense novels.

However, the plot jumps around a lot, introducing a number of characters to the point that I had to stop and think every now and again about who this person was. Granted, I didn't get to sit down with this book nonstop and that probably would have altered my take a little, but not many readers have that kind of time. Also, the story provides legitimate twists and turns that delighted and shocked me, but there are also a number of over-the-top scenarios that I couldn't completely buy. One particular incident was when Tally was in disguise, sitting beside Kranak, and he didn't recognize her. I just couldn't take that seriously.

I also had some problems with the killer's overall motivation for the murders and body-part snatching. The reasoning is creepy and brings the readers to a nightmarish finish, but I struggled to believe it.

Overall, Stiefel delivers a solid read that will entertain fans of serial killer novels that like a little romance on the side. There are three other books in the series so far, and I'll be reading those as well.

Well i love scary books and it was over quick so it didn't have time too hurt. I like the author, my first book of hers, and I definitely would read another.

This book starts off running and will keep you on the edge of your seat.

This is a great first novel. The narration is crisp and clean, characters are given distinct accents invoices and the story is absolutely incredible. I will be reading this one again and again. Great read!