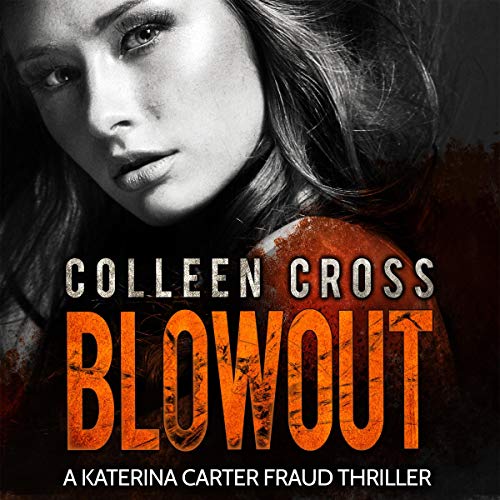 By: Colleen Cross
Narrated by: Petrea Burchard
Try for £0.00

The next audiobook of psychological suspense and obsession from the author of the blockbuster best seller legal thriller Exit Strategy.

On fraud investigator Katerina Carter's trip to a remote island aboard a luxurious yacht, she suspects the boat's slick and charming owner is hiding a dark secret. With her cunning instinct for sniffing out malevolent cons, Kat tries to warn her friends that something is very wrong with their host and that his moneymaking scheme smells fishy. And why is she the only one who thinks he's not being completely honest? While exploring the island, Kat and her friends research the rumors of a sinister cult, the Aquarian Foundation, and search for buried treasure.

The cult swindled people out of their money, and now the same situation is starting to eerily echo their present circumstances. That is if Kat can prove to the others that if something sounds too good to be true, it usually is....

When Kat's warnings fall on deaf ears, she uncovers a horrifying truth that will place those closest to her in mortal danger. Now it's a race against the clock for Kat to expose a killer before he strikes again.

Blowout is the third book in the Katerina Carter Legal Thriller series and a riveting psychological legal thriller you'll want to listen to with the lights on!

What listeners say about Blowout

I love this series of books. They are delightful mysteries with a great cast. I love the Uncle in these stories and think he’s my favourite audio character at the moment as he reminds me of some of my family. These books never disappoint it’s a fast paced twist of a story which makes you smile.

Hot on the heels of Game Theory, Katerina Carter is at it again, sorting the wheat from the chaff. She is usually aided and abetted, and occasionally hindered, by her boyfriend Jas and her Uncle Harry, and this adventure proved no exception. I felt for Kat in this book; her friend has been duped by a conman, who has also managed to turn Jas and Uncle Harry's heads. So much so they never even noticed when she got left behind in the cave. Kat behaved way better than I would have done; I'd have killed Jas! Kat goes about building the case with solid evidence before confronting her doe eyed friend, boyfriend and uncle. Thank goodness they finally listen or we might have had a very different outcome. Another intriguing and multi-layered puzzle solved expertly by Kat. Phew! The author notes at the end of the book were very interesting and much appreciated. Excellent narration from Petrea Burchard.

Kat doesn’t miss a thing. She is a bright likeable character. She’s going to get better with each story as we get to know her more & shes great now.
This story highlights fraud & how anyone could be taken in & taken for a ride.
They also research a cult & it’s ways. Which was true & weaved into the story. Which was really interesting.
A great story, lots of details & great to listen to.
Narrator was great, she carries the story along fab, tempo was great & I thoroughly enjoyed this

Another great story from Colleen Cross, superbly narrated by Petrea Burchard. I enjoyed the intrigue and detailed descriptions and merging of historical facts with fiction. Kat has her hands full when all around her seem to be losing their heads in frustratingly simple fashion. Her patience seems to show no bounds when her boyfriend, best friend and uncle are deceived by the charismatic Rafael. The setting on a luxury yacht and secretive island along with scary caves adds to the story. Another good listen on audible.

These books get better and better

Once again Katerina Carter has to solve another fraud case. Her best friend has been duped by a conman, and it looks like her boyfriend and uncle are also being taken in by him.

This is the third book I’ve read/listened to in this series and I want more! The characters are all very believable. I love Kat. She is smart and tenacious so why oh why does she put up with Jas?? I think it’s time she ditched him! The story, as always, is gripping and suspenseful and paced just right, and I loved hearing about the history of the island and the cult.

Petrea Burchard’s narration was wonderful and she differentiates between the different voices brilliantly, especially Uncle Harry.

The best one yet

The third book in the Katerina Carter series and in my opinion the best one yet! Kat has to rescue a friend from a charismatic conman despite fierce opposition. I particularly enjoyed the fact that the story revolves around Kat’s circle of friends and family rather than a soul less multinational company.

I think this is the most intense story in the series of Katerina Carter. I was hanging on the edge of me seat through the whole book. I could not put it down because I had to know what would happen next. Colleen Cross is a wonderful suspense writer. She always delivers a book full of intrigue and twists. Blowout perfectly fills the need for a suspense story. It brings some personal touches to it and we get to know a little more about Katerina and her uncle. I loved this story from the first chapter. I look forward to reading more in this series.

Petera Buchard keeps this series consistent with the narration. Each character is always the same tone and infliction. Petrea makes the series flow from one book to the next. I felt as if it were a TV show and each book was another episode. I enjoyed this narration and look forward to hearing more.

This has lots of twists and turns throughly enjoyed this book. The story of brother x11 is fascinating

Katerina is very suspicious in this story. Possibly too suspicious for my liking, from the get go, although I hope my friends are as supportive as she was.

The story was enjoyable and has some interesting history in as well. Would love to see the caves and islands described

Another fantastic book by Colleen Cross, the third in the series with Kat Carter, fraud investigator.

In this book Kat, Jace and her Uncle Harry are with a friend on a yacht , but there is something mysterious about their host. Plenty of adventures are to be had by Kat in this installment. This is a personal case as the person involved is Kat’s best friend, I did find her friend to be a little stupid though. The book is well written, very well narrated, suspenseful. A worthy read or listen. I was given an audiobook from the author in exchange for a review.

This is the second book I have “read” in this series! It’s simply fun. The characters are next door neighbor type people making it easy to get into the story! It’s an easy listen and easy to track with enough plot twist to keep one engaged! I love that this book is “clean” enough for teen readers too! The narrator has become one of my favorites with a clear crisp voice and easy to distinguish character changes!

This is the third book in this series and it just gets better. This time Kat and the gang are on yacht with a killer. But it seems only Kat can see something wrong. This book kept me on the edge of my seat. I am yelling at Kat don't go in that cave. But does Kat listen? No. I was also yelling at the others that they should listen to Kat's instinct about their host. This is a great series and it will keep you entertained and you may get frustrated with Kat when she decides to do crazy things or when the others do not see what Kat sees and do not listen to her. I can't wait till the next book. The narrator does as great job bringing each character to life. The author has created fantastic characters. I was gifted this book at my request for an honest review.

Blowout by Colleen Cross brings back my three favorite characters in Katerina, Jace and Uncle Harry. The author has written a highly addictive series in the Katerina Carter fraud thrillers. I find most of the characters to be endearing. I love the twists and how the author does not write the same cliche' storyline. With each book, I learn something new, which is awesome. I thought that Petrea Burchard really brought the characters to life with her performance. She gave them distinguishable voices. I requested this review copy audiobook and have voluntarily written this review. I will most definitely listen to more books by this author and narrator. This book is a standalone listen and part of a series, and my favorite to date by the author.

Kat, Jace and Uncle Harry are set to take a small working vacation for Jace's job. He is doing an extended story on a Historical Cult. Only thing do not start out as planned. First he's late then the flight get canceled so the only option left is by boat. Kat's longtime friend stops by with her new boyfriend and he offers to take them. Everyone but Kat is drawn in to him. And she's accused of biased. Only shes not. This case is more personal for everyone. And it turns out they are all in danger. I love the historical back story and the hint of treasure. It made the story so fun and adventurous. I think this may be my favorite Katerina Carter book to date! Petrea Burchard did a fantastic job on the narration.

Plenty of adventures are to be had by Kat in this installment. This is a personal case as the person involved is Kat’s best friend, Gia, The book is well written, very well narrated, suspenseful. A worthy read or listen. It’s simply fun. The characters are next door neighbor type people making it easy to get into the story! It’s an easy listen and easy to track with enough plot twist to keep one engaged! I love that this book is “clean” enough for teen readers too! The narrator has a clear crisp voice and easy to distinguish character changes!

One thing I like about these books is that you don't have to pay full attention to still know what is going on. Very helpful when doing other things. Predictable with good narration.

Brother 12 strikes again in the form of a current thriller

Great mystery that makes me feel like I’ve learned something! Love the characters and the story line. Narrator is great also! I’ve watched some shows on brother 12 so it was cool to hear him put into the storyline!

Petrea Burchard did a Wonderful job on the narration.
Nothing ever goes as planned which makes this book so enjoyable and full of adventures. I would definitely recommend this book!! Great job!!!!