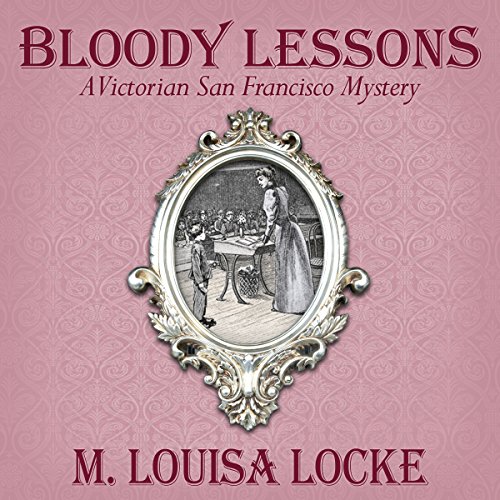 By: M. Louisa Locke
Narrated by: Alexandra Haag
Try for £0.00

In Bloody Lessons, it's the winter of 1880, and the teachers of San Francisco are under attack: their salaries slashed and their competency and morals questioned in a series of poison pen letters. Annie Fuller, the reluctant clairvoyant, has been called in to investigate by Nate Dawson, her lawyer beau. The case becomes personal when they discover that Laura, Nate's sister, may be one of the teachers targeted for attack.

In this installment in the Victorian San Francisco Mystery series, listeners will find the same blend of cozy mystery and romantic suspense, played out against the historical backdrop of late 19th century San Francisco, that they found in Maids of Misfortune and Uneasy Spirits and the short stories, "Dandy Detects", "The Misses Moffet Mend a Marriage", and "Mr. Wrong Rights a Wrong". If you are new to this series, you will still enjoy spending time with the lively residents of Annie Fuller's boarding house and visiting San Francisco when Golden Gate Park was filled with horse-drawn carriages, politics were controlled by saloon keepers, and kisses were stolen under gaslight.

What listeners say about Bloody Lessons

I really want to like the series. However, this book was the last attempt. The story is heavily focused on Nate’s younger sister, Laura. The kindest things I have to say are she’s selfish, temperamental, unkind and immature. Nothing redemptive about her maturing a bit at the very end of the book. It becomes overly repetitive that she jumps to the wrong conclusion and thinks poorly of even the people trying to be good to her and her outbursts toward others was annoying. Annie continues to lose her temper over little things w/Nate. Nate, a good guy, continues to second guess his every word w/Annie. At the end of it all, the only characters I liked or enjoyed were the housekeeper and maid and Nate (part of the time). And, none of them play a significant role in this book.

I stumbled upon this series and now I'm hooked. Can't wait till I start the next one.

Not my cup of Victorian tea...

It must just be me, since this story has an average 4 star rating, but I could not get past the first couple of chapters. The reader added no excitement to the story. Others did not seem to share my indifference to this mystery, so maybe I'm just too jaded. I may try it again later.

This is the third book in the series that I have read and am looking forward to the next two books. It was well written and did not give away the ending by too obvious clues.

Louisa Locke is one of my favoritr authors. Her plots seem well thought out and hold my attention. This one had almost too many twists.but "all's well etc". Good series, one book to go.

I can’t get past the narrator.

I have tried now a few times and it’s soooo unnatural maybe it’s just me but it just doesn’t seem to work.

This book was interesting and historical. I probably should have liked it more and given it four stars.

A fast paced story based in old San Francisco

This book takes place in 1870 San Francisco. It features working women living in a boarding house owned by another independent woman. Two of the residents serve as teachers at time when their meager pay was cut by 30 percent (to save school districts money). Yet, these credentialed women and men serve with dedication. To learn more about this page-turner book, I recommend you read it. Excellent book.

This story has everything you look for in a novel. It is story-driven, stays true to the period, with interesting and fully-developed characters. The narration was superb and added to the story. Loved it!

I really enjoyed this author's writing and have read multiple books of hers. She adds enough historical data to make you feel like you are living during that era.