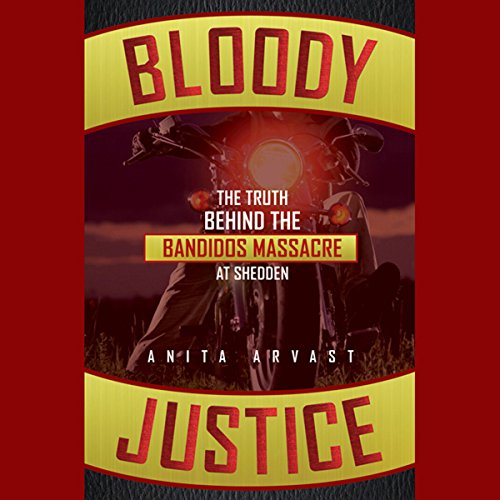 The largest mass murder in Canada's history - and how the Canadian court system let a killer go free...

On the night of April 7, 2006, eight members of the motorcycle gang the Bandidos were killed execution style and left in a farmer's field near London, Ontario. The brutal slaying, the largest mass killing in Canada's history, was reported as the work of a rival motorcycle gang. The Shedden Massacre instantly made international headlines, as did the sensational murder trial that followed. In Bloody Justice, listeners are taken to the very night of the crime itself, to the key players and perpetrators, to the events leading to the slayings - and inside a trial that let a killer go free.

Despite a lengthy, highly publicized trial and the subsequent conviction of six men, author Anita Arvast outlines her startling premise that the Crown's main witness, an informant, lied. Reflecting the author's painstaking research, attendance at the trials, and jailhouse interviews with one of the convicted, Bloody Justice outlines a fascinating case that is very much at odds with the prosecution's.

With its eye-opening research and fast-paced narrative, Bloody Justice offers a compelling new look at a shocking crime and its aftermath that will forever change any common notions of justice - on the street or in the courtroom.

What listeners say about Bloody Justice

Good insight into the ramshackle world of the Canadian chapter of the Bandidos.

Also interesting to hear about the Canadian legal system and its approach to these killings.

Only tiny beef was with the 'English' place names - some were Scottish. Either go all out British (for now ;-) ) or give each it's place.

Very well constructed and researched over all.

Found it a little hard to follow at times, is extremely in depth, which is good as it gives the whole story of everything. Very unbiased and complete unlike most other books of this sort.

Not sure how much of this story you can trust when the author makes up facts instead of checking them.

Don't trust any of the facts in this book. When someone goes on and on about facts that are wrong you should be really worried about the rest.

Story line and names were hard to follow. I also found myself losing interest and having to go back to understand what I was heading. Not the best outlaw biker book.