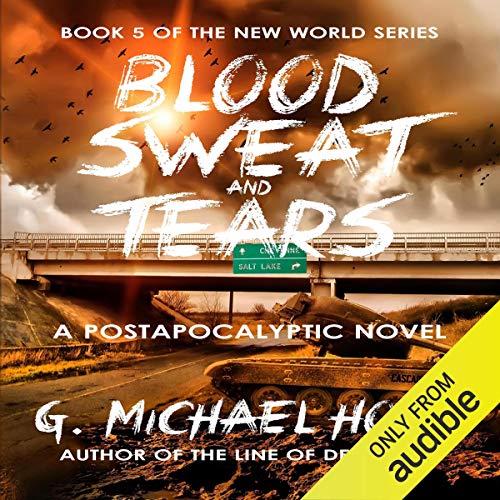 By: G. Michael Hopf
Narrated by: Joseph Morton
Try for £0.00

All Gordon Van Zandt wanted was to find a safe place for his family to settle down after civilization came to an abrupt end following the detonation of a super-EMP over North America. Through hardship and loss he found a sanctuary in the mountains of Idaho; however, the realities of the new world again come crashing down when his brother, Sebastian, is murdered by a deranged US Army officer hell-bent on crushing a secessionist movement Gordon had no part of. Forced to take sides in a conflict he sought to avoid, he comes to realize that if his family is to have peace, he'll have to go to war to secure it.

With revenge in his heart and an army at his disposal, he goes on the offensive against the very country he once swore an allegiance to defend.

President Conner's forceful determination to prevent the country from fracturing only hastened it. Faced with all-out war against the newly formed Republic of Cascadia in the Northwest and with other secessionist movements gaining steam, he discovers he's an isolated man with few options for victory.

War is hell and now many will find out how true that is.

had waited so long for this to come out (only a few months) that I devoured it like a cheese burger! great ending and had me captivated throughout. Didn't want it to end!!!!! nooo!!!!!

I wish they would not switch narrators so often, but other than that love the series

Awesome ‼️‼️ Finally after giving back to back

Very low ratings I was able to return to the five star ratings. This was really part 3 of the story. While Mr. Hopf labels it part 5 I feel as though part 3 & 4 are the same story that is already told, just from a different characters point of view. As a faithful reader, and one who is willing to pay a credit for very good but also very short books, I feel as though these short duplicates from the same story should certainly not cost an entire credit. Maybe a $3.00 offering which would be a token for his faithful fans and a lure to potential ones. I am in this fir the long haul and can't wait for the next "real" book in the series to come out.

I love this series but can’t STAND this narrator. He has little inflection and is a master at run on sentences. He makes it difficult to tell when one speaker stops speaking and another starts. How he has a career as a narrator is beyond me and only my love for this series has allowed me to continue listening.

I was on the edge of my seat and cannot wait for the Next book!

There is so much momentum in this book! The action never slows, but the sub-plots are woven in so that it all fits so seamlessly. I feel like I have a good grasp of who the characters really are, to the point where they feel like real people. This book kept me reading (well, listening) into the early morning hours, as I could not put it down.

Joseph Morton does an excellent job narrating this book. He brings the words to life, and I’m able to just fall right into the book. I highly recommend this Audible book.

G. Michael Hopf masterfully ties his characters and stories together yet again. it is no one he is a best selling author. This book is absolutely riveting!

This is easily one of my favorite series I've read and a favorite book I read in 2017 out of over a hundred.

The story Just gets better

Although during this series we have had two narrators, both of whom I found excellent I felt having Joseph Morton back as Narrator took me back to the beginning and made the series that more enjoyable.

The story itself took some turns I found interesting and albeit a challenge to how I thought the story would go the changes were good.

Looking forward to the next book