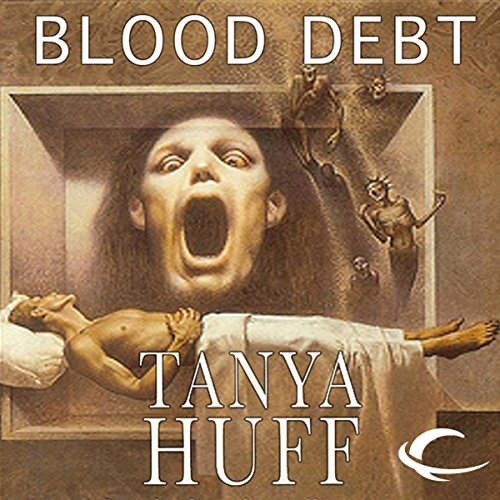 A ghost has invaded Henry Fitzroy's home, beginning a dangerous nightly game in which Henry is allowed to ask a single question. If the answer is no, an innocent and unsuspecting person is killed. Henry soon comes to the horrifying realization that this wraith - and the others who join it - is using him to wreak vengeance on the people it holds responsible for its death.

Henry can’t find the source of these murders on his own, so he calls on the one person he trusts to help - private investigator Vicki Nelson - with the small hope that they can stop these otherworldly forces, without losing their lives.

I would recommend this book. It's funny and gruesome at the same time.

What was one of the most memorable moments of Blood Debt?

It wasn't just one moment...It's the breakup of Henry, Vicky and Tony. Going their seperate ways.

She definetly grew on me. When I first listened to book 1 - I was NOT a fan of her narration at all. But since listening to the next couple of books I have changed my mind. I really like the way she does Vicky. She brings her to life and makes me laugh out loud. But I'm not a fan of her Celluci.

Vicky does make me laugh.

I really like this series. It keeps the action going and throws in some humor.

I really did enjoy the story, but I mostly stuck around for Henry, Tony and Mike. Vicky had too many irritating moments, but I suspect that I found her that way only because of the narrator's over the top manner or portraying her. Not to mention that she did a really lousy job portraying Tony.
My first thought was to also get the audio version for the other Blood books (having read the first two in paperback), but once I saw that it's the same narrator, I'll stick to the hard copies :(
On the other hand, I highly recommned the Smoke and shadows books in audio format, the narrator does a great job with them!

Nice tie up of series

Huff uses surprise and humor to advance the characters relationship. Some issues are resolved and others are not. Enjoyed this ending.