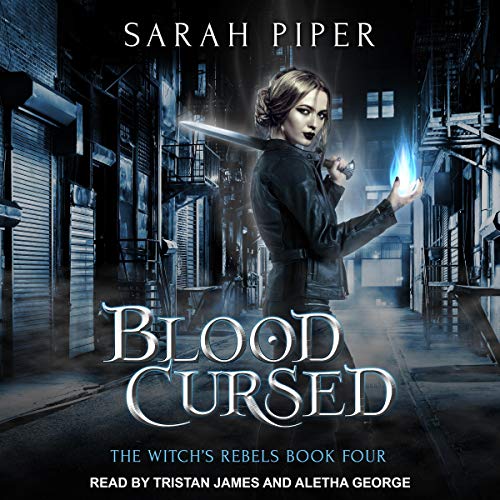 By: Sarah Piper
Narrated by: Aletha George,Tristan James
Try for £0.00

"My whole life, you've been making deals for my future - for my soul - with other people. Now, you're going to deal with me."

The prince of Hell has been gunning for a Silversbane heir for decades - a witch whose blood can summon the spirits of the most powerful magic users ever to walk the earth. A witch like me.

Thanks to a soul-shattering devil's bargain, I'm now his most prized possession. But I've got bigger fires to fight than the ones burning in Hell.

My friends are still imprisoned. Hunters have joined forces with the dark fae, and the council has turned its back on us. One of my rebels is now forbidden to love me, and another can't remember that he ever did. Mix in an epic betrayal and a few dark secrets, and I'm ready to burn it all down.

So yeah, maybe the prince of Hell is used to closing deals and getting what he wants. But when it comes to this Silversbane witch?

What listeners say about Blood Cursed

I teally enjoyed this book more so than the previous one. but why did the wolf have to die? the heroine seems to be a bit feckless. I do not like the male narrator's voice, it is taking ages to get into his rythem but I hope the next book is better.

They get better and better

Like I said with the last book, I'm spending a fortune on these books as it isn't time for a new credit and it is oh so worth it!!! Just got book 5 and starting it now.

I truly was transported into Grey's world. Each word had me captivated...literally on pins and needles wondering will everything be ok. I literally cried throughout the entire book only at the end to have my heart crushed...😥. I can't wait for the next book...it cant end like this.

loved it so much cant wait for the next one to come out totally recamend.

Absolutely amazing abg funny series. Perfectly Steamy scenes. Can't wait for the next book in the series. Love it! Love it


Take a chance and read it!!

Love these books!!! I'm so engulfed in this whole story (world) of Gray's and the guys that I really need to know more!!! Amazing how the writer and the narrators are all so talented!!!