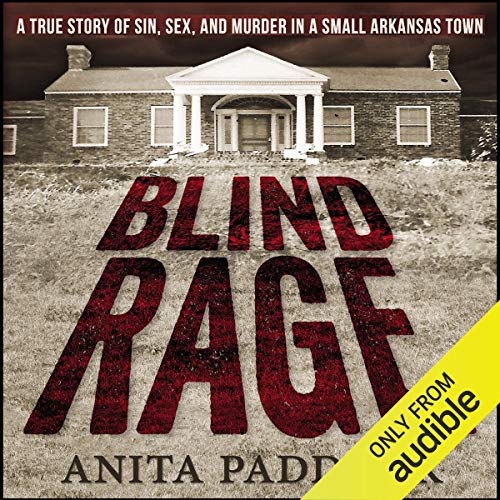 A True Story of Sin, Sex, and Murder in a Small Arkansas Town
By: Anita Paddock
Narrated by: Kevin Pierce
Length: 3 hrs and 55 mins
Categories: Non-fiction, True Crime
5 out of 5 stars 5.0 (2 ratings)

When Ruie Ann Park - a pillar of the Van Buren, Arkansas, community - was found beaten to death and lying in a pool of blood in her home, the police and local residents assumed her son was the murderer. But the years would uncover a more sinister story. Up till that night, the Park family seemed to have it all.

For 50 years, they owned and published The Press Argus newspaper. Hugh was well-connected politically and his wife, Ruie Ann, was the local historian, journalist, and teacher. They had a brilliant son and a shy adopted daughter. They built a beautiful home on top of Logtown Hill with a vista overlooking the Arkansas River, but their idyllic life ended with divorce. Ruie Ann stayed in the home, becoming bitterer and more demanding of the daughter who couldn't match up to her beloved son. The son, Sam Hugh, had a promising legal career but his fondness for young boys, alcohol, and drugs doomed what should have been a successful law practice in his hometown. The daughter, Linda, graduated from college, married an attorney, and moved away to a small town near Little Rock. The police were baffled. Who was smart enough to hide all evidence and pass the lie-detector test? And who would want to bludgeon this mother to death?

What does Kevin Pierce bring to the story that you wouldn’t experience if you had only read the book?

Mixed thoughts felt something missing in the story

* I received a free copy of this audiobook through Audiobook Blast dot com in exchange for an honest review.

In May 1981, Ruie Ann Park’s body was found by her adult son in a pool of blood in her own home. Her home was located on top of Log Town Hill overlooking the Arkansas River in Van Buren, Arkansas.

She was beaten to death and left for dead. The police and townspeople assumed her son was the murderer. Why?

This murder took place in an era where being gay was proof of being deviant and therefore he was an easy target for law enforcement.

But the years would uncover a much more sinister story. Until the night of the murder, the Park family seemed to have an almost perfect life. For fifty years they were the owners of "The Press Argus" newspaper.

Hugh Park was connected politically and his wife, Ruie Ann, was a local historian, a journalist, and a teacher. They had a biological son who Ruie Ann thought was brilliant and could do no wrong. The couple also adopted a daughter, named Linda who seemed to become the father's favorite.

Their golden life ended in divorce and the children remained with Ruie Ann, who stayed in the marital home, becoming bitter and more and more demanding of the daughter who couldn't seem to up her mother's expectations.

The son, Sam Hugh, had once had a promising legal career but this ended because of his penchant for young men, alcohol and drugs.
It was this history that set him firmly in the sights of law enforcement when his mother was murdered.

In comparison, adopted daughter, Linda, seemed to have a much more normal life. She graduated from college, married a lawyer and moved a few hours away from her overbearing mother.

So, if it wasn't the 'degenerate' son, who killed Ruie-Ann Park? If you don't already know the ultimate outcome if this murder case, the answer will surprise you.

I enjoyed listening to this audiobook and thought that the author did a terrific job of describing both the Park family's history as well as the complex family dynamics. She was able to stick to the facts and weave them into a compelling tale that listeners are able to follow easily.

The narrator, Kevin Pierce has the perfect voice for true crime audiobooks. He seems to have an ingrained sense of which words and sentences to emphasize, as well as a gift for pacing. His voice never overwhelms the story itself which allows the listener to focus not on the voice, but on the content of the audiobook. I rate the narration of this audiobook as 5 out of 5 stars. ⭐⭐⭐⭐⭐

My only complaint is that after the author spent so much time detailing the family history, it seemed like once the murderer was arrested (three years after the crime took place) the story starts to have huge holes in it. Listeners/readers are not given detailed information about how the death of another family member took place. It is eluded to that it was a suicide, but no details were given. I believe this information should have also been included. Also, once the murderer is arrested there is barely any information about the legal process. I would have liked a few more details.

Where does Blind Rage rank among all the audiobooks you’ve listened to so far?

This is a solid audio book, and if you like true crime, you will enjoy it.

Linda is the most likable character, and it is very easy to feel for her and her suffering.

Kevin Pierce did a solid job on this, it was enjoyable and kept my interest.

A Small Town Shaken by a Shocking Murder!

fruit of the poisoned tree

This is excellent true crime reporting, but it is also, (and this is what sets this book apart) the story of the repercussions on the children of an entirely dysfunctional family. The author presents the stories of these now adult children along with the events surrounding their mother’s death with care, intelligence, compassion and sensitivity, thus making this a truly excellent book.

Kevin Pierce gave his usual impeccable performance, as expected, since he is absolutely perfect for this kind of nonfiction.

I received a copy of this book in exchange for this unbiased review via the courtesy of AudioBookBlast dot com.

Yes I like that the people involved with this true crime story seemed more real to me in audio book form.

What was one of the most memorable moments of Blind Rage?

Finding out who the killer was. I was floored. I'm not sure who I thought did it but when I found out I thought it was shocking. This was a good true story to listen too.

Kevin Pierce is a great narrator. I love listening to books that he has worked on.

Yes I thought that the daughter, Linda was belittled and abused by her mother and her husband. I felt sorry for her through out the entire book.

What made the experience of listening to Blind Rage the most enjoyable?

It was enjoyable because though the story is true, you do not know who the killer is.

This is a cast of real people.

His reading of the story brings the people to life and has a voice I can listen to for hours.

When Howard brings his son in the car. I was outraged at his meaness and lack of caring for a child.

What did you love best about Blind Rage?

I was gripped by this book. Wonderful characterisation and excellent narration.

It had a raw honesty.

No, I haven't listened to him before as far as I know. I love his voice and he reads beautifully. I certainly hope I get the opportunity to listen to him again.

That the unhappy and damaged, still have less empathy than the privileged

Good book but something is missing in this story

I have never read the print version

Yes, he is my favorite. I go out of my way to find his voice over on all of my books.

Almost, it was interesting from start to finish although it seemed they jumped right to the end

The author seems to dwell on the fact that the son/brother was gay. It's stated that the police suspected the son/ brother for the murder but there was nothing written on the police investigation.

The author changing the name of the children was pointless. This is suppose to be true crime.

I gave the over-all rating 2 stars only because of the narration. Otherwise it would have receive 1.

So Powerful and So Very Sad

Could not stop listening to this story. Lifelong abuse and the consequences~no one wins. Sam Hugh and Linda's lives were truly heartbreaking. No words can express my dislike for Howard~IMHO, a truly evil human being. The narration by Kevin Pierce is amazing. Am grateful for the epilogue which in a small way gives hope to an otherwise devastating situation. HIGHLY RECOMMENDED

Audiobook provided in exchange for an honest review....

Sad story. I had not heard of this when it really happened. It doesn't go very in depth but I didn't find. It still told me all the facts that I needed to understand what happened. The author doesn't try to dramatize anything. She just tells the story. I did go online to try to find out more but wasn't successful.