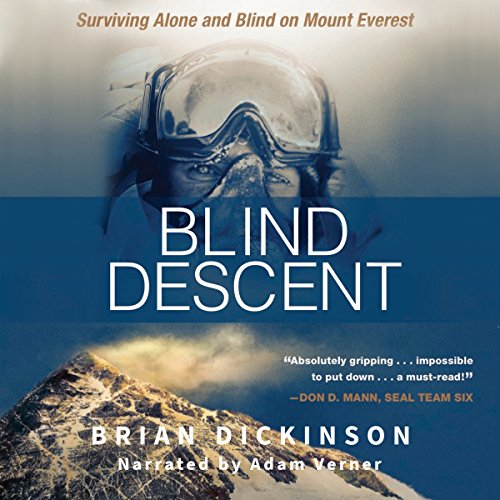 Former Navy Air Rescue swimmer Brian Dickinson was roughly 1,000 feet from the summit of Mount Everest, also known as "the death zone", when his Sherpa became ill and had to turn back, leaving Brian with a difficult decision: Should he continue to push for the summit or head back down the mountain? After carefully weighing the options, Brian decided to continue toward the summit, alone. Four hours later, Brian solo summited the highest peak in the world. But the celebration was short lived.

After taking a few pictures, Brian radioed his team to let them know he had summited safely and began his descent. Suddenly, his vision became blurry, his eyes started to burn, and within seconds, he was rendered almost completely blind. All alone at 29,035 feet, low on oxygen, and stricken with snow blindness, Brian was forced to inch his way back down the mountain relying only on his Navy survival training, instincts, and faith.

In Blind Descent, Brian recounts his extraordinary experience on Mount Everest, demonstrating that no matter how dire our circumstances, there is no challenge too big for God.

I thought this would be a really exciting listen but along with the narrators voice and the dull story line it wasn’t for me. It had to much background, a lot of talk of his faith and little of the mountaineering.

Narrator sucks the life out of the story

I’m sure this is meant to be a gripping story of adventure but the narrator is better suited to a child’s nursery rhyme. Too slow paced for me unfortunately.

An amazing true story of courage, perseverance and faith, that had me in tears before the author had even reached Everest. The emotion and love he felt for his family came through wholeheartedly. His words and the excellent narration made you feel what he felt, especially the emotion behind the hidden message he left for his family incase he didn't make it back. The reaction of his children to him leaving pulls at your heart strings and the support and love shown by his wife was beautiful. The narrator managed to capture and expresses the emotion of the story excellently. The author interweaves his experiences and lessons learned during his military career, with the story of his solo assent of Everest and the beliefs that ground his life. Although I can not fully understand the draw of climbing to the top of the world (or up any mountain for that matter), I can understand the beauty and austerity of the landscape, as well as the need to challenge oneself and complete what you feel committed to. The courage, faith and self control shown during his blind decent of Everest is awe inspiring and far beyond my comprehension. This author not only gives you an inside look at the fortitude it takes to survive the Earths highest mountain, but he also takes you on a journey laced with faith, love and family. I received this audiobook from the author at no cost in exchange for an honest review

What made the experience of listening to Blind Descent the most enjoyable?

I had some difficulty with the beginning of this book. However, once the story got into the trip to and climbing of My. Everest, I didn't want to put it down. Great story.

Awful narration ruined this story for me.

Although a devotee of mountaineering stories, this one was boring, uninteresting, and a bit too religious. Perhaps better narration would have captured my attention more.

This book was a very interesting and detailed account of author Brian Dickinson’s assent to the summit of Mount Everest and the temporary snow blindness that occured to him shortly after reaching the summit when he was all by himself.

I received the Audible version of this book in exchange for an honest review. I liked the book quite a bit however in all honesty I expected more from it. It is truly a fascinating story but I felt like it took too long to get to the good part…the reason I was attracted to the book was to find out what happened with the blindness and how he overcame it. The details of the climb leading up to the climax are good and I learned a lot about climbing but I would have preferred more time be spent on what happened to him. I also felt like there was an excessive amount of detail about other events in the authors life from his Navy days that did not relate to the main story at hand.

All in all, a very good book especially if you have an interest in climbing.

This was a really great book. I listened to the Audible audio version, and the narrator was really good - good pacing, good reading style, pleasant voice. I would definitely listen to more books narrated by Adam Verner. The book itself was really good. It presented a different view of mountain climbing than I had heard before - putting faith and family first, appreciated God's creation, and that summitting isn't the most important thing. The book kept me on the edge of my seat as the author described his trek up and down Mt. Everest. It was really refreshing to hear such great things about the author's wife and kids, and to see such a supportive family. If you love mountain climbing, adventure, or non-fiction/memoirs, I highly recommend this book.

I couldn’t stop listening!! Even my children had to know what was going to happen next. They’re hoping a movie is coming next!!

Too religious. Not interested. Returned it. Didn't love the narrator either, but didn't listen past the first Psalm.

for such an amazing story, the book was an absolute bore and the narrator was ridiculous and very hard to listen to. disappointed to say the least.

Has its ups and downs

A bit pretentious at times but enjoyable at many others. Some content does get repetitive and doesn’t keep the readers attention.