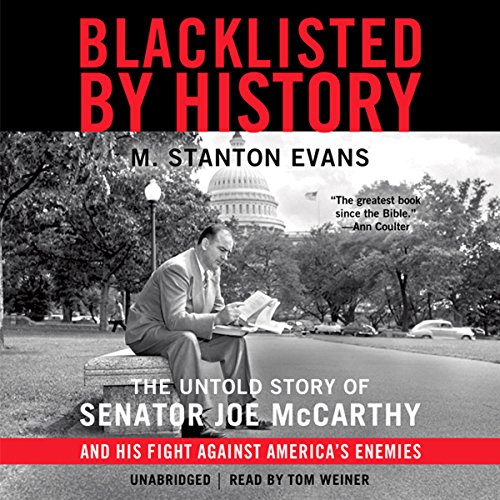 Accused of creating a bogus Red scare and smearing countless innocent victims in a five-year reign of terror, Senator Joseph McCarthy is universally remembered as a demagogue, a bully, and a liar. History has judged him such a loathsome figure that even today, a half-century after his death, his name remains synonymous with witch hunts.

But that conventional image is all wrong, as veteran journalist and author M. Stanton Evans reveals in this groundbreaking book. The long-awaited Blacklisted by History, based on six years of intensive research, dismantles the myths surrounding Joe McCarthy and his campaign to unmask Communists, Soviet agents, and flagrant loyalty risks working within the U.S. government.

Evans’ revelations completely overturn our understanding of McCarthy, McCarthyism, and the Cold War. Drawing on primary sources, Evans presents irrefutable evidence of a relentless Communist drive to penetrate our government, influence its policies, and steal its secrets. Most shocking of all, he shows that U.S. officials supposedly guarding against this danger not only let it happen but actively covered up the penetration. All of this was precisely as Joe McCarthy contended.

Evans shows that practically everything we’ve been told about McCarthy is false, including conventional treatment of the famous 1950 speech at Wheeling, West Virginia, that launched the McCarthy era, the Senate hearings that casually dismissed his charges, and much more.

In the end, Senator McCarthy was censured by his colleagues and condemned by the press and historians. Blacklisted by History provides the first accurate account of what McCarthy did and, more broadly, what happened to America during the Cold War. It is a revealing exposé of the forces that distorted our national policy in that conflict and our understanding of its history since.

“Please, America, read this book.” (Glenn Beck)
“[T]he greatest book since the Bible.” (Ann Coulter)
“Evans goes through extensive files and transcripts with complete mastery of complex material and an engaging turn of phrase that makes more than six hundred pages of painstaking analysis both a triumph of historical scholarship and a gripping detective story.” ( Salisbury Review)

What listeners say about Blacklisted by History

A cinematic story, a worthy narrator

Anything but a dry political tale. Evans tells a dramatic story of a man who took on communists within the government, and consecutive administrations who wanted to cover up their mistakes.

Weiner brings that drama to life with one of those “phonebook” voices. There are some books I’ve listened to on here where I would’ve enjoyed them more if only it was someone like him reading them.

If you thought you knew the history, think again!

This book is excelent in its scope and depth, surprising in its revelations and serves as a great reminder, that we need to constantly revisit history!
In the light of recent anti-Trump campaign we need to be vigilant, not settle for mainstream narrative and dig deeper! But most of all, we need to remember. Highly recommended!

Fascinating and important (but super-detailed)

This is a great book but it is a little bit too detailed for my interests. I'm not a researcher or a specialist, so my interest in this topic only extends so far. I had trouble maintaining attention on the book.

However, all of the details here are really fascinating. I appreciate the author's work in making this information available. More people should be aware of this history.

This is truly a untold and riveting account of unimaginable histories. The author and his team have done fantastic work with this compilation of the declassified/public record. This book has absolutely shattered my perception of the 20th century. This book is the gateway to an entire world of untold histories and an awakening process.

My only complaint is the delivery of the message by the narrator. I think it would greatly help to have multiple voices narrate such a complex story in order to separate one voice from another and from the narration itself. I had to backtrack repeatedly in order to catch the full scope of the story and to fully comprehend the message being relayed.

Overall, this is an amazing read. I look forward to reading more of this author's works.

It is terrifying, the left was Communist back then and now I'm afraid that is what we call the Deep State. They are not going quietly and never will. Saddle up!

The Bible on the subject of Sen. Joe McCarthy!

So detailed and in depth, l'm rereading.
This book details how communists infiltrated the highest levels of our government and influenced US actions.

That all the Russian defectors, ex-soviet spies corroborate the infiltration, that it's still being lied about says it all. McCarthy was right on the money. Soviets infiltrated deeper than ever. This is the mother of all Russian collusion.

...until you read this book.

Whatever else you think you know about McCarthy, you cannot express an informed, knowledgeable opinion until and unless you read this book.

Regardless of the side of the political aisle on which you reside, you owe it to yourself as a citizen, and to your country as an informed citizen, to read this book.

You will learn things that will astonish you, and that will call into question virtually everything you thought you knew about McCarthy and that era.

Until most people who think they know about Joe McCarthy are gone, I fear his true story will not find many fans. If a reader of this book has very little knowledge on the subject of Joe McCarthy, that reader will look favorably on Joe McCarthy. I have over the last twenty years, learned so much about the USSR penetration of the USA’s government.
The collapse of the USSR resulted in massive amounts of its secret files being revealed. The truth about the communist influence in our institutions government and cultural during the 20th century is there to see. Few people are interested to know about it.

I'm Glad I Listened Rather Than Read

Evans aims to give empirical proof that those Senator McCarthy accused of spying for the Soviet Union in the 1950s were guilty of it: e.g. two decades of House and Senatorial memos, 1930s Congressional spy investigations, government reports on security, official lists of named security risks, two decades of FBI reports with margin notes, transcripts of FBI wiretaps, notes from political strategy meetings squirreled away in boxes, and so forth. This pastiche of evidence plays the devil with the book's narrative for the first few chapters. So, I'm glad I listened rather than read. In Evan's view, McCarthy was more sinned against than sinning. He conducted his inquiries fairly, did not slander, and did not steamroller anyone. He was an exceptionally bright, lower-class, self-made man who raced through high school and law college. He was a judge while only in his thirties. As junior Senator from Wisconsin (age 41) he threatened to mortify the Whitehouse, Democratic Senate, and State Department, with revelations of a "massive" communist penetration of the U.S. government. Each threatened institution had enough individual power to poleax him. Despite that, the first wave of retribution couldn't touch him, because what he said about communist infiltration was "old news" in Washington circles, and there was years of evidence to prove it. When Democrats lost the House and the Presidency in 1952, McCarthy alienated Eisenhower by soundly condemning George Marshall for losing China, then going after some of Eisenhower's job nominees soft on communism. By 1954 McCarthy held a tiger by the tail and it finally ate him with Republican help.