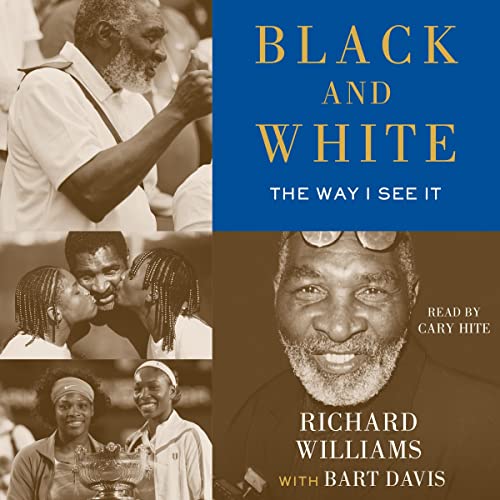 By: Richard Williams
Narrated by: Cary Hite,Bart Davis
Try for £0.00

The fascinating, “upfront and unapologetic” (Kirkus Reviews) memoir of Richard Williams, a businessman, tennis coach, subject of the major motion picture King Richard, and father to two of the greatest athletes and professional tennis champions of all time - Venus and Serena Williams.

Born into poverty in Shreveport, Louisiana, in the 1940s, Richard Williams was blessed by a strong, caring mother who remained his lifelong hero, just as he became a hero to Venus and Serena. From the beginning of his life, Richard’s mother taught him to live by the principles of courage, confidence, commitment, faith, and love. He passed the same qualities on to his daughters, who grew up loving their father and valuing the lessons he taught them. “I still feel really close to my father,” says Serena. “We have a great relationship. There is an appreciation. There is a closeness because of what we’ve been through together, and a respect.”

A self-made man, Williams has walked a long, hard, exciting, and ultimately rewarding road during his life, surmounting many challenges to raise a loving family and two of the greatest tennis players who ever lived. Black and White is the extraordinary story of that journey and the indomitable spirit that made it all possible.

©2014 Richard Williams. All rights reserved. Epigraph from "I, Too" from THE COLLECTED POEMS OF LANGSTON HUGHES by Langston Hughes, edited by Arnold Rampersad with David Roessel, Associate Editor, copyright ©1994 by the Estate of Langston Hughes. Used by permission of Alfred A. Knopf, an imprint of the Knopf Doubleday Publishing Group, a division of Random House LLC. (P)2021 Simon & Schuster, Inc. All rights reserved.
Sports
Show More Show Less

What listeners say about Black and White

This Needs to Be a Netflix Series!!!!

I loved this book, its way better than the film King Richard, it let's you know how & why Richard became the man he is.

simply amazing .... I listened to this in one day. ... very inspirational story

One of my favourite books ever

Incredible book. Nice narration. But this version has a LOT added/differing from the original version. Strange.

Must read by everyone... his name is Mr. Williams

This book has opened my eyes to so much. I finally found a kindred soul and I can denounce those who feel I’m dreaming past my capabilities. Just like Mr Williams I to know I’m supposed to be great and create opportunities for others. This book is a must read... by every race, color, and creed. I will read it a second time and take more notes . I don’t plan on failing... amen

leaves one with questions.

very interesting autobiography stories. However,
Richard Williams has many many children from many women that are omitted in this autobiography.

The omission of his parental responsibilities to these unmentioned children make this story incongruous to the moral principles preached in this book.
it is an enigma-
it is a good book w/good take always but an enigma.