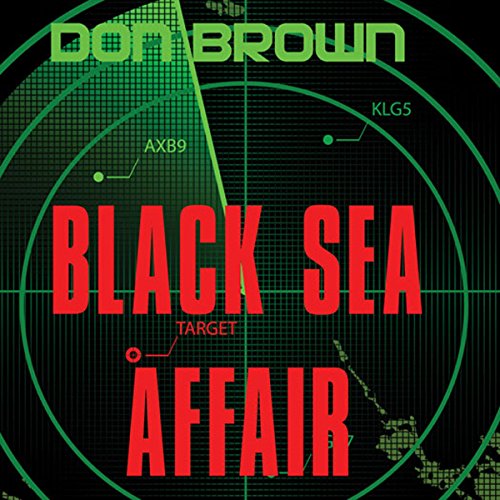 As the U.S. Navy searches for weapons-grade plutonium that has been smuggled by terrorists out of Russia, a submarine mishap in the Black Sea brings the United States and Russia to the brink of nuclear war. It is a race against the clock, with Russian missiles activated and programmed for American cities.

Excellent and captures your undivided attention

Would you listen to Black Sea Affair again? Why?

Yes. It was exciting, and it is worth another listen.

The sub skipper and Brewer. I liked their guts and personalities

Have you listened to any of James Adams’s other performances before? How does this one compare?

If you could rename Black Sea Affair, what would you call it?

Because I served as a Navy JAG about 10 years before Don Brown did, I was keenly interested in the U.S. Navy aspects. It actually brought back memories and was extremely enjoyable for me.

What was one of the most memorable moments of Black Sea Affair?

Would you be willing to try another one of James Adams???s performances?

No, NEVER, NOT EVER AGAIN. HE speaks bristish English with an American book ti just does not fit. Does not truly understand American English and it way of saying things. Most absurb redention of southern person speaking. His reading was so poor had to leave story several times to rest listen to something else then come back again.

The book disappoints on many levels

I bought this book thinking it was by Dan Brown (Digital Fortress, not Da Vinci Code), not Don Brown. I have since become acquainted with who Don Brown is. As a Christian myself, I sincerely wish him the best in continuing to develop his writing. I was not bothered by the Christian references like some reviewers, although the heavy way in which his faith was pasted on the characters was a problem. Virtually all of the good guys are believers (in Christ) and the bad guys are evenly split between drunk Russian atheists and Islamic jihadists. The story is largely implausible. The characters speak in trite ways. For instance, imagine you have a 6th grade writing class, and one of the kids in your class is the girl who always plays the lead in class plays. You give her the assignment of drafting a stirring speech that a submarine commander might give his crew before departing on a dangerous mission. You tell her to make sure it is filled with over the top patriotism and heroic anticipation. You will probably get what Brown has Miranda say to his crew.

In terms of performance, the narrator does a decent Russian accent (not accurate, just decent, and consistent). Unfortunately, he tries to affect an American accent at times, and just ends up sounding high-pitched and nasal. If I were to apportion the reasons for my low rating of this book, I would say narration 25%, bad story/characters/writing 75%.

The biggest problem is the story itself. Spoiler alert (somewhat). We always need to suspend disbelief, but we need some help from the author. What would be the best way to intercept stolen plutonium from smugglers (note: you're not even getting it back from the terrorists, just the smugglers who are going to deliver it to the terrorists)? I'll just give you two choices: Drop a clandestine seal team in to do it quietly, or send a billion dollar nuclear sub to sink a ship in "enemy" home waters?

Now, on to technical matters. Do we have a right to quibble about the accuracy of the technical information? I say "yes". This is, after all, a techno-thriller. It behooves the writer to get the technical information mostly right. I'm not saying that if the writer gets the color of a knob wrong in the cockpit of an F-15 that constitutes an epic fail, but how hard is it to get basic facts straight? Is it that hard to run your dogfight past at least some kind of a pilot? The aerodynamics just don't make sense to me ( I am a pilot). At one point, the Mig-29's climb to 7200 feet to get above the range of surface to air missiles (Gary Powers was shot down in 1960 at ten times that altitude). Others have pointed out that an air to air missile shouldn't change from a sidewinder to a stinger back to a sidewinder.

One of my biggest problems is the nuclear weapons aspect. Since it is the focal point of the novel, I think it deserves the most accuracy. Now, I hope the author isn't going to hide behind some kind of excuse like "Well, I don't want to tell terrorists how to make a nuclear weapon, so I intentionally described it so it wouldn't work." My first clue to the author's lack of knowledge and research in this area was the discussion about the amount of plutonium stolen. It was described as enough to make 4 or 5 thermonuclear weapons, or one hydrogen bomb. Unfortunately, a thermonuclear bomb and a hydrogen bomb are the same thing. He possibly could have said 4 or 5 atomic bombs, or 4 or 5 fission bombs. The discussion of the "technical marvel" of the hydrogen bomb assembled by the terrorists was totally laughable. Brown has the brilliant terrorist assemble five plutonium fission bombs in a circle. Each atomic bomb has a jar of lithium deuteride next to it outside the circle of bombs. Lithium deuteride is an appropriate fuel for a hydrogen bomb, but its use in this way is nonsensical for a couple of reasons. The biggest problem is that his design for the individual atomic bombs won't work at all. In the novel, each atomic bomb consists of two hemispheres of plutonium sitting next to each other, but not touching. He has simple dynamite placed next to the hemispheres, so that when the dynamite explodes, it will push the two halves of the plutonium sphere together, resulting in a critical mass, and achieving an fission explosion. But that is impossible. It is well known, and easily discovered that the Manhattan project knew that the gun design (using uranium) as used to bomb Hiroshima wouldn't work with plutonium. Plutonium reacts too fast to slam two subcritical parts together fast enough to produce an explosion. Even if done in the best way (Little Boy gun design), it wouldn't work. It would make a big fizzle (very nasty, but not an atomic blast). But Brown's design is laughably amateurish. My non-professional opinion is that even if he sets off the five devices simultaneously, it will achieve little more than a nasty release of radiation that might injure someone standing nearby. But the dynamite itself will present a greater danger. There will be some difficult cleanup, but that is all. The lithium deuteride won't make any difference at all. If a workable implosion device had been described, it is possible that a nearby quantity of lithium deuteride could boost the explosion, but I'm not sure if it would. Being blasted apart by the explosion works against achieving the goal of high pressure and temperature necessary to ignite the nuclear fuel. Ulam's great innovation was knowing that the x-rays which are released ahead of the pressure from a nuclear explosion could be used to create a plasma surrounding the fusion fuel, thus keeping it together and heating it at the same time. He even came up with the idea of a second "spark plug" of additional plutonium in the center of the fusion fuel which would ignite so that the fusion fuel would be subjected to pressure from both the inside and the outside, increasing yield. All this is well known to anyone with a library card and the inclination to check out books. I suggest the excellent books by Richard Rhodes.

I sincerely hope that Mr. Brown continues to refine his craft. Until he does, he will be limited to the niche of readers who are so desperate for a godly book that they will overlook significant deficiencies.

This book was very good. I must admit, my husband enjoyed it more than I did. I got a little bogged down in the politics and technicalities, but he loved it. I am glad I stuck with it, since we have listened to the rest of the series. The author has done an tremendous job of research and putting together an outstanding series. We highly recommend it.

danger, could cause hearing damage

I cannot listen to this narrator any more this is the first in hundreds of listens that I am not going to finish the listen I cannot take it any longer. he shouts in a submarine for every order. everything I have heard so far makes my skin crawl, bad accents etcetera. Deleting book now

Trouble getting past the Narration.

This is an American Navy story with a Snooty British accent...having trouble focusing on story. Navy/Sub knowledge is a little lacking, but when the Uppity British voice is used for an Arkansaw drawl, I nearly puked. Only halfway throught the first half and hope I can stick it out.

probably, but I would tell them my thoughts and let them decide

Who would you have cast as narrator instead of James Adams?

Just about anyone. It was an odd choice having a British narrator for an American novel. Americans now don't pronounce their "r"s. Worse- it seems everyone east of Austria speaks with a guttural voice- very difficult to distinguish characters. I found the most distracting.

The plot was good, but the dialogue was often tedious. Part of that was technically correct- the protocol for giving and receiving order aboard a submarine, part was just plain slow moving, as in the white house discussions. Perhaps accurate as to how it would probably occur, but it doesn't make good listening (or probably reading).

Good for the bargain price

Slow start but slowly pulled me in.

Good but not exceptional.

What does James Adams bring to the story that you wouldn’t experience if you just read the book?

I enjoyed the performance.

Could you see Black Sea Affair being made into a movie or a TV series? Who should the stars be?

Did not get it

Would you be willing to try another book from Don Brown? Why or why not?

Not at this time. The book was not believable. The characters did not interact well and I thought the dialog was clumsy at times.

Why a BBC narrator?

Why would anyone have a narrator with a distinctly British accent read a book about a U.S. military operation? It was so annoying to hear every American character portrayed with a British accent that it was actually hard to concentrate on the story.