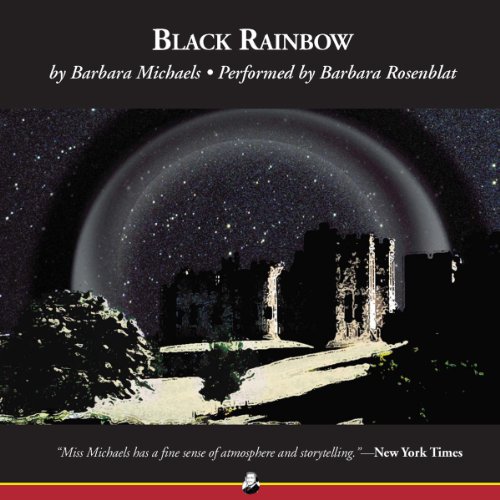 A troubled Byronic hero, a young governess blinded by her romantic obsession, a beautiful but forbidding manor, and a secret as ominous as the black rainbow that frames the huddled towers of the manor in the moonlight are the romantic elements of this Gothic mystery.
©1982 Barbara Michaels (P)1991 Recorded Books,LLC

What listeners say about Black Rainbow

I have not finished listening to this story, but feel that it is a poor substitute for a real gothic novel. Give me Thomas Love Peacock any day. This story it too mundane and leaden for my enjoyment, but well read. Perhaps my expectation and the story were just miles apart.

Not usual Barbara Michaels, still worth a credit

When Barbara Metz/ Barbara Michaels/Elizabeth Peters died I felt I had lost a someone I actually knew. Even her very early work is smart, and funny, if light and still managed to deal with the dark parts of life without being depressing. For example her book the Crying Child has been adapted to film, even though there were no kick-ass heroines. (I love those too). This book is so cynical that reading it is a surprise and difficult to enjoy. Its like biting into a chocolate truffle and getting a mouth full of hot peppers. There is only one character worth admiration in this story, the other female lead is a bit silly and vapid, the hero is narrow minded and vain, and these two are not balanced by sane competent characters. Even the admirable character solves her problems in a way that only desperation would make it ethical.

I began reading Barbara Michaels novels in my early twenties and 50 years later I still reread them from time to time. Under this pen name Barbara Michaels/Barbara Mertz wrote what an old librarian called cozy historical, gothic novels. I love them. Even all those years ago these books were smart, historically accurate and although light, never insulted the reader's intelligence. When she began to write more contemporary and historical mysteries as Elizabeth Peters I loved those too. Barbara Metz earned a doctorate in egyptology at a time when a female doctoral candidate had to be very very good, just to be allowed to apply. So while her books were fun, all of them were historically accurate and made sense. Her Amelia Peabody books are just wonderful.

All of which leads me to this book, and why it is so different from the ones I love to read when I need something cheerful. This is not a story about a hero who admires the spunky, smart heroine, and appreciates the fact that her care of his estates increased his fortune while he was away. Nope. He assumes she is just lucky and begins to spend the money. This book is more realistic and dark than any of her other books. Although I might appreciate the way our heroine handles the problem, the whole thing brought out a cynical sad feeling. I am so disappointed audible chose this book, out of at least twenty of her early books to record. There are early cassette recordings of her early work, so perhaps Audible will be able to give us some of her more usual books. For example the Wings of the Falcon deals with some of the dark sides of history, but also had characters who were not perfect, none of her characters were ever perfect, but they were for the most decent people, who grew into really delightful people

Well-written and held my interest

This book was written in 1991 by Elizabeth Peters writing as Barbara Michaels. The house, Grayhaven Manor, is located in England and reminded me in the first half of "Jane Eyre." But the second half takes some very unusual turns and any similarities to "Jane Eyre" go out the window. The house returns again in "Vanish with the Rose" where it has been moved stone by stone from England to America. I really like the writing style and Barbara Rosenblat's narration. No racy romance here, just an entertaining story. I've been buying and listening to all the audible unabridged downloads of Barbara Michaels' books read by Barbara Rosenblat. Now I'll have to listen to the Elizabeth Peters books I've downloaded and haven't gotten around to listening to yet. She really is a great storyteller.

Jane Eyre with a twist!

A very enjoyable dark story written in four parts in the perspective of the Megan O'Neil who is a governess enamoured with her master Edmund Mandeville, and his sister Jane. The moral of the story seems to be, 'be careful what you wish for'. As always, Barbara Rosenblat brings the story to glorious life. Thoroughly recommended.

I'll buy a book if Barbara Rosen,blat reads it

I've read all of Elizabeth Peter's Amelia Peabody series and hope Barbara Mertz is in a
better place after a long seige with illness. Her stand-alone books are usually written under the name of Barbara Michaels. This is a good one, if a little predictable, with an interesting protagonist. Jane is an exceptionally petite woman who runs the very efficiently mill in her brother's, Edmund's, absence. He comes home from the war, apparently changed. He wants to marry up in society and his almost-fiancee has family titles but no money. Edmund spends lavishly and shuts Jane, half-owner, out of all decisions about the mill. He builds cheap hovels for the workers and starts using child labor. He is unmoved by a cholera epidemic likely caused by the unsanitary, overcrowded living conditions of his workers. When he learns his future bride disrespects him, he cuts ties temporarily and marries Megan, the governess, who came to the estate at his suggestion and possibly because of a prior involvement. Megan loves him and gets her wish to marry him - as the old adage says: be careful what you wish for. Edmund becomes more and more sarcastic, nasty, and dangerous. He is a sociopath who considers only what he wants without caring about consequences to others -- in fact, he blames his victims, saying they bring it on themselves. When Jane finally sees her brother for what he really is, she rises to almost supernatural heights (no pun intended!) to protect Megan. You can see some of the action coming, but that doesn't stop you from getting chills up your spine.

Enjoyable listen from the two Barbaras

I liked Black Rainbow -- definitely worth a listen if you're a Barbara Michael's fan. I prefer her fiction written as Elizabeth Peters, but I've still had fun listening to her books under this name as well. And Barbara Rosenblat's narration is wonderful as always!

you won't mistake this for satire. you might mistake it for boring. but keep listening...

Not my favorite of Barbara Michaels' books. The characters were well developed, but the ending was rather abrupt.