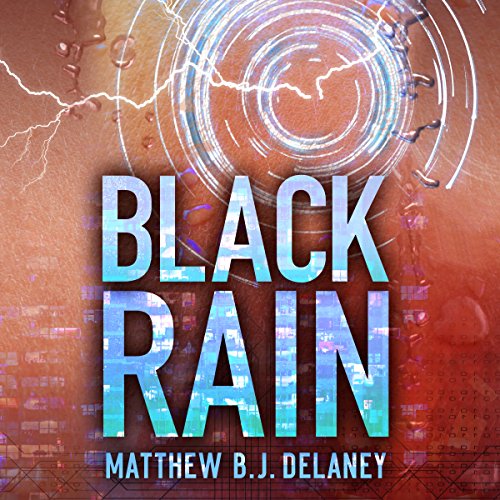 In a darkly warped near future, lucrative disease cures are brokered on Wall Street's Genetic Stock Exchange. And the hottest consumer products are artificially synthesized humans that serve as everything from domestic slaves to combatants in savage gladiatorial games. For Jack Saxton, the young heir to genetic design powerhouse Genico Inc., these Synthates are just a fact of life...until the murder of a high-profile genetic scientist leads a pair of seasoned NYPD detectives to Genico's door.

As a small band of Synthate rebels steps up its attack on the status quo, Jack encounters a pleasure-parlor girl who opens his eyes to their cause. When he dares to sympathize with the rebels, Jack is hunted down and arrested for the murder. Sentenced to die in the brutal games on Bloomberg Island, Jack will be forced to fight - for his life, for the future of all Synthates, and for a chance to uncover the mind-bending secret buried in his past.

What listeners say about Black Rain

It was a difficult story for me to slip into. Mainly because it felt slow, dark, & depressing. The narrator is excellent at giving you that desolate vibe. I ended up putting it down & reading another book. You know how it is. Once I started it again it held my attention. It had some interesting twists (the whole Captain America bit had me in stitches-if you like dark humor then keep going just for that). It wasn’t omg omg must read but fell more into the good book to read whilst looking for the book you really want to read. My husband (a biography and non fiction reader) actually found kept sucking for updates as he found the plot very deep and thought provoking. Hmm-Oh! Narration was good—-> sorry almost forgot that most important detail!

The story was captivating but the ending seemed hurried. Even with the twist I felt it could have been fleshed out better. Other than that a very good story!

Throughly enjoyed the story, very original. Narrator was awesome, not over done or under done... just right

A futuristic murder at a costume party in a posh brownstone in mid-town manhattan. Good stuff...Good start.... Then all the stuff that is really hard to believe happen. I won't go into all of them, as there are quite a few discussed elsewhere, but I will touch on one. The main struggle of this book involves a group of clones who are enslaved (a little like Blade Runner) who want to be given human-like rights. This is all good except everything happens and is decided in New York City. Now don't get me wrong I grew up in New York and I still love it....But it is like the rest of the world doesn't really exist. Really, if the uprising in NY is successful, then the thousands of clones throughout the world will just be free? Hmm.....I am sure all the future state governments and foreign governments all over the world would say, "If they are free in NY, then we will just free them too....".... Ugh....

Was not prepared for this ending. Enjoyed the book, narrator easy to listen to, pleasant voice.

A wild world of natuals made useless and manmade slaves rebelling in senseless strife. Carefully drawn and sometimes accurately.

I just didn't enjoy it.

I can't really explain why. I never got into the story. I didn't care about Jack's predicament. The whole story just fell flat with me.

Futuristic World Of Humans and Synthates

This book is well written with no typos that I noticed. I received it as a free Kindle book choice but would have bought it and will be buying the next book which I assume will be out eventually. Jack Saxton is the son of a corporate giant, founder of Genico, a genetic engineering firm that designs Synthates, also could be called Droids but with lifelike behavior and appearance. The story is about the conflict between humans who consider themselves masters over these non-human beings and the Synthates. There are lots of twists throughout the book but you never see the ending coming, at least I didn't. I was totally surprised but pleasantly satisfied. There is some violence, not much sex, and enough swearing to make it feel real. Several reviewers commented on the use of the eff word but I didn't find that offensive. Maybe it has become so common in the language of books and our every day life that it has lost its shock effect. Readers who are too sensitive to read books with such words are missing out out a lot of good reading. Mr. Delaney is a talented writer and Jack Saxton is a good hero to begin a new series, if in fact that is what this is. The narrator, Will Dacron, was excellent. I had read this in October 20i16 but just finished listening to it.