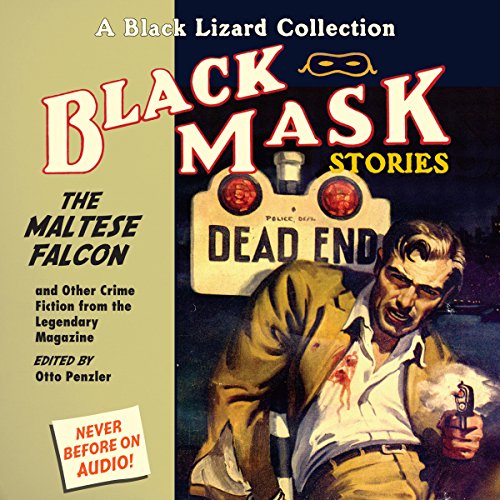 Black Mask 3: The Maltese Falcon - and Other Crime Fiction from the Legendary Magazine

From its launch in 1920 until its demise in 1951, the magazine Black Mask published pulp crime fiction. The first hard-boiled detective stories appeared on its pages. Dashiell Hammett and Raymond Chandler, Erle Stanley Gardner and John D. MacDonald got their start in Black Mask. The urban crime stories that appeared in Black Mask helped to shape American culture. Modern computer games, films, and television are rooted in the fiction popularized by "the seminal and venerated mystery pulp magazine" (Booklist). Never before in audio, these vintage stories are the darkest of the dark, and the best of the best.

Crime fiction fans old and new will delight in rediscovering these taut, character-rich, heart-stopping tales, now on audio for the first time. Includes:

What listeners say about Black Mask 3: The Maltese Falcon - and Other Crime Fiction from the Legendary Magazine

It is a great to have the original serialisation of “The Maltese Falcon.” I think that the pacing of this version is marginally better than in the published novel. An added bonus is the presence of two short stories as fillers.

The narration is excellent and the various characters are well defined though there is a case to be made for a multi-part dramatic presentation.

Where I have issues is with the clumsy chapter divisions. Each Audible chapter contains multiple chapters of the novel. While I think that the editors were correct to include the plot summaries that appeared with the serialisation, they should have been presented as separate chapters as should also have been the case with the individual chapters of the novel. Thus, one could skip the summaries if desired. For this reason I give one less star for the story.
But still, congratulations for making it available.

The Black Mask version of The Maltese Falcon is even better than the version released as a novel. Both are good, but this one was very good. Even if you read/listened to the novel version already, this one is worth it. It is different enough to make it a fresh read.

Falcon is better than the novel

This original Black Mask version of the Maltese Falcon was serialised and longer than the novel, so we get more of the good stuff. Well read, well written.

I Wanted in Intro to the Maltese Falcon

I really enjoyed this on my commutes. I would speed through the episode recaps, but other than that it was easy for me to get into the story. I wanted to finally find out what the Maltese Falcon was about after reading it referenced in a book about San Francisco. I was not disappointed. I enjoyed the two other short stories at the end.