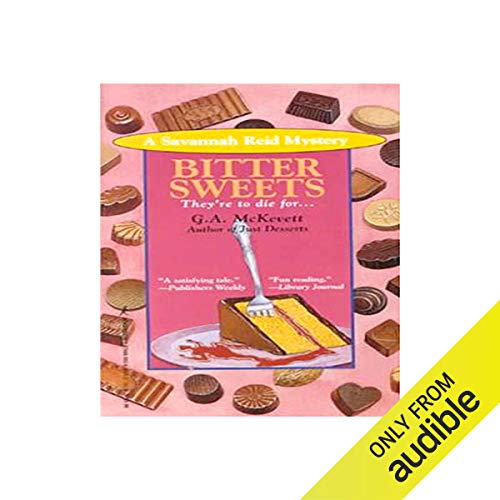 By: G. A. McKevett
Narrated by: Dina Pearlman

Establishing her own business as a private detective in San Carmelita, California, karate expert and sleuth Savannah Reid is hired by real-estate broker Brian O'Donnell to find his long-lost sister, but the case soon becomes complicated by murder.

Didn't know until the end!!

OK I usually can figure out who dun it! This was truly an ending I wasn't suspecting! Light reading. No profanity, the kind of book I enjoy listening to.

Would you consider the audio edition of Bitter Sweets to be better than the print version?

Didn't read the book so I couldn't answer that but the reader truly kept you listening. She's has the character down to a science.

Savannah feeding the liver to the dog.

When the little girl said that her daddy killed her mommy.

The best thing I liked about this book was the return of Savannah Reid. The least was the contrived heightening of tension and the lack of knowledge about 10 year old kids.

As to the first criticism, when a writer sets up tension, it should be undetectable. The ramping of conflict in this novel was blatant. Heres just one example: When Savannah is about to check on the threatened mom and daughter at 5:30 AM, she decides not to bother them because they need rest, despite the fact that she knows the violent ex-husband knows where they are and is actively looking for them. So she goes home, planning to spend two hours making sure that the guy that's with her is her client's brother. Seriously? And then, of course, they get abducted and Reid's in trouble with the police because she helped the ex find her client. I can't believe the reader is supposed to forgive the protagonist for being so stupid. No ex-cop would have hesitated to bang on a door at 5:30 AM.

As to the second criticism, I hate to say it, but no 10-year-old girl would be caught dead in a princess outfit. Even in the 1980s when I taught 10 year old girls, princess outfits were out of the closet by second grade. I understand the play because adults make you do it. But the 10 year old girls I know are already past that and on to leopard prints and leggings. Call it sad, but it's the truth. Perhaps in the 1950s or early 60s elementary school girls still played princess dress-up, but not since then. Watching Disney princess videos are a guilty pleasure that many elementary age girls would swear they weren't doing - they would be humiliated by their peers. The only reason they would be playing with tiaras and tulle would be in the context of a (gag) pageant.

Another thing, if that child is going to get to school by 7:30, which is when most kids have to get to school, that mama had better be up by 6:30 and would probably be up at 5:30 doing last-minute backpack checks for homework and lunch money. If her daughter rides the bus, it would pick her up even earlier and if the mom drives her, they still have to leave by 7 due to before-school traffic.

I see this use of children in novels a lot as a tool to heighten sympathy and tension, and I understand it. I also often see it being misused, as it was here. When an author uses a child character as a pawn to garner sympathy or to heighten tension, they are doing the same thing they are making their "bad" character do; they are de-personalizing the child and using them as a tool.


What was most disappointing about G. A. McKevett’s story?

Lack of research into what 10 year old kids are really like and forcing her character to do things against her own character. I'll try one more book.

Would you listen to another book narrated by Dina Pearlman?

Did Bitter Sweets inspire you to do anything?

I will try to find another McKevett story with no children in it.

I'm a Southerner. The accent is pretty good. Sometimes it's hard to distinguish Savannah's voice from the mom in the story, but that's understandable, and she's not around for long, thanks to the protagonist not wanting to wake her client up despite the fact that her life is in danger. AAUUUGGHH! Makes me so mad!

Still Crude. Thought I would give the author a second chance. Not interested in her style of writing. Won't listen to any more.