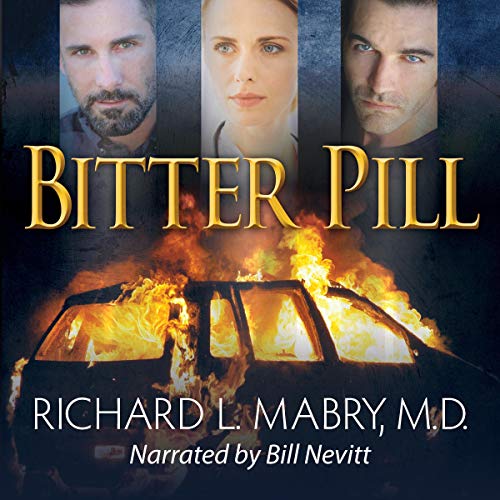 Things were going along just fine.

Until the miracle fouled them up.

“Brother” Bob Bannister is content with his life and his itinerant healing ministry, until one night he finds that the woman who walks off the stage under her own power isn’t one of his shills. At that point, doubts begin to intrude on his previously untroubled existence.

Dr. Abby Davis is tired of her family practice and at odds with God. Dealing with critically ill and dying patients has crushed her spirit to the point she’s ready to quit. But she soon realizes that there’s more to healing than ministering to the physical body.

Scott Anderson was the oldest graduate of his seminary class. Then again, most of them hadn’t turned away from a medical practice, hoping to atone for past mistakes (including his wife’s death) by ministering to men’s souls. Now he hopes he hasn’t made a colossal mistake in switching careers.

Each of these individuals becomes linked to the other, and each finds that God has a purpose for them - but, as it often does, the lesson comes with discomfort.

What listeners say about Bitter Pill

The surgeon dresses the wound...

... But God heals the patient. " This is very much a book which can succeed only if the reader is a fully committed believer in God and, preferably, the Christian faith. Five characters in Goldman, Texas, one female, the others male, reach a crisis point in their lives and have to discover a way to go on. With the exception of Randy, a former conman now working as assistant to one of the others, all have a standing in the community: three are religious ministers and the fourth is the local doctor. Each finds a little ease talking with another in the group and, of course, in prayer. The story felt forced, motivations only slightly touched upon but already related actions were often repeated, taking space in this novella which would have been better emp!oyed with furthering the characterisation. Although most definitely not saying that prayer automatically puts things right according to our own desires, it very much pushes hard the idea that 'we are all part of God's master plan' and we should change our attitudes rather than telling God what to do. All very laudible, perhals, just far too much of it for someone wanting a story rather than a sermon. Bill Nevitt is a talented narrator, with a warm presence, pleasant accent, good, nuanced articulation and the ability to bring life to characters through his individual voicings of them. But even be was unable to make this short book of personal life crises feel meaningful an real. Unlike Richard Mabry's other works, it was too much a long winded parable instead. I was fortunate in being freely gifted with a complimentary copy of Bitter Pill by the rights holder, at my request. Thank you. It was an easy read and the ideas certainly had merit: it was just too heavy handed with the religion, too vague about the mundane motivations

This is a good, thought provoking book. Three people, seemingly very different, are brought together through one pastor. "Brother" Bob Bannister is a fake, paying people to pretend to be healed during his services. Scott Anderson was one an up and coming surgeon. After his wife's death, he turns from medicine to become a minister. But, is his a true calling or just a way to escape his past? Dr. Abby Davis is a Doctor, but more and more, she is called upon to also act as prayer partner and counselor to her patients. This book has a little bit of mystery, a few sad moments and a lot of Biblical inspiration. The author does a good job of weaving the main characters together as they each try to come to terms with God's will in their lives. This was a quick, well-written read and a good break from a lot of the heavier books that I tend to read. The narrator does a good job, but some of his female voices are a little grating. All in all, he does a good job and his narration keeps the action going at just the right pace. I was given the chance to listen to this audiobook by the narrator and chose to review it.

Great story that makes you think

I really enjoyed this book. The situation that the story flows through is very relatable. The author navigates these issues well and doesn't ignore the hard questions. I won't give away what the story is about, but I took time after this book to think about some of the questions that it poses. Bill Nevitt did another great job on performing the book. I received this audiobook for free in exchange for an unbiased review.

This was a Bitter Pill to swallow

The Narration of female characters bordered between comical and insulting. It’s been a long time since I’ve heard such disconcerting narration. I figured it only 3+hours “How bad can it be?” Bad..very very bad. The story is a Christian crisis of conscience/faith tale cloaked in something resembling a medical story. Maybe IF the book is read instead of narrated it may be much better. For example two women were speaking to each and I couldn’t tell one from the other. **I was given a free copy of this book in lieu of an honest review at my request.

Three very different people, a doctor who is getting tired of her family practice, a priest who used to be a doctor but is trying to amend for what he thinks are his sins, and a man of the cloth that is tired and ready for a younger person to take over. Three different tired people, that all end up in one place, their faith. Three people that need to take the bitter pill and get on with it. This book was set up well and is very interesting, you won't want to put it down. The character development was awesome, you really get to know all the characters as if you are their best friends, the one they tell all their secrets too. If you are lucky enough to get the audio version narrated by Bill Nevitt than you really will get lost in the story as he has a way of transforming you to that place and time to live with these characters, it is truly amazing. Which ever format you choose you won't go wrong with this book.

I was gifted this audiobook with the understanding that I would leave an honest review. I liked this book well really more of a novella. The genre I would say for this book is Christian mystery or suspense. As a Christian myself I had no problem with the dialogue but at times it was a little strong bordering on preachy. The story was wonderful, funny at times, and deep in meaning too. I enjoyed the narration of the book as well. Bill Nevitt is a wonderful narration and this book is no exception. I know this is not a series but I really enjoyed the character Dr. Abby and would like to see more books with her in them.

I expected this to be more of a mystery than a religious book. That being said, it is a wonderful and wholesome book about faith in God - with some mystery thrown in. I was voluntarily provided this review copy audiobook at no charge by the author, publisher and/or narrator.

Really good story with excellent narration that brings the characters to life. Looking forward to the next audible

Faith and the Power of Prayer

Right up front here, I have to admit that when I requested a free review copy of this audiobook, I was under the impression this was a medical mystery/threiller-type story. After I received the review copy and started listening to it, I realized that this is more a religious/faith-type story. With that in mind, this is my voluntary review. I do wish the story had a larger mystery plot. While I'm not a religious person and I don't believe in prayer, I respect people who do have faith. This book is written with people like me in mind, I believe. It is not preach-y or offensive. It is more about individuals in crisis. Will they be able to work through these crises with faith and prayer? The story Dr Mabry has written is much too short. There are many elements of the story that could and should have been fleshed out. Many plot points are left hanging and incomplete. While there is character development, it could have went even further. The ending feels too rushed. There are too many unanswered questions. While the main theme is good, the secondary elements left me wanting more. The narration by Bill Nevitt is good. He does a very nice job of creating unique voices for the characters. I liked the performance, despite a tendency to over-enunciate.

A test of faith

For those against religious beliefs, or Christian faith, this may not be story for you. It highlights the deliemma a number of people have, due to a change in circumstances, which affect their view of God, and his hand in those changes. Thus the use of the heading "A bitter pill", being some thing forced upon the individuals, so their lives, in the end may become better.

Many question their faith in this medical mystery

I really enjoyed this book with its realistic Christian basis combining matters of people not sure about God's direction for their life when they and/or people around them are facing medical problems.. I think that the way that the narrator did a great job that really made the story, live. A very good read.